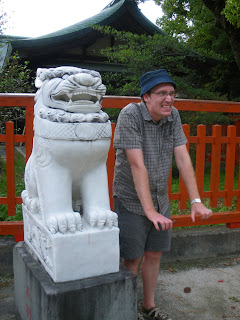 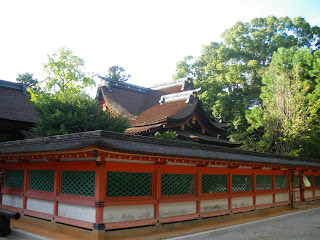 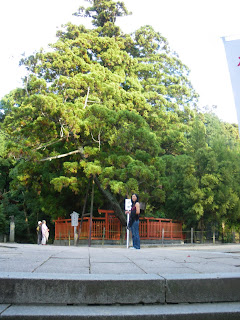 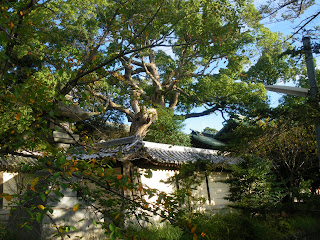 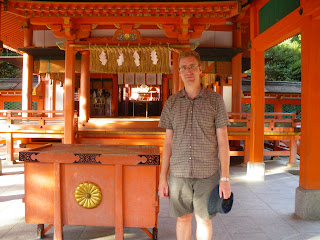 There is a pretty decent Shrine called Kashii Miya just a few minutes from our place on bikes. Its got some attractive buildings and is built on the site where one of Japan's Legendary Emperors is said to have died in the year 199. Natsume Soseki, one of Japan's most famed novelists of the early 20th century, visited the shrine and wrote a poem about a sacred cedar tree that still grows there.

I took a few pictures, its the end of October but the weather is still warm with daytime highs in the low to mid-20s. As an interesting sidenote, due to the fact that most of my classmates come from tropical or semi-tropical countries I am one of the few people in the program who consider this to be warm weather.
Posted by Sean at 1:43 AM 1 comment: 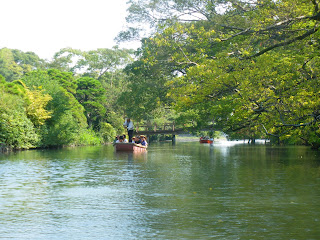 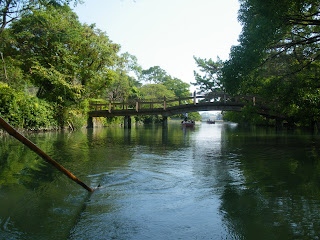 Today we took a trip to Yanagawa, which is a small city about a 45 minute train ride south of Fukuoka.

Yanagawa is famous in Kyushu for its canals. These are mostly the remnants of the moat of a feudal castle that used to be here. The castle was destroyed in the 19th century but several kilometres of moat still remain and are now the city's main tourist attraction.

They are probably about a hundred or so boats that are propelled by nothing more than a pole that the driver uses to push against the bottom of the canal, much like gondolas in Venice. A boat ride down the Yanagawa canals takes about 70 minutes and goes through some quite attractive scenery. The driver everyone the history and local sites of interest as you pass them. Each time we passed under one of the dozens of bridges he had to duck: 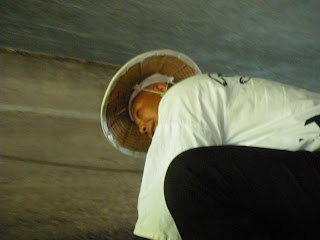 It was a very enjoyable way to spend the afternoon.

At the end of the ride we stopped in a restaurant to try some of the local delicacy, eel: 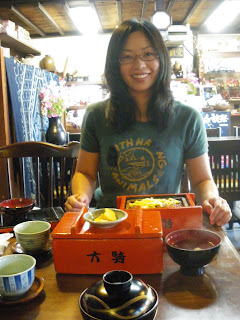 After that we went over to see the Ohana villa. Its basically a really nice old villa from the 17th century with a garden. Sometime in the late 19th/early 20th century a western style building (which is now actually the main attraction) was added. Its a fairly picturesque place, except for the ugly concrete hotel next door: 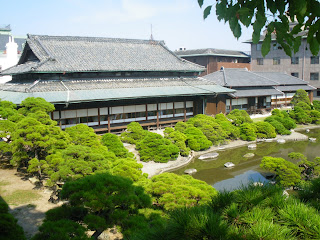 Email ThisBlogThis!Share to TwitterShare to FacebookShare to Pinterest
Labels: Yanagawa 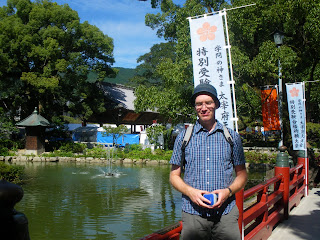 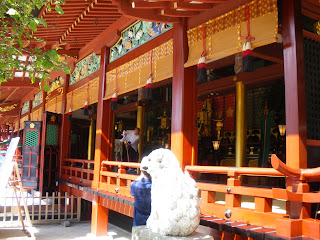 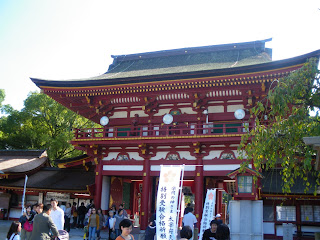 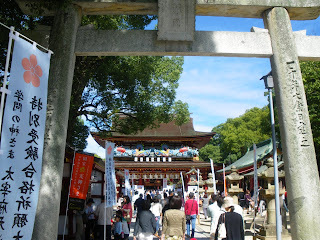 Yesterday we went to Dazaifu, which is a big shrine not too far from Fukuoka. These are some pictures of it above. It is dedicated to Suguwara no Michizane who was a member of the Imperial court in Kyoto exiled to Kyushu by some of his political enemies about 1200 years ago. He died a couple of years later and thereafter a whole string of natural disasters hit the country. Opinion at the time was that the disasters were the result of Michizane's spirit's wrath, so they dedicated the shrine to appease him.

Anyway, its an interesting enough place, though as the Lonely Planet guidebook says its only got about half a day's worth of stuff to do. We went on a Sunday, so it was quite crowded, though it would probably be a lot less so on the weekend.

There is also a Zen temple near the shrine that we visited called Komyouzenji. Its got one of those gardens with the finely raked gravel. This is a picture of it below. There is a funny story about this picture. While I was taking it I started backing up trying to get all the scenery into the frame. I'm going back....going back....going back....and then all of a sudden I hear the one sound that you do not want to hear when you are walking in a Zen garden: "Crunch". 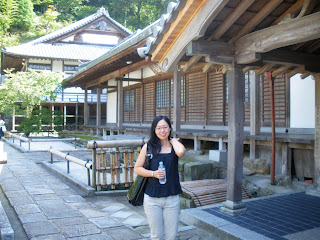 Yes, you guessed it, I had trod upon the gravel, leaving a size 10 and a half footprint for all to see.

Fortunately though I hadn't stepped on one of the really finely raked parts of the garden, where every little pebble has been painstakingly placed into the right position. I think they deliberately refrained from putting much effort into this portion because they knew it was the part that idiot tourists were most likely to step in when trying to take pictures.
Posted by Sean at 5:24 PM No comments:

Email ThisBlogThis!Share to TwitterShare to FacebookShare to Pinterest
Labels: Dazaifu 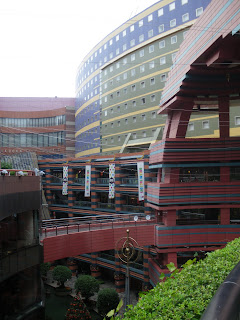 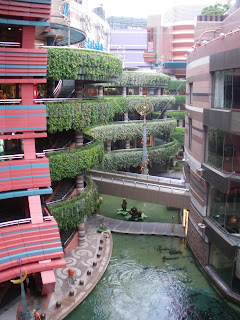 Yesterday we went to Canal City, which is one of Japan's modern architectural wonders. Its a bunch of buildings centred around a small canal that together form a huge outdoor shopping mall with a lot of interesting vistas. Its a fairly photogenic place.

We also biked around downtown Fukuoka, which is a bustling urban centre. These are some pictures taken from a bridge in the Nakasu district near Canal City: 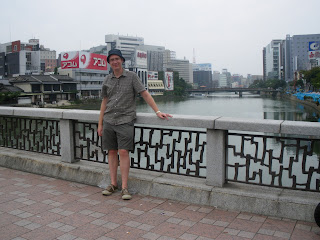 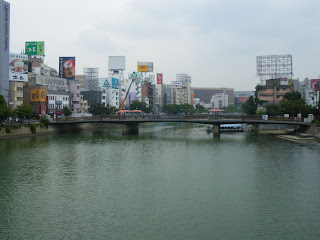 I'd like to go there sometime at night to see what it looks like when all those signs are lit up. Must be quite the site.
Posted by Sean at 10:58 PM No comments: 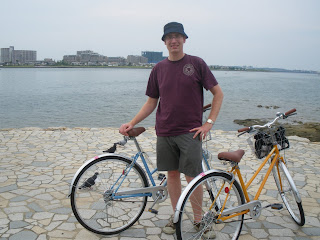 We got ourselves a nice pair of matching granny-bikes complete with fenders and baskets. This is me with them at the shore near our apartment. 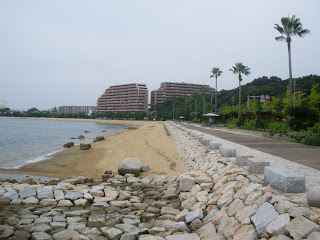 The other picture is another view of the same beach. Nice and sandy with palm trees and the whole nine yards. Now that we've got the bikes we can explore a lot better. Japan in general is about a million times more bicycle friendly than Canada. For one thing pretty much all the roads are flat as opposed to hilly. Another thing is that everything is fairly compact due to the high population density and you don't have to travel long distances to get around.

Best of all though is that unlike Canada in Japan you are allowed to ride your bicycle on the sidewalk instead of being forced to risk life and limb battling it out with cars and trucks on the street. This may seem unfair to pedestrians, but in big cities they build wider sidewalks so there is room for cyclists and pedestrians to use them without running into each other.

Of course in the countryside they don't have sidewalks so there are some limitations, but you can generally get by there because the vehicular traffic is a lot lighter.

At any rate where we are there are plenty of wide sidewalks so we are having a good time peddling around and exploring the neighborhood.
Posted by Sean at 1:19 AM 1 comment:

Email ThisBlogThis!Share to TwitterShare to FacebookShare to Pinterest
Labels: Fukuoka by Bicycle 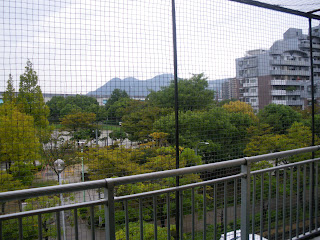 This is a picture I took from our balcony at the Dorm, I think its pretty nice. For some reason all the rooms have this netting over them, I'm not sure if that is to keep stuff in or out.

Funny story. Last night we found a spider in our bedroom. Being the humane person I am instead of squishing it I tried to catch it with my hands and put it out the window. The thing was fast and uncooperative and I ended up chasing it around the room for a couple of minutes trying to coax it onto my hand or onto a piece of paper that I grabbed. Every time I did the thing jumped away and eventually I just gave up.

This morning Ena and I went to the Orientation session for the Dorm, where all the rules were explained to everyone and a number of announcements were made. The very first announcement they made, complete with a slideshow picture of a nasty spider, was:

"Earlier this year a large infestation of venomous spiders was found on the grounds. A bite from these spiders may result in complete paralysis or death so if you see one do not touch it and contact the authorities immediately."

I don't think the spider I tried to catch with my bare hands was one of the venomous ones, but I had to laugh anyway.

Anyway, the Dorm is a lot nicer than I thought it would be. We've gotten nicely settled in.
Posted by Sean at 12:58 AM 1 comment:

I got to Fukuoka the day before yesterday after a 20 hour trip via Vancouver and Seoul.

The next day Ena arrived via the night bus from Takamatsu and we started looking around our new neighborhood. It is a really fantastic place. Just across the street from our place, about a 3 minute walk from our front door is this really fantastic sandy beach:

We walked along there in the morning and then went to the nearest 100 yen shop (Japan's dollar store only they have way better stuff than most Canadian dollar stores) and bought a ton of stuff for the new apartment.

We are going to buy a digital camera and then I'll get some pictures up!
Posted by Sean at 4:34 PM No comments: