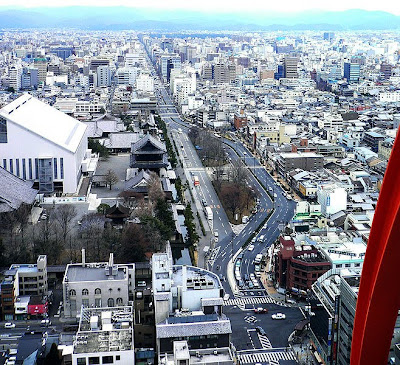 Well, actually, I like Kyoto, but I also have a lot of antipathy towards it. I've been to that city about 8 or 9 times. Its got a lot going for it - loads of beautiful cultural sights and other things.

Just a few weeks ago I was offering the city faint praise on here. As usual, every time I start to display fond feelings for it, the city unveils a whole new reason for me to have mixed feelings about it.

This time its because they are going to tear up a nice park (well, a large part of the park anyway) and build a giant aquarium on the spot. You can read about it (well, more accurate to say that you can read criticisms about it) here and here.

Mainly this makes me upset because I hate to see green space getting torn up on principle. More than that though I don't like to see it torn up for something that really doesn't make much sense.

To recap, a landlocked city which has no maritime connection but a unique wealth of UNESCO world heritage sites is going to rip up some of its rare urban greenery to build a place to see fish in the expectation that it will cause tourists to flock to the city.

Never mind that the neighboring city of Osaka - which actually sits on the sea - already has a huge aquarium. Never mind the fact that this will include a dolphin tank (re: "The Cove"). Never mind that public resources could be much more effectively used promoting the city's natural and historical attractions. Never mind that.....oh never mind. It just seems like a bad idea, enough said.

One thing to note is that Kyoto is following what seems to be a time-honored tradition of ill-advised one-ups-manship among cities here. The rule seems to be that whenever city A builds something really big and flashy, cities B through Z have to follow suit and build their own versions of whatever it was that city A built.

Theme parks are one example. After Tokyo Disneyland opened in 1983, a large number of localities in Japan followed suit with a theme park of their own. This process accelerated in the 1990s when theme parks were seen as a way to prop up local economies. While Tokyo Disneyland was and continues to be a massive success, the vast majority of the copy-cats (with exceptions like USJ in Osaka) have been horrendous failures, as I've noted here before. Fukuoka has a couple of these like Kashi kaen and Uminonakamichi, parks with ridiculously bad rides that somehow defy economic logic by remaining in business despite being completely deserted most of the time: 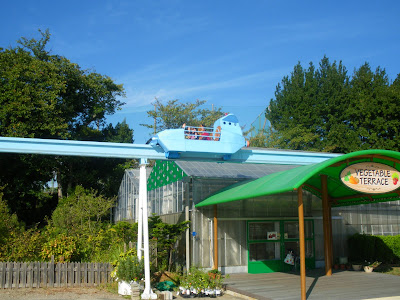 Another example is that most major cities in Japan have at least one giant ferris wheel. Fukuoka does most cities better by having two of them, built right next to each other: 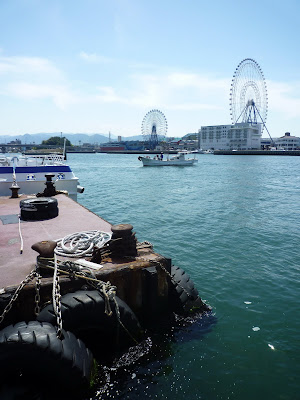 At one point in their recent histories several major Japanese cities briefly boasted hosting a record-setting ferris wheel for however long it took for another city to build one slightly bigger.

The problem of course is that once a bigger one gets built elsewhere the ferris wheel that used to be biggest becomes obsolete and economically hopeless. The big ferris wheel in the above photo is now permanently closed and awaiting dismantling.

So, anyway, Osaka has a big, successful aquarium so Kyoto has to have one too. Well, obviously this is just conjecture on my part, I have no idea what the city planners were thinking when they approved this thing (behind closed doors as opponents of the project have complained). Still, it does seem to fit the general pattern. If they were turning a parking lot or former industrial site into an aquarium I probably wouldn't complain so much. Go ahead, blow your money away. It does seem a real shame though that a bit of parkland is being diverted from the public good in such a way.

(Note: the image at the top of this post is from Wikipedia).
Posted by Sean at 7:52 PM

Can't say I've visited enough cities in Japan to compare all the various attractions but I had no idea that it was such a competition between cities. Here I thought that the giant ferris wheel that I went on in Odaiba was the only one in Japan, boy, was I wrong?!?! LOL!

It's sad to believe that they would wipe out a park for a silly aquarium...who comes up with these things??

LOL. Ferris wheels are everywhere here. To review the history:

The one in Odaiba that you visited was the tallest in the world when it opened in 1999. The previous record holder had been the one in Osaka (opened 1997), which in turn had beaten out the one in Yokohama (opened 1989).

Since the London Eye opened in 2000 the world record holders have all been outside of Japan, but the construction of new Japan-record holders has continued apace with another one in Tokyo (2001) and Fukuoka (the one in the photo above, opened in 2002 and permanently shut down last year).


And those are just the big ones. Fukuoka alone has at least 4 ferris wheels if you count the smaller ones at amusement parks.