Putting Stickers on Bikes and the Chiba Lotte Marine's Bus 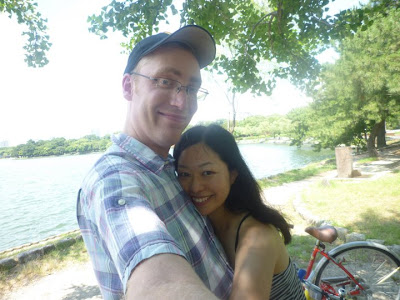 The rainy season has finally finished and we had our first weekend with some sunny weather so the two of us headed downtown yesterday sans dog. 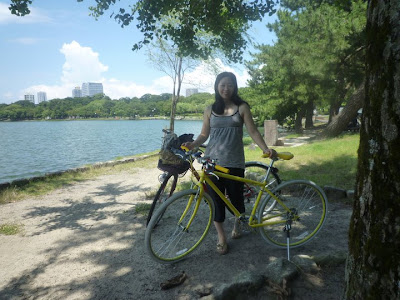 Ena suggested inaugurating my new bike with some stickers. So we went to the loft and I chose a sheet of 1970s style Marvel Super Hero faces: 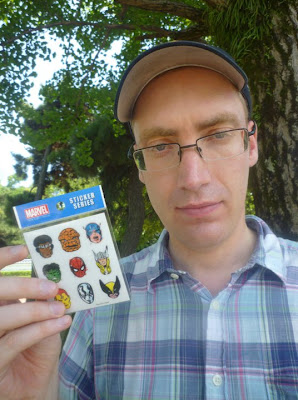 And Ena got some penguins for hers: 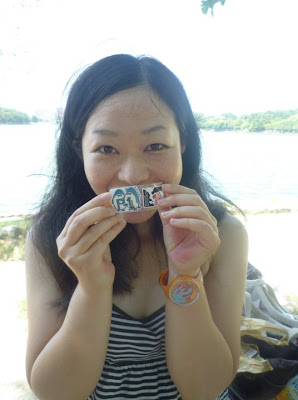 I put Iron Man on mine: 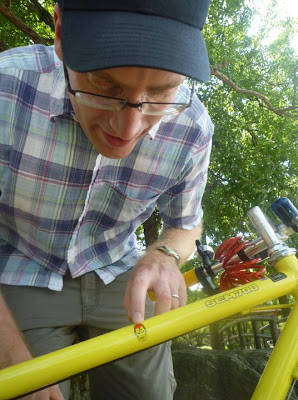 and Ena put the penguins on hers: 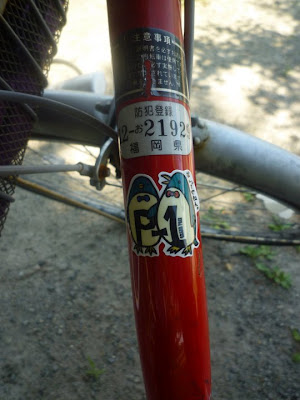 I got a whole bunch of points on my card at Bic Camera when I bought my new bike, so we stopped there so I could splurge on some more bike swag: 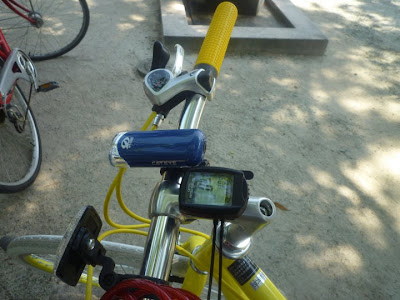 My bike now has its own computer with speedometer, odometer, clock, and a whole bunch of other stuff.

We went for a pretty nice, though hot, bike ride out to Marinoa and back. On the return trip we rode past the Fukuoka Dome, where a game had just ended. The visiting team (Chiba Lotte Marines) were just leaving the stadium via their team bus as we rode by. 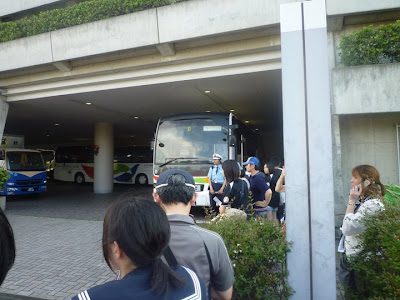 We noticed the crowd of fans swarming around and joined them for a few minutes: 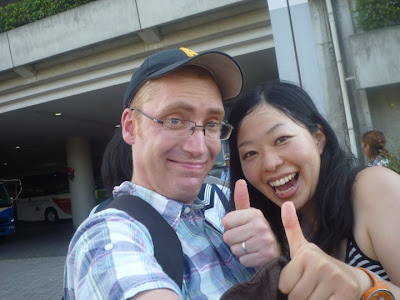 Watching people slowly get on a bus one by one isn't a particularly entertaining activity so we only hung around for a couple of minutes.

We stopped for dinner on the way back at an outdoor patio along the river in Nakasu. 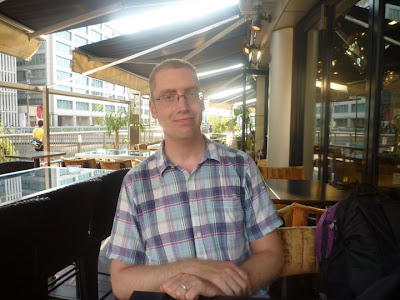 Its the perfect place to rest after a long hot summer's day: 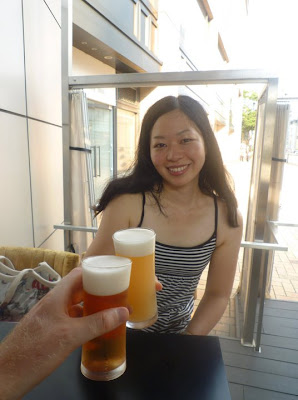 Got M'self a New Bicycle Today. 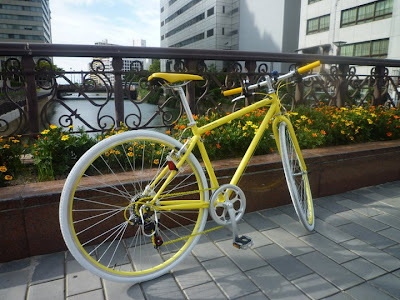 If seven time Tour de France champion and suspected dope fiend Lance Armstrong were to come up to me one day and ask:

"Sean, tell me about your new bike. Describe it for me in three words or less."

I would say to him:

"Well, Lance, thanks for asking. The three words that would best describe it are: very, very yellow.''

And that would probably be the end of the conversation. 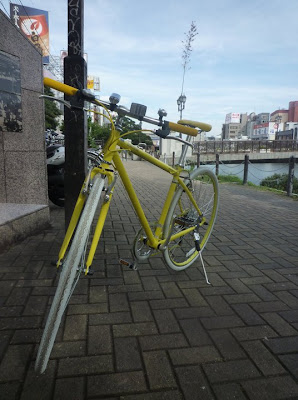 I didn't intend to buy a new bicycle when I woke this morning. I was supposed to spend this sunny day entirely in my study room looking at a computer screen.

Thankfully on my way in my old bicycle suddenly broke down. A spoke on the back wheel snapped, making a huge bang. The wheel started to wobble after that and the thing became un-rideable. This is the third time that bike has suffered a broken spoke for no apparent reason.

I took it to the nearest repair shop and they said it'll take them 2-3 weeks to fix it, which is what it usually takes them.

After leaving it there and pondering 2-3 weeks without wheels for a second, I decided it was time to get a new bike.

I've noticed that in Higashi Ku everyone rides really boring bikes. Functional and colorless. We are not a stylish people, us Higashi Ku-ians.

Go downtown though and it is wall to wall hep cats riding much cooler looking bikes. Sleek, colorful and smoove. I've always wanted one of them stylish bikes the city folk downtown ride. So I decided to get on the train and go around to some of the hep cat bike shops in Tenjin to see what they had. 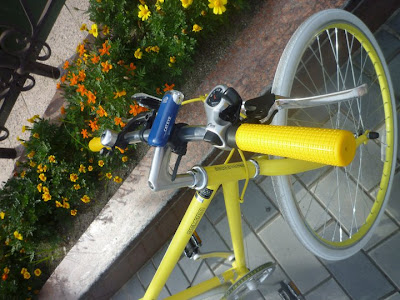 The seat is very very yellow: 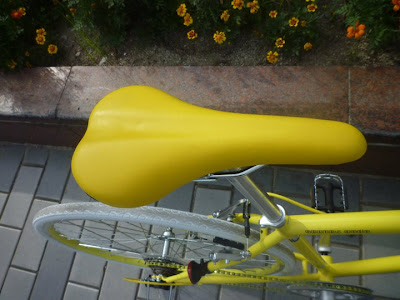 Even the chain is very very yellow: 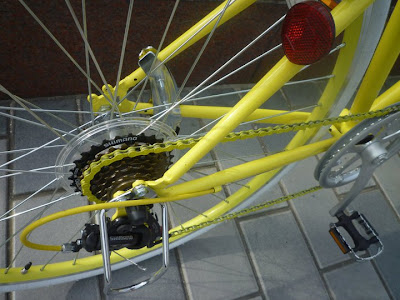 It provides a refreshing contrast with my shoes, which are very very blue: 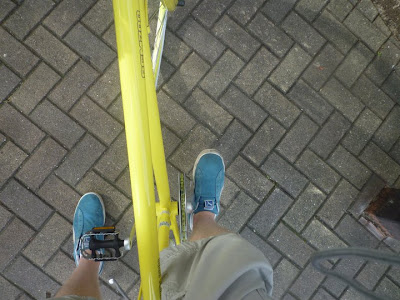 And if you ride it on those yellow bits of the sidewalk for blind people, it becomes completely camouflaged when viewed from above. Very useful if you are being chased by a helicopter: 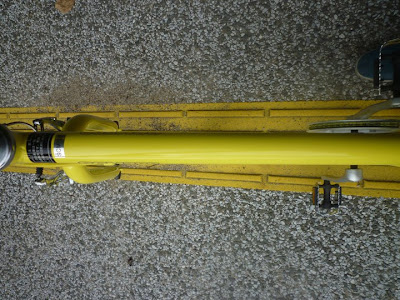 This thing is the complete opposite of my old bike, which is all black and gray. On the down side my new very very yellow bike doesn't have a basket or fenders, so it can't completely replace the old one, which will still be doing shopping duties. This one weighs about half as much and I can go much much faster on it than can possibly be safe for me, so I'll just use it for high speed chases and that sort of thing.
Posted by Sean at 1:52 AM 4 comments: