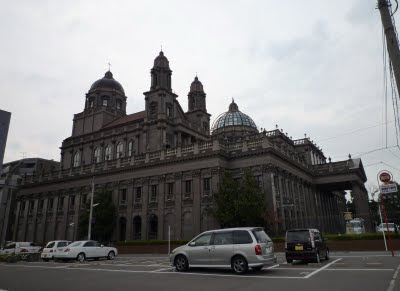 If I had to chose my favorite thing about Japan, it would be the wedding churches. Hands down.

At some point - I don't know when - Western style weddings became popular here. It is easy to see how this trend would be faced with a bit of a bottle neck in a country where less than 1% of the population is Christian - not enough churches. Can't have a Western style wedding without a church.

There are some actual functioning churches here run by actual followers of the religion, but for the most part these are housed in some of the ugliest post-war architecture imaginable. What this country needed was more gorgeous stuff.

Enter the Japanese wedding hall industry, the world's leading provider of solutions to your 'not-gorgeous-enough' problems. 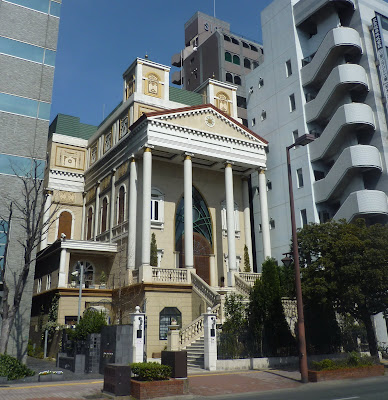 It would be an exaggeration to say that the country is now awash with mini Gothic and Baroque cathedrals, each built of sturdy concrete, plastic and steel and set in the lush surroundings of a sea of asphalt: 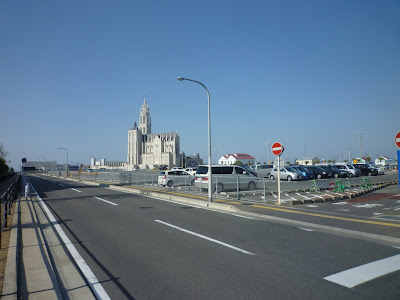 But only slightly so. Pretty much every city with a population large enough to support one has a steeple or two punctuating its skyline. Fukuoka has several, including all of the ones in the photos here.

I'm not a religious person, though I've heard mumblings of disapproval about this sort of thing from Christian acquaintances who are. Having gone to a Catholic school as a child, I do have some inkling that this is the type of stuff that their god does not generally have a sense of humor about. If memory serves, he (or she) is very jealous about the use of his (or her) trademarks for purposes other than acknowledging how great he (or she) is. Kind of like Disney.

Anyway, I take no position on the theological debate about these things (if such a debate exists). I just rather enjoy the fact that they are here. I attended a wedding at one once. All I can say is that I am pleased that my own wedding (organized by my fantastic family under the supervision of my wonderful Mom - thanks, mom!) was held in a more modest setting. This isn't so much a comment on the structures themselves, but more on the heavily choreographed nature of the ceremony and reception that the industry puts on. This, of course, is in no way limited to Japan but is a symptom of the wedding industry in most wealthy countries and is more a question of personal taste. Some like them, I don't.

But I'm getting off topic here. 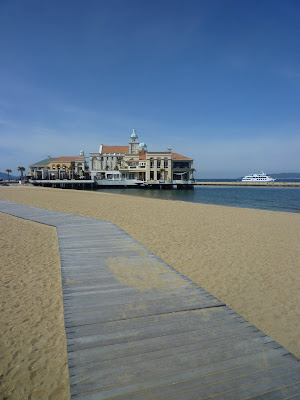 As I said, these things are great as pieces of the urban landscape. In terms of outlandishness they are only rivaled by pachinko parlors.

I am constantly forced to wonder if these things aren't the result of some brilliant piece of absurdist performance art gone horribly wrong. I imagine that thirty years ago two young wedding planners with easy access to no-questions-asked financing and a wry sense of humor were getting drunk while watching Charles and Di's ceremony when one of them just blurted out "Eureka!" The rest is history. 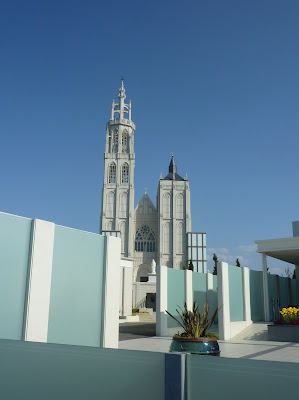 You know, the buildings themselves don't look too bad. Seeing them in context, though, they look quite ridiculous! Do the insides look traditionally church-like, too?

Yeah, I think they are the sort of thing that fall into that "so bad they are kind of good" area.

I've only ever been inside one (not pictured in this post) and the insides looked more like those of a fancy hotel than a church. As it is just for weddings all of the religious stuff (pictures of Jesus, etc) isn't in there so it feels more like you are in a dressed-up conference centre or something.