Fukuoka Airport and Shime Coal Mine: An Odd Combination, But That is Where I Went Today 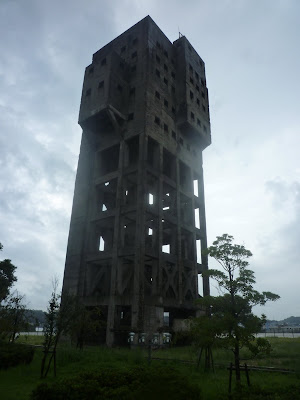 I had to bike out to Fukuoka Airport today to renew my visa. I don't really like heading to the airport because its a really unpleasant ride mostly through an industrial area. The only interesting thing brightening the journey is the tasteful artwork to be found in a Pachinko Parlour parking lot: 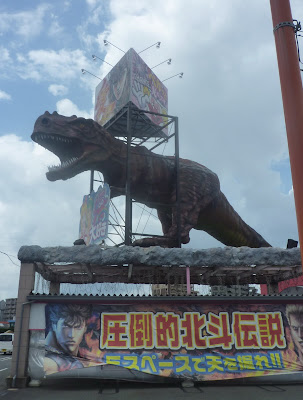 I actually like Fukuoka airport. Its close to downtown, easily accessible by subway (less than 10 minutes to the heart of the city) and....well other than that its just a normal airport. Which is fine.

Up until about a year ago the newest public works boondoggle-in-the-making was an entirely new Fukuoka airport to be built on an artificially constructed island at an estimated cost of 920 billion yen (about 9 billion US dollars). Thankfully the governor said "no", which made me quite happy. These artificial island airports are such a waste of money and resources. Where we used to live in the Kansai area what can only be called idiotic decision making (particularly by the Kobe city government) led to two of these monstrosities (KIX and Kobe) being built right next to each other even though there was already an airport (Itami) servicing the region. The struggles of these new airports have been news fodder for some time now. Both Osaka and Kobe's city governments are massively in debt and they have these airports to thank for it. Joining in on the idiotic, unnecessary airport building boom was rural Ibaraki, which just opened its own finance-destroying airport much to the amusement of the mass media in March.

Anyway, enough about that. The one thing I find amusing about Fukouka's airport actually isn't in the airport itself, its what is across the street when you leave the front door: 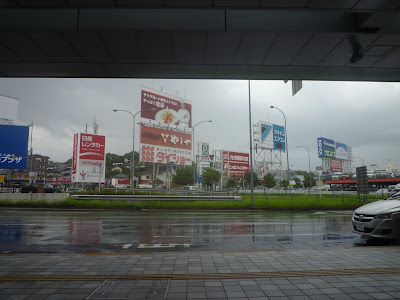 These things are visible from miles away at night, when we take a bus out of town on the return trip I always look for these signs because they are the only Fukuoka landmark visible from the highway (which doesn't run anywhere near them) that is instantly recognizable. If you look closely, some of these are actually built directly over people's homes.

After finishing my business at the airport I decided to head over to nearby Shime town, which is only about 20 minutes by bike away. Shime is a former coal mining town whose mines shut down a long time ago. Last December the remnants of the Shime coal mine were declared an important cultural property by the central government. This is part of a new trend to recognize and protect former industrial sites for posterity's sake, NHK even did a show about it (not just about Shime, but the mine was included in one segment). I just had to go check it out for myself.

The road from the airport to Shime, I have to say, is not an attractive one. Especially on a rainy day, this guy provided the only color: 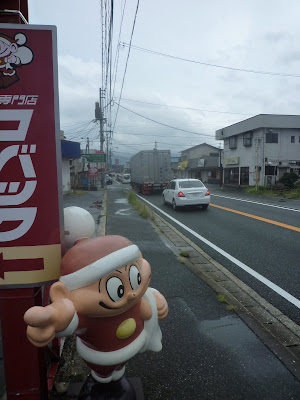 Anyway, after a few minutes of pedaling I arrived at Shime. Finding the coal mine wasn't hard as the shaft tower looms over the entire town and is easily visible in the distance: 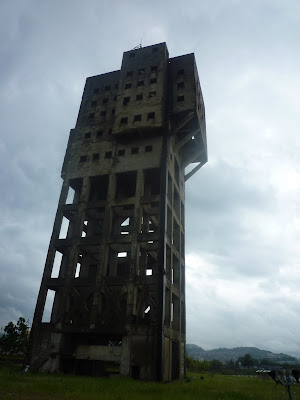 The Shime mine began operations in the late 19th century, though the above structure (which is really all that is left above ground) was built during the war when the mine was used to supply coal to the Japanese Navy. It is a well-documented fact that a lot of coal mines in Fukuoka employed Allied POWs during the war in some really atrocious conditions. None of the signs which gave the building's history gave any hint of whether that was the case at Shime mine as well, though the time of its construction (1943) and its use by the Navy make me suspect it may have been.

At any rate, I have to admit that the building has an odd charm about it. Something about its odd shape, it looks different from different angles: 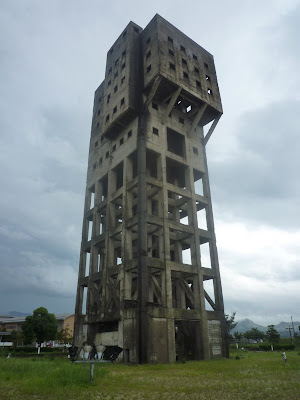 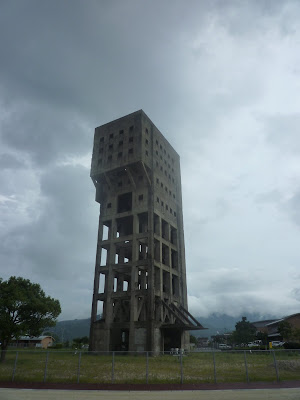 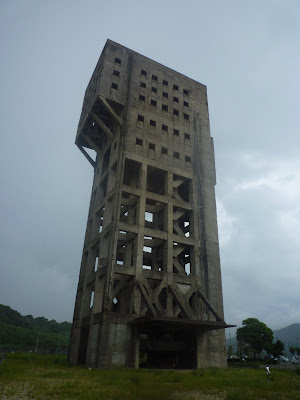 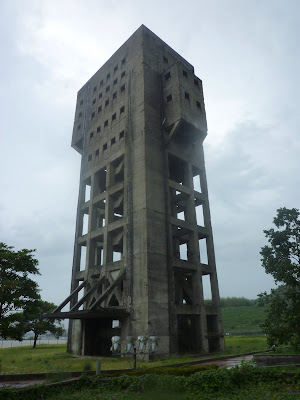 The mine was closed in 1964 and the structure sat abandoned until recently people became interested in preserving it as a form of cultural property. As you can see the concrete is in pretty rough shape: 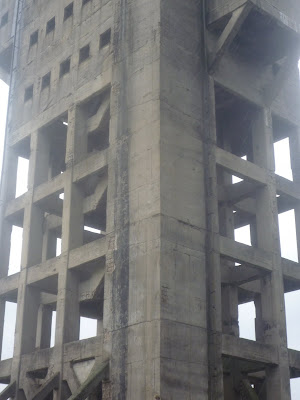 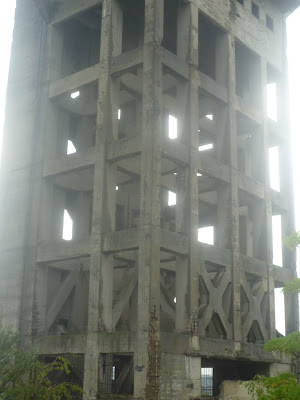 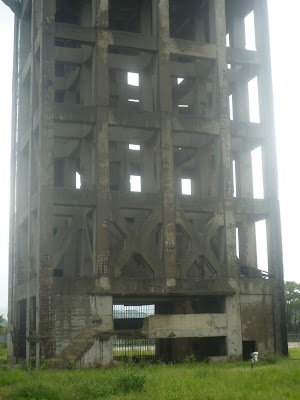 While I found the building itself to be fairly interesting, the overall experience of going there was a bit of a let-down. While the structure itself has been barred up since it was closed, up until some time in the recent past it had been possible to walk right up to the building. There is a landscaped path that leads right next to it. Unfortunately they recently surrounded the thing with a tall chain-link fence that prevents anyone from getting within about 50 metres of it. The fence cuts across the path that used to lead right up to it: 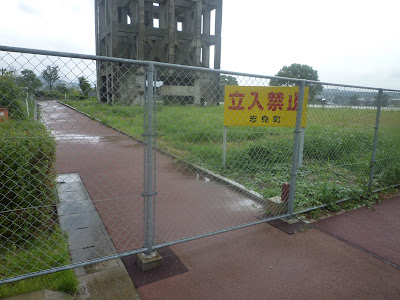 There wasn't anyone around and I couldn't find out why they had done this, the signs just say "Entry prohibited". There may have been some valid safety concerns involved here, but closing it off like this really takes a lot out of the experience.

Actually the surrounding area isn't particularly nice either. They've built a giant public recreation hall right next to it and a park that has a few useless structures that do nothing to protect passing bloggers from the rain as I discovered during a sudden downpour while I was there: 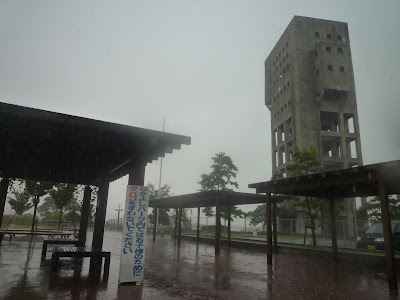 Fencing things off, building parks and recreation halls is OK, but.....I think what needs pointing out is that - basically - this mine shaft is an ugly, ugly piece of concrete shit. The only thing that makes it interesting is its kind of brooding, derelict-looking state that can really make people's imaginations work. If you fence it off and surround it with the same sterile old shlocky municipal park-type crap with a big ugly recreation centre and huge parking lot right next to it, then you rob it of even that. I'm certainly not saying they should have just left it to rot, but there must have been a better way to do this.

Hmmm...on second thought maybe they should have left it to rot. Beautiful neighborhoods lined with lovely old wooden machiya getting bulldozed across the country and THIS is what they decide to invest money in protecting as important cultural property? Ah, screw it, I'll never understand this country.

Anyway, with the help of a cropping function I can still capture some of its brooding dereliction: 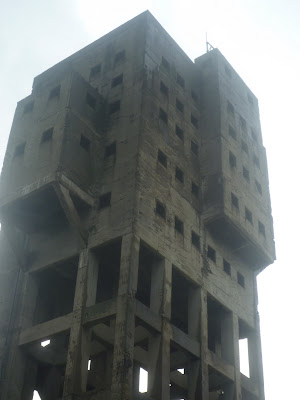 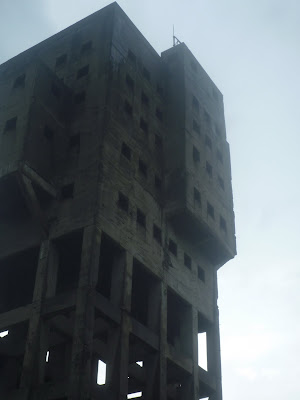 The entrance to the mine itself is nearby, also fenced off: 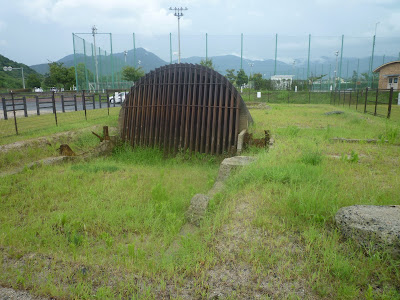 The town of Shime, once you get off the awful main road, isn't too bad. They seem to have had a lot of red bricks brought in at some time as some of the side streets are full of lovely walls made of them: 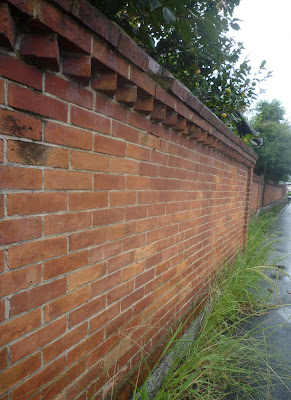 The tower looms over them: 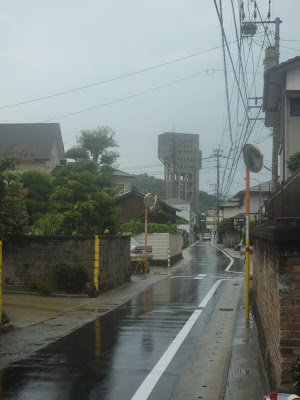 In the first few months since I put this post up it got a little over a 100 pageviews total. Then one day last week it suddenly got almost 2,000 in a single day.

Enter the Anti-Zombie Fortress meme. Apparently somebody noticed that the Shime coal mine would make a perfect anti-zombie fortress and the whole internet took notice of this bizarre fact and everyone suddenly wanted to know everything they could about the previously-obscure Shime coal mine. This post of mine and this one at Abandoned Kansai seem to be the only English blog entries out there detailing the mine, hence the surge of traffic.

Anyway, anyone out there looking to play with the Anti-Zombie fortress thing, I hereby give you permission and encourage you to use the photos on this post for whatever creative zombie related endeavours you may have, assuming this thing hasn't completely played itself out yet, which it might well have.
Posted by Sean at 1:03 AM

Hey! Those same signs were there in 1978. They are landmarks! There are ammunition bunkers behind them in that hill.

The "Keep out" signs? That seems odd. They seem to have recently (definitely after 1978 judging by the looks of it) landscaped around the thing, but its been fenced off. Perhaps I'm just confusing the chronology, they may have landscaped around the fence and are preparing to take it down so the public can get closer or something.

Sorry Sean, I meant the airport billboards and not the Zombie fort! i lovethae zombie thing. Its so perfect.

Wow, I'm going back to Akita in Summer but maybe I'll book a flight to Fukuoka too just to see this tower... you know... to know where to go in case of a zombie apocalypse :-P