It was a nice, warm Sunday today so Ena and I decided to ride our bikes to Meinohama in the west end of Fukuoka and take the ferry over to spend a day on Nokonoshima island.

Nokonoshima is an island in Hakata bay known for its nice beaches and pretty flowers. It is only about a 10 minute ferry ride (though it takes over an hour to get to the Ferry terminal on bikes from our place). I'm not sure why we've never made the trip over before.

We arrived at the Ferry terminal just in time to see the doors closing on the 12:15 ferry, meaning we had sped all the way for nothing. The next ferry was an hour later so we got lunch while we were waiting. 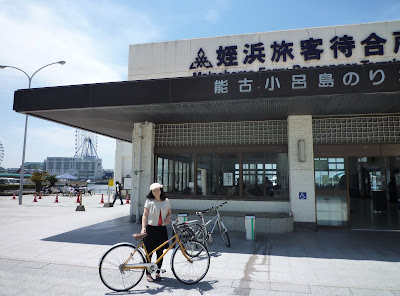 Eventually we got on the ferry and were on our way, which made Ena happy: 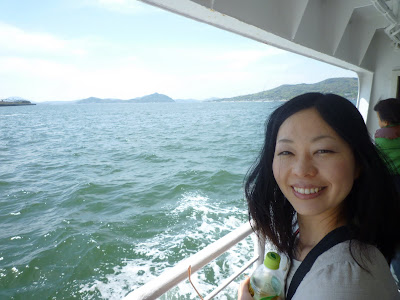 And the city faded into the distance behind us: 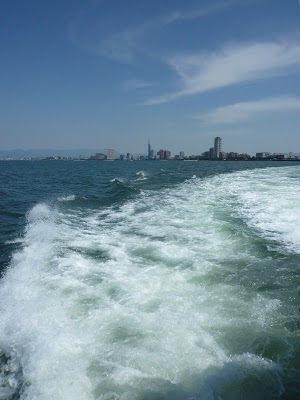 Which also made Ena happy: 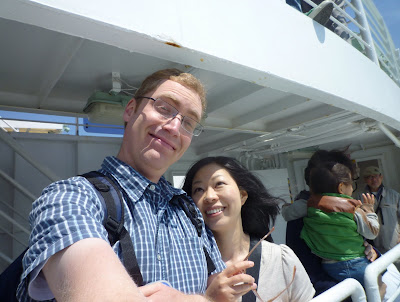 And Nokonoshima came into view ahead of us: 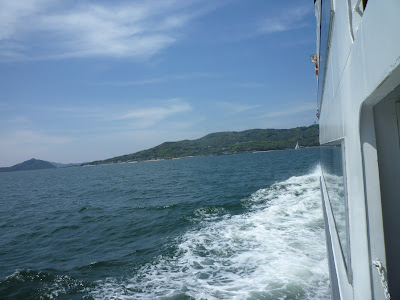 Which, again, made Ena happy: 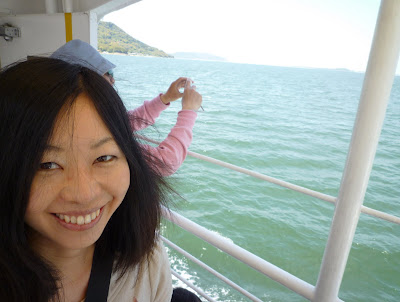 The door opened on the front of the Ferry and we rode our bikes off: 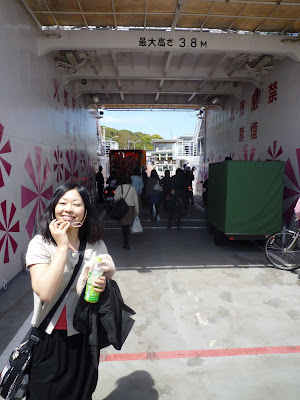 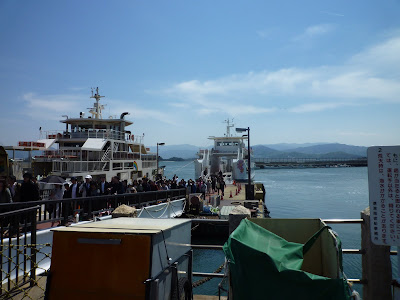 Nokonoshima is a mountainous island with only a few hundred residents. It has one big attraction, which is "Island Park", a big garden on the far side of the island from the ferry terminal. Most of the walk-off passengers made a bee-line for the bus stop that heads to the park. We decided to head away from the crowd and avoid the park, which wasn't too hard.

We followed a road along the coast, which eventually went uphill quite a bit. There were some great views of the sea and neighboring islands, like Shikanoshima visible in the distance here: 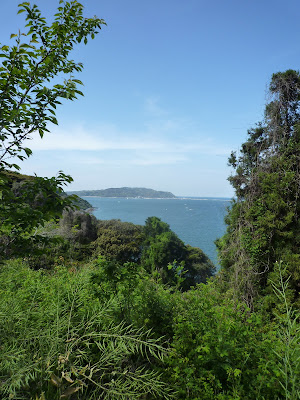 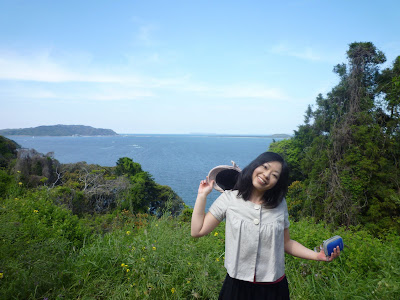 We found a novel way of taking a self portrait: 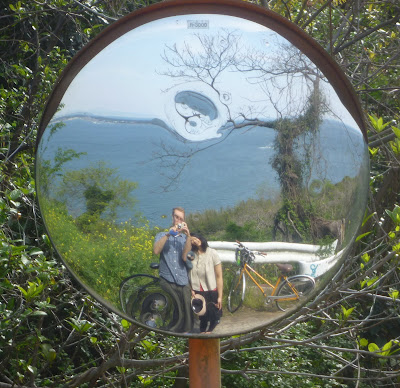 In addition to tourism in the summer, the island's other main industry is oranges. The road took us through a lot of orange tree groves: 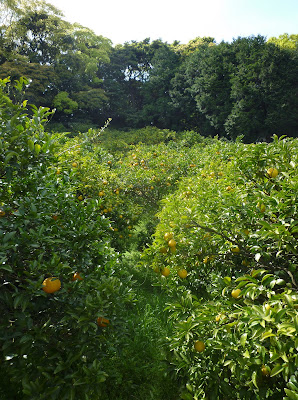 And past some pretty farms: 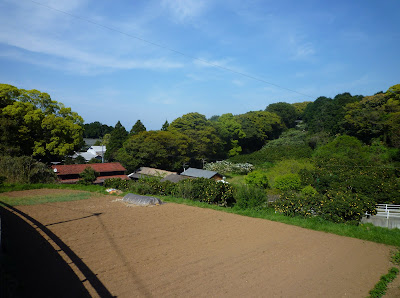 Eventually we cycled all the way to the highest point on the island (195 metres high). There was a small viewing platform at the top which we climbed up and got to take advantage of the 360 panorama of Hakata Bay. Looking towards Genkai shima (the island on the right): 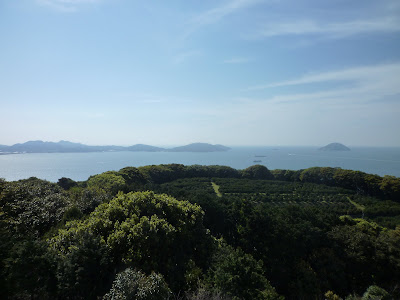 And the Ito Peninsula: 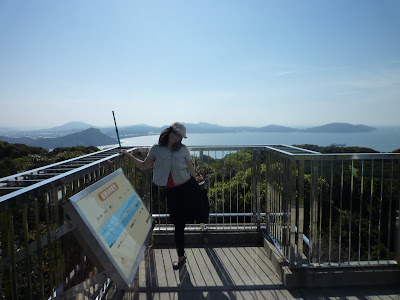 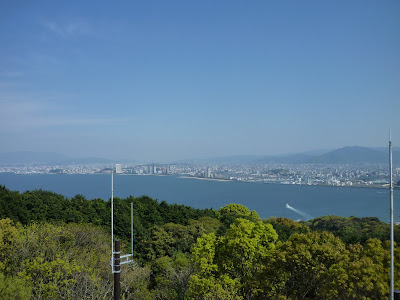 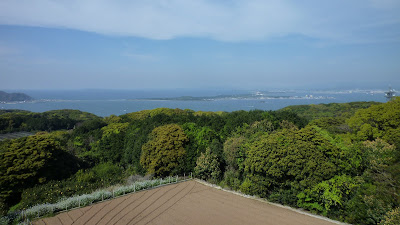 After that we rode down an extremely steep road all the way back to the island's main town. Ena's brakes squealed the whole way down!

Back in town we stopped at a little cafe where Ena had some cocoa and I had a bottle of "Nokonoshima cider" and a cookie: 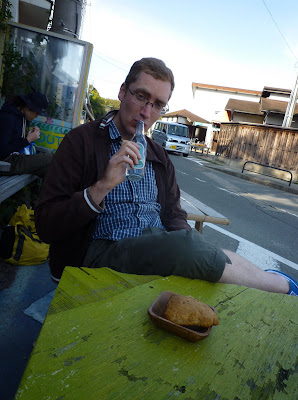 And then back to the ferries: 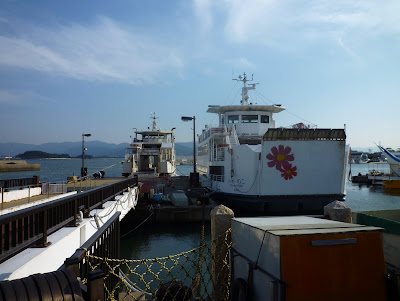 And we said goodbye to Nokonoshima: 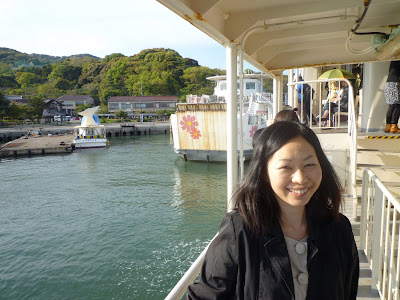 It was a really great time. We plan on going back to stay overnight at this place that rents cabins along the beach sometime in the summer.
Posted by Sean at 5:02 AM

Email ThisBlogThis!Share to TwitterShare to FacebookShare to Pinterest
Labels: Fukuoka by Bicycle, Nokonoshima