My birthday, KitaKyushu and other stuff 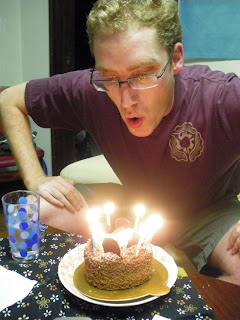 It was my birthday over the weekend. Ena got me a very nice cake:

We also went to Kitakyushu last week, which has a reconstructed castle that is built right next to a huge mega-development. It makes for an interesting panorama:

I also got myself a Famicon, which is the very first Nintendo game system. We were in a second hand store and I saw it on the shelf, complete in its original box, for only 1250 yen (about $12 Canadian) so I thought "Ah what the hell, even if it doesn't work I won't be out much money". 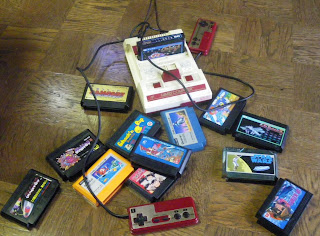 It took me a few hours to get it to work, there were some broken bits and it was really dirty, but nothing too serious. It was kind of a fun project. There are a couple of huge stores near the campus that sell mostly used toys. They both have thousands of Famicon games that mostly sell for about 100 to 300 yen ($1 to $3 Canadian). I've taken to dropping in on the way home from school once a week or so to rummage through the piles looking for good ones.
Posted by Sean at 11:47 PM