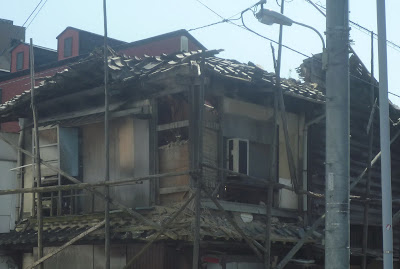 When I ride my bike downtown I take a route that passes by the Fukuoka prefectural government’s capital building. It is a utilitarian, ugly grey edifice that isn’t worth photographing in its own right (hence the lack of photos here) but it does have the benefit of an avenue lined with lovely, mature camphor trees running in front of it which makes for a much more pleasant cycling experience than the smog-filled, treeless abomination that is route 3.

On passing the government buildings, the scenery abruptly changes. The interest of city planners in beautifying the area only seems to have extended as far as the line of site from the governor’s office reached. At that point we return to the usual indifferently laid out roadway that characterizes most of Fukuoka’s (and indeed any Japanese city’s) city-scape. Mature camphor trees turn to stunted, miserable looking deciduous trees whose limbs are regularly stripped of all greenery by city workers and the wide, tiled sidewalk turns narrow and bumpy.

At this point we have entered the strange nether land in the urban fabric of Fukuoka that is Chiyomachi Ni-chome.

Chiyomachi Ni-Chome (for the sake of brevity, “Chiyomachi”, though in actual fact I’m mainly talking about only the Ni-chome part of Chiyomachi) is perhaps one of the most miserable looking neighborhoods in Fukuoka. It exhibits layer upon layer of Japanese architectural and city-planning history that coalesce into an economically unviable, depressingly ugly mess of a neighborhood whose existence is pretty much ignored by everyone. In light of my recent fascination with the crumbling, desolate side of Japan as exhibited on this blog (like here and here) I just had to explore the area with my camera.

When one approaches Chiyomachi on just about any side on one of the several main roads that surround and bisect it, the buildings facing the street are the usual assortment of ghastly apartment buildings that developers have inflicted on every corner of the archipelago in recent years: 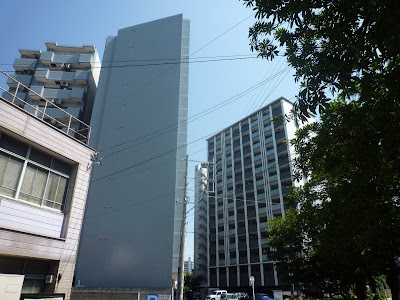 These buildings form a kind of wall facing out onto the main roads. One could pass through Chiyomachi on those roads and think the neighborhood was nothing but giant ugly apartment blocks. But hidden behind these apartment blocks on the back streets are the remnants of the townhouses and shoutengai of old Chiyomachi.

Proceeding down the road from the government buildings one gets a rare peak at this old world in an odd building whose façade is barely visible in a break between the high-rise edifices of the modern apartment and office buildings. It is a building that I’m sure everyone who has ever ridden a bike down this road will instantly recognize as it is the sort of thing that you can’t miss noticing. Those who zip by in cars probably won’t as it would go by in a flash. How the building is still standing is a mystery: 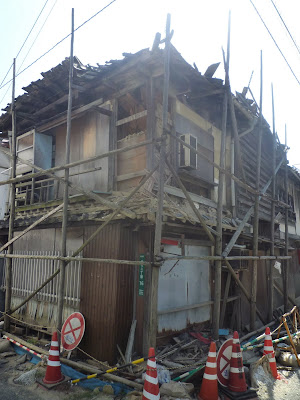 The sight of this place is what first interested me in Chiyomachi. I’ve been watching it slowly crumbling bit by bit every week for the longest time. The roof finally caved in a few weeks ago and I thought I had better take some pictures of it quickly before it completely falls apart: 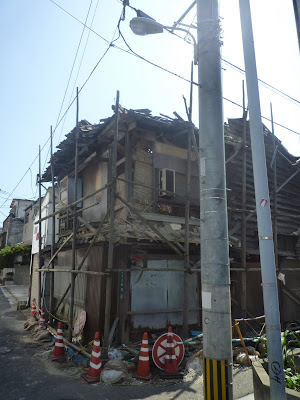 I really have no idea why this thing has been allowed to slowly collapse in on itself for this long. In the countryside it isn’t unusual to find abandoned buildings slowly deteriorating, but this is in the middle of the city. The street is partially blocked by debris that has fallen off, with red pylons marking off the danger area: 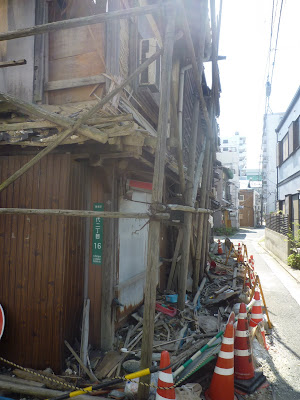 Even the scaffolding erected to hold it up looks ancient and like it might fall over with the building: 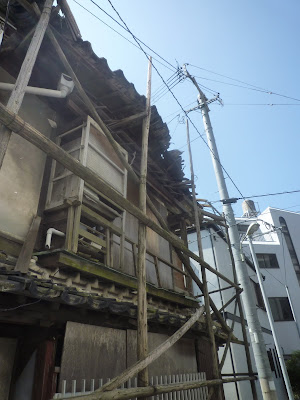 This is actually pretty much the typical fate of old townhouses like this, albeit most get pulled down before they reach this level of deterioration. Even in the midst of its decay and the patchwork of add-ons like the sheet metal siding you can see that in its prime it must have been quite an attractive wood building owned by some merchant or artisan in the old town. Chiyomachi was once dominated by buildings like this, as is evidenced by old pictures of the area, but they are a dying breed.

Actually, wood townhouses (“machiya”) like these have had a really hard time in Japan in recent decades. Up until about 40 years ago Kyoto – the cultural and traditional capital of Japan - had city streets which were lined by lovely rows of such machiya, giving the city a charming, traditional feel. Or at least so I’m told. By the time I made my first trip to Kyoto in 1999 most of those had been torn down and replaced by a generation of architecture that strictly followed the aesthetic demands of the “brutalist ugly plastic and concrete shit” school. A stake had been driven through the old city’s heart and it has never really recovered, a fact lamented by pretty much every western writer with an artistic bent who has visited Kyoto since the 1970s. In the past decade though the trend there has thankfully reversed itself and these lovely old machiya, once considered passé, are now back in vogue and efforts to preserve those that remain are helped by the fact that they command a price premium on the real estate market. They are, after all, quite attractive when well maintained as this one in Chiyomachi attests to: 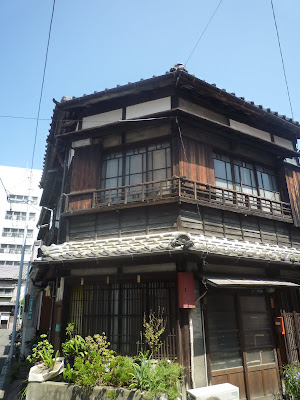 This refreshing new trend in Kyoto unfortunately hasn’t washed up on Fukuoka’s shores yet and the rule here seems to be if you want to sell a piece of property with a machiya on it you are better off demolishing the machiya first and just selling the land, as it is worth more without it than with. As a result, most of the ones left are just waiting to be torn down when their current occupants, mostly old pensioners, pass away and the land moves on to other hands.

Very few attractive machiya exist in Chiyomachi these days, of the few that remain most have had plastic, concrete or metal facades added over the years that have robbed them of their traditional, wooden charm. Nonetheless, in the back streets you can see the struggling remnants of the old neighborhood somehow still existing in the shadows of the high rises that now surround them. Strolling the streets one is confronted by the obvious fact that this neighborhood has no more energy left in it. While most of the buildings are still occupied, not a soul stirs on what once upon a time must have been a bustling shopping street. All the shops now sit shuttered on a sunny Saturday afternoon: 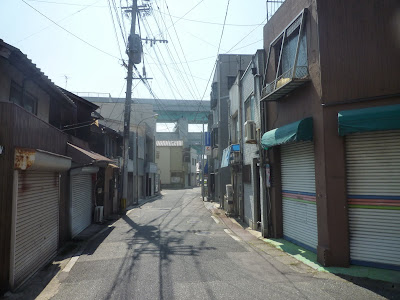 Other houses sit abandoned, though not quite as near their ultimate fate as the one above: 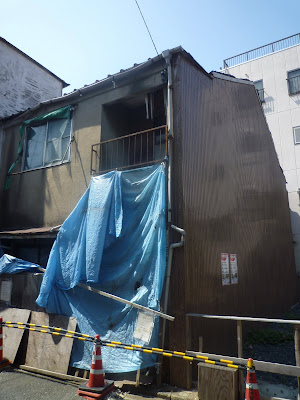 A few potted plants at least give these places some vibrancy, indicating that people actually live here and care enough to water them: 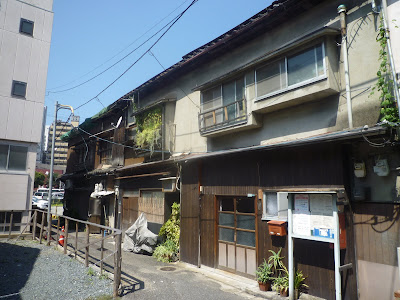 Around the corner, more boarded up shops sit empty, no more customers to darken their doorways: 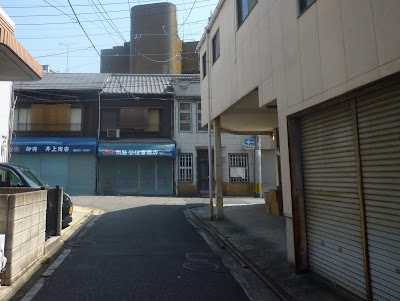 The look of decay on some corners resemble the type of thing you see in pictures of shanty towns in the less economically endowed parts of the world, though at least the places look lived in: 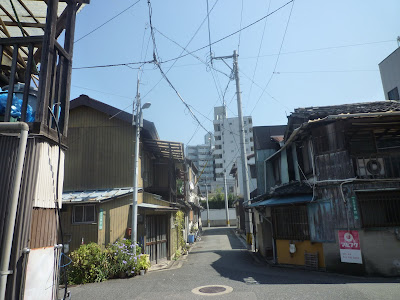 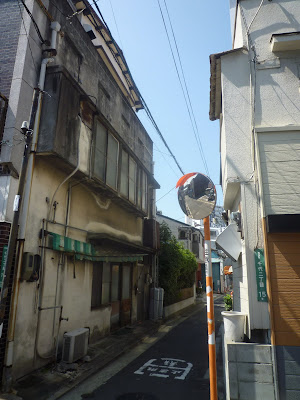 Back on the main road, one sees the bizarre results of trying to squeeze a 5 floor modern apartment building onto a parcel of land originally designed to hold a single machiya: 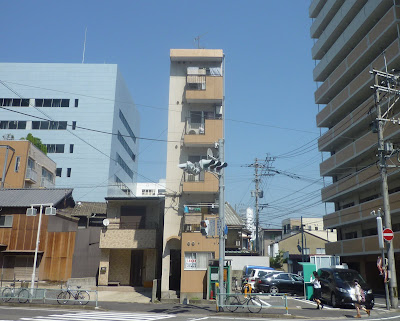 Across one of the major roads, a slightly more “alive” part of Chiyomachi boasts an interesting building still in business. This is a public bath, a dying breed in modern Japan where everyone has their own bath to use. In the old days though these were a mainstay of every neighborhood, just like barber shops and grocery stores. The door on the left leads to the women’s bath, the one on the right to the men’s. 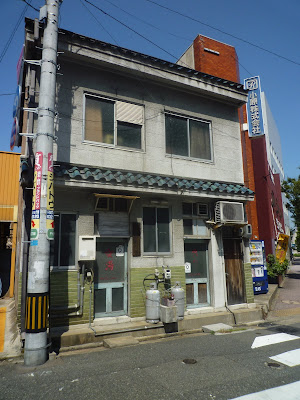 Here is another well-preserved machiya. Unfortunately they lose a lot of their charm when surrounded by asphalt, ugly high-rises and power lines as this one is: 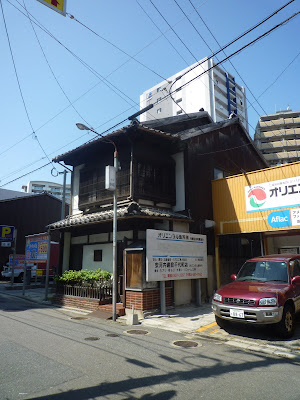 This side also boasts another struggling form of business that is dying out across the country: the old mom and pop style general store: 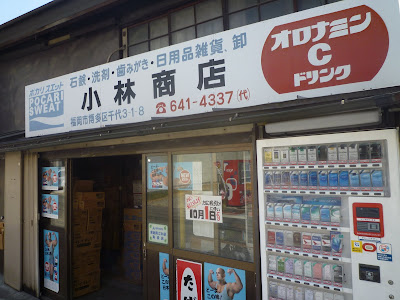 The sign says it sells “soap, cleaning goods, toothpaste and daily use goods” though one suspects that the cigarette machine provides its main source of income these days.

Another block reveals another era of Japanese urban development. Sometime in the 1970s (judging from the building style) a large part of Chiyomachi was replaced by some large scale apartment blocks. These are a bit different from the ones that front the major streets in that they take up the entire blocks on which they sit, meaning that all of the old town where these ones are was completely obliterated at the time of their construction.

The apartments are ugly and drab, but their most interesting feature are the storefronts that were built around them to front onto the sidewalks: 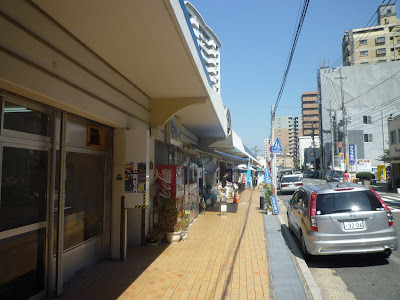 These have the look of strip malls, yet unlike most big developments these weren’t filled with big chain stores. Rather the little stores and restaurants of the old neighborhood seem to have moved in. It creates a strange contrast. The building obviously was a major undertaking which required a huge amount of financing to build. Yet the shops that occupy it are more or less the same kind of haphazardly organized places on sees in the run-down old buildings on shoutengai like those in Kashii. So you’ve got places like this vegetable shop with a mix-matched variety of tarps and empty boxes spilling out over the sidewalk and even onto the street: 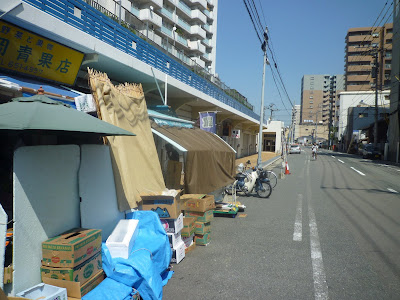 The fact that it is in a big, expensive building hasn’t really done much to prevent this shoutengai from meeting the fate of so many others around Japan and large stretches of shops are to be found shuttered: 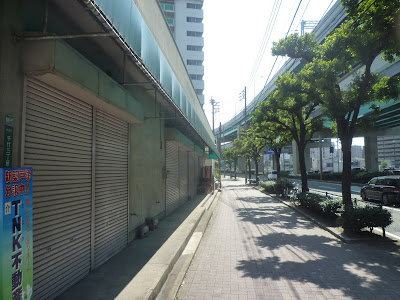 Anyway, that is Chiyomachi Ni-chome. Only a few blocks away from Hakata station – the busiest piece of real estate in Kyushu (home to 13 million people) and yet it looks like the land that time forgot. I may be the first person ever to have bothered to write about it in English. A google search turns up precious little on the neighborhood. Even a Japanese language web search doesn’t turn up much. Its Japanese Wikipedia page just gives you some of the dry facts (date of foundation, population, etc) but tells you nothing of substance about it. Most of the other Japanese sites aren’t about Chiyomachi per se but sites dedicated to other things with which Chiyomachi happened to be connected, like Fukuoka’s old streetcar line (which used to run through Chiyomachi before the subway replaced it). In a few years the remaining houses will probably be cleared away and the whole neighborhood turned into a pachinko parlor parking lot or something. Kind of sad, but what are you going to do?
Posted by Sean at 2:38 AM