A few years ago the controversial writer Alex Kerr wrote something to the effect that Japan was the ugliest country on the planet. In fact he wrote a whole book that was mostly devoted to the subject of picking apart everything wrong with Japan and a lot of that had to do with its physical appearance.

I was sort of thinking the other day that if someone who had never been to Japan read this blog they would probably think Alex Kerr was an idiot because I've put up loads of pictures of beautiful scenery, ancient temples, pretty beaches, etc and Japan looks great. I have to come clean here and admit that the photos on this blog do not necessarily present an accurate picture of what modern Japan looks like. Like most tourists I've recorded and photographed the pretty while ignoring the ugly. And while I'm not really an Alex Kerr fan, I have to admit that he isn't entirely wrong: in many ways Japan is an extraordinarily ugly country.

In order to balance out my Blog I thought I'd take a few pictures around town to demonstrate what I mean.

Part of the problem is that so little of the architectural heritage of the country has been preserved. Its an ironic fact that at the international level Japan is one of the leading countries in terms of signing and promoting conventions to protect cultural heritage yet at the same time so much of its own has been wiped out in recent years by rampant, poorly planned development. Part of the problem is that Japan is actually really good at preserving specific buildings and sites, but everything that isn't specifically designated for protection is basically left to its fate (the wrecking ball).

This results in the very unpleasant phenomenon of well-preserved historic sites being completely surrounded and overwhelmed by plastic and concrete surroundings, which inevitably ruins the beauty and ambiance.

For example, take a look at this cute little row of Meiji Era townhouses in the Tojin-Machi part of Fukuoka: 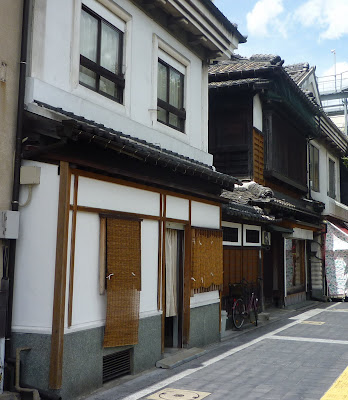 Pretty aren't they? But then when we look at a picture that hasn't been carefully cropped: 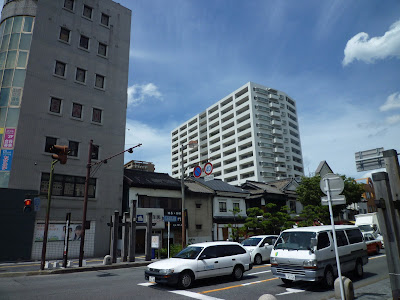 They are pretty much swallowed by the surrounding apartment blocks.

Of course a modern city with a huge population needs big apartment blocks and I don't necessarily object to the above buildings, I just put those up as an example of what I mean.

What I do object to, however, is the way the Gion district of town has been developed. Gion is an area between Hakata and Nakasu that is sort of Fukuoka's "temple district". Actually, the area I have in mind is larger than the administrative area of Gion in Fukuoka and includes parts of neighboring blocks, but for convenience sake I'll just refer to the whole area as "Gion". The area is just a few square blocks in size but has dozens of temples and shrines, some quite large and historic. It is also the home of the Gion Yamakasa festival, Fukuoka's most famous event.

Now from a city planning point of view the Gion area would have been ideal as a tourist attraction. Its got loads of interesting temples with some beautiful gardens and architecture in a compact area that would be ideal for tourists to stroll around.

But instead the neighborhood looks pretty much like every other one in town (ie boring and unattractive), only with a few temples and shrines interspersed with the usual blandness. By "blandness" I mean streets that look like this: 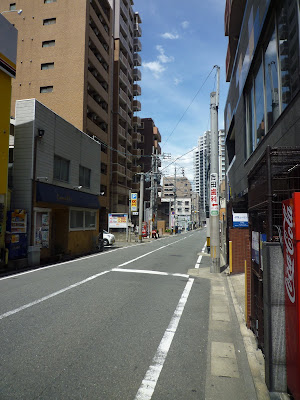 Power lines, asphalt, ugly tall buildings and not a tree or piece of traditional architecture in sight.

The temples in Gion were (mostly) well preserved but the old townhouses that once surrounded them have almost all succumbed to concrete and plastic ugliness with no zoning rules or anything to limit it. So you've got little gems like the 19th century Rokkakudo hall at Tocho-Ji that looks absolutely wonderful when photographed from the right angle: 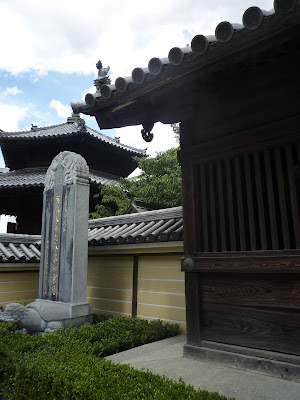 But that beauty just gets squandered when it is surrounded by the "borrowed scenery" that dominates Gion today: 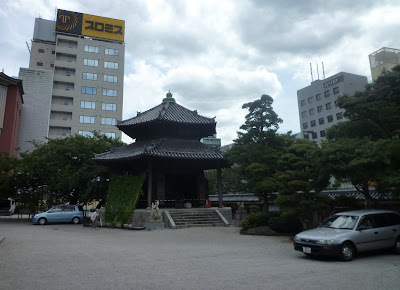 Or this temple, barely visible behind the parking lot that fronts it: 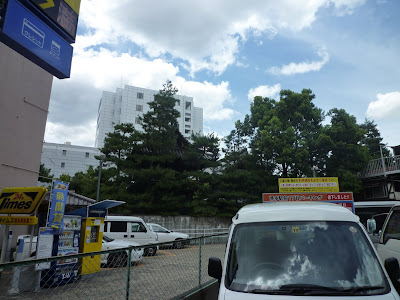 This is what the street adjacent to it looks like: 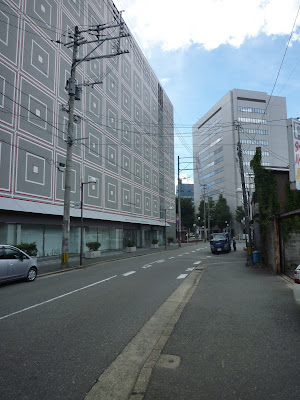 Or this temple, which suffers from the double whammy of being surrounded by urban ugliness AND being a fairly ugly edifice itself: 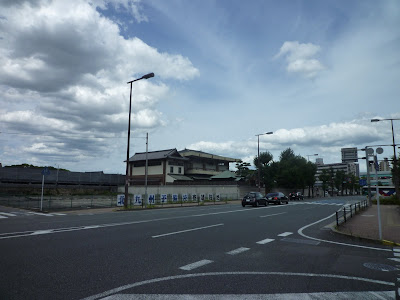 This temples is just boxed in on all sides: 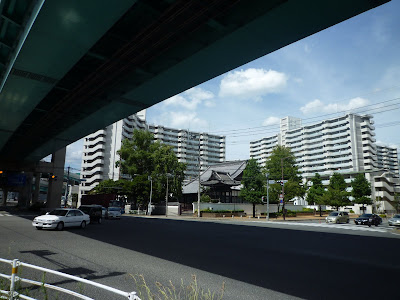 As is this one: 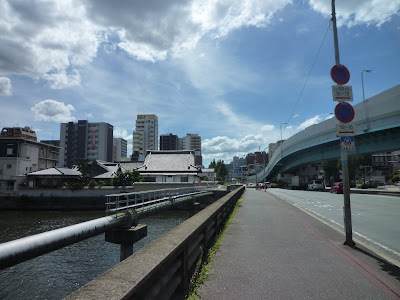 I should stress that I'm not saying that the whole city should have preserved its "historic" look, there clearly would be high costs involved in doing so. But in at least one neighborhood like Gion it would have been nice. The way it is now, tourists always bypass Gion (and Fukuoka for that matter). Shofukuji by virtue of its size and the presence of some mature trees that block out the surrounding highrises, billboards and power lines, is the only temple really worth visiting - and not many people will go out of their way to see just one temple, nice though it is: 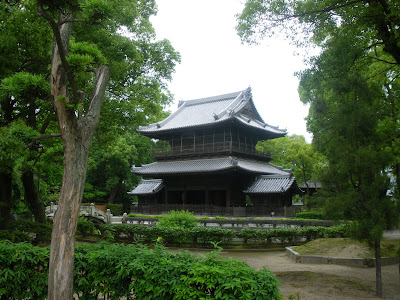 If they had taken steps to prevent the usual urban sprawl from spreading over the entire area and preserved it as a sort of historic neighborhood - or at the very least imposed some height limits on building in the area - it could have been a major tourist draw for Fukuoka. As it is now, its just another drab neighborhood.

Temples aren't the only victims, other examples abound. The Ishikura Sake Brewery is one of the prides of Fukuoka, promoted by all the tourist brochures and housed in buildings more than a century old that are absolutely beautiful: 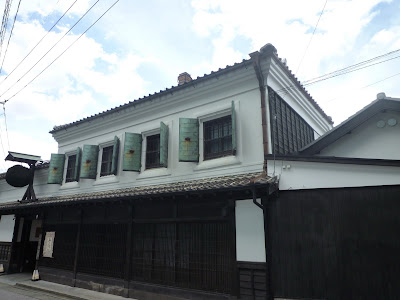 But when we "zoom out" would you really want to visit a place, however nice, that is surrounded by all this?: 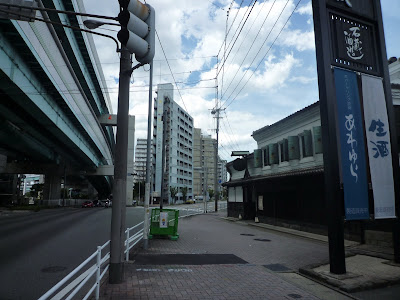 This is the sort of problem that affects pretty much every Japanese city. Fukuoka is actually known more for its modern architecture rather than the traditional so I should emphasize that it isn't really an ugly city - its just a city that has been indifferent to the surroundings of its historic sites. Other cities like Kyoto, the heart of Japanese history and culture which is loaded with enough UNESCO world heritage sites to sink a ship has this same issue, only on a much larger scale. Unsurprisingly the country isn't a major draw for tourists on the international stage.
Posted by Sean at 1:16 AM