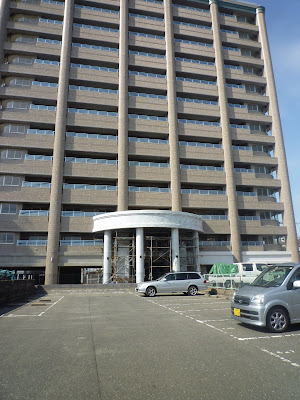 Ladies and Gentleman, I present to you the latest work in the ouevre of Fukuoka's ultra chic condominium developers.

This is a curious creature. It has been under scaffolding for several months now and only recently has its true form been revealed to the world. I ride past it on Route 3 every now and then.

The reason I am posting about it is the building designer's odd choice to incorporate this architectural feature into his or her work: 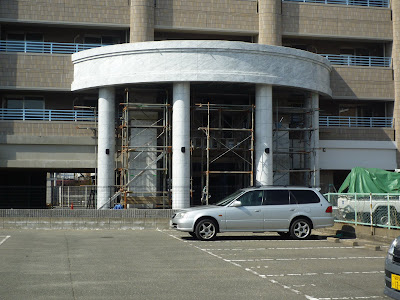 That is a two and a half story high marble clad colonnaded entrance way.

I think pretentious flourishes like this are fine if you are designing, say, the Vatican. But I have to seriously question whether or not the designer of the above edifice ever actually visited the property upon which this innovative use of white marble (-ish) cladding was going to be installed before drawing up the building plans.

You'll notice that directly in front of this massive entrance there is a concrete and metal wall that defines the border of a parking lot which is unrelated to the building. The building is completely inaccessible from the direction in which this entrance faces. A quick look at the alley which will one day be the only way of accessing this massive thing reveals that the clearance between the two is about 10 feet: 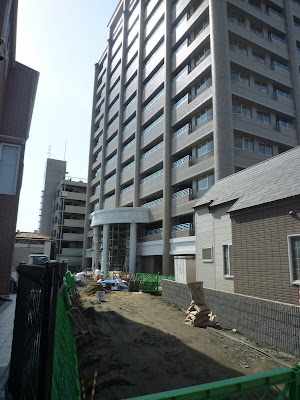 I think what we have here is either a failure to communicate or just some sort of massive failure in the way in which building designers are being educated about balance and aesthetics.

It seems inconceivable to me that anyone could have looked at this building site before construction began and said "Hey, this spot here would be perfect for a two and a half story white marble clad colonnaded entrance. It will really impress the people parking their cars in the parking lot for the discount store in front of it."

And yet here it is.

There is a lot I really don't understand about the Japanese housing market. I am assuming that this ridiculous entrance added cost to the building, which will ultimately be passed on to the people who end up purchasing condos in it. Yet those people will be completely incapable of viewing this imposing entrance because the only way of accessing it is from a side alley in which it is barely noticeable.

Perhaps not having to look at it will be worth the extra cost, I don't know.

I also have to question the logic of building luxury condos in an area that looks like this: 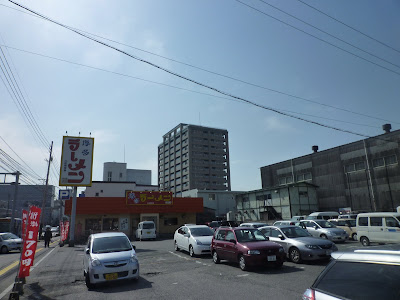 The building (in the centre of the above photo) is surrounded on all sides by warehouses, factories and parking lots. Not a tree in sight. Its a big mystery. These condos will be expensive. People with money can afford not to live in miserable, ugly areas like this. Yet luxury condo developers build them here nonetheless.

Yet another layer of Fukuoka Higashi Ku's mysterious nature unveiled.
Posted by Sean at 8:45 PM