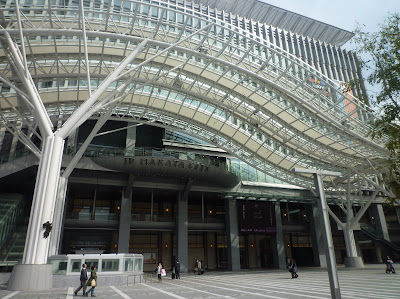 If you haven't done so already I'd just like to remind everyone that there is plenty of time left to donate to the tsunami relief efforts. Loads of people out there need your help! Info on places to donate if you are in Japan or Canada I put in this previous post.

One of the side effects of the disaster - which it bears repeating is the worst natural disaster to ever strike an industrialized nation - in Kyushu has been the cancellation of a bunch of train-related PR events. The Shinkansen which opened between Tokyo and Osaka way back in 1964 finally made its way to this backwater a couple weeks ago. Well, actually its been in Fukuoka for a while, but they only just completed the Kyushu line, which connects all the way down to Kagoshima. The Kyushu Shinkansen made its massively anticipated first run on March 12, 2011 - a day that planners thought would be one just like any other but in actual fact turned out to be the day after the disaster. While the train ran on time, all the celebratory events that would have attracted massive crowds were, as one would expect, quietly canceled.

Some of these events revolved around Hakata station, Fukuoka's main station and one end of the new Shinkansen line. The station, whose entrance is pictured above, itself opened for the first time just days before the quake hit.

Since I arrived here two and a half years ago, Hakata station has been more or less a giant construction site that somehow managed to also serve as a train station. The new building is a massive structure that has been in the works for years. I have no idea what the old station looked like. The new one is 10 stories tall, most of which are devoted to the 229 stores that the massive shopping complex houses. Its construction has created a bit of controversy as its sheer size is seen as a threat to the merchants in Fukouka's other centre of consumer gravity, Tenjin, which looks to lose a lot of shoppers to the new behemoth.

The ribbon cutting ceremony of the station went ahead before the quake, but everything else has been canceled. Nonetheless, the station has become a massive attraction in its first couple of weeks. Ena and I decided to head over today to have a look at the thing as it has a ton of restaurants that we wanted to check out for lunch.

The entrance is quite impressive. I really do have to learn to take these "couple self-photos" in a manner that does not accentuate my double-chin though: 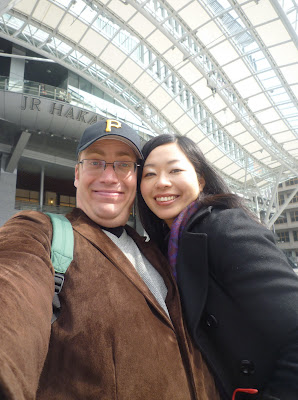 The place was an absolute zoo. Wall to wall people, from the 1st floor to the 10th (we went through them all). We got a seat at a Mexican restaurant on the 9th floor, which was quite nice. We had non-alcoholic margaritas with our lunches for just 100 yen extra: 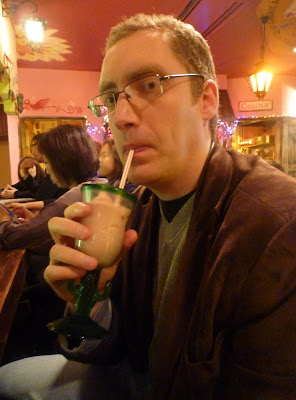 After that we headed down into the cavernous interior of the beast: 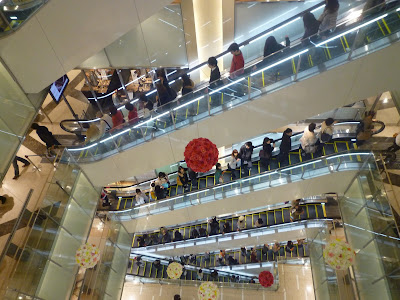 They've got a lot of stores. A lot. Trust me. No shortage of stores here. Mostly clothes.

Some of them had neat stuff though. At the Tokyu Hands department store they have a fake lego model of the Fukuoka Dome with a baseball game going on which I though was really cool: 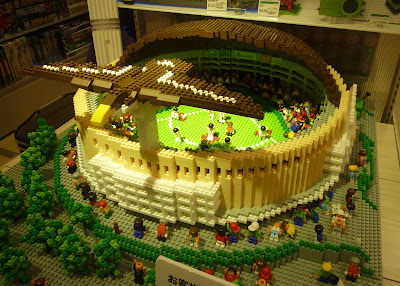 They even had little people playing the game and sitting in the stands. I want this, but it isn't for sale: 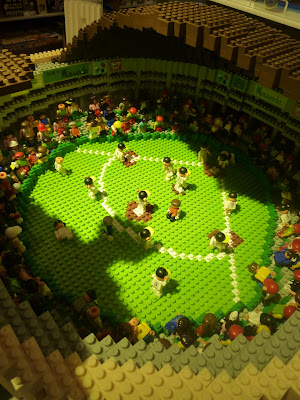 On the 8th floor I did a double take when getting off the elevators. They have a model railroad shop: 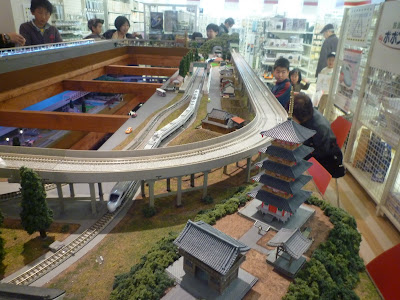 I love model railroads. My earliest childhood memory is from Christmas of 1979 when my dad and Grandpa surprised me with a big electric railroad that they had spent some time putting together. They are the best. Later in the 1980s when my Dad was transferred to Germany we put together a German railroad set together, which was a lot of fun. Looking around at the big train set they had in the store I recognized some of the buildings as being the same as our German set: 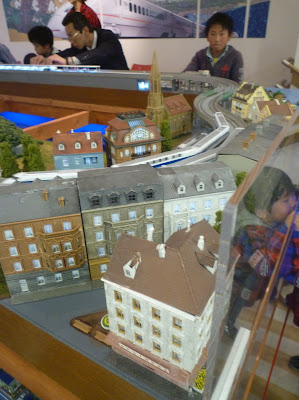 I convinced Ena to let me have a look. I love stores like this. With everything set up in glass cases looking really good: 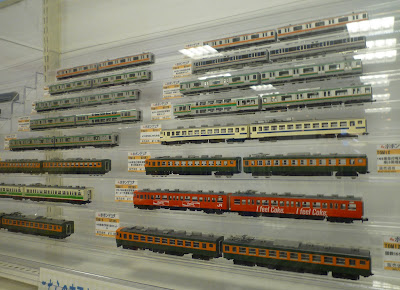 You can see where this is going. Ena was really sweet and bought a train for me.

We couldn't afford any of the expensive new ones in the glass case, but this shop is great because it sells old used ones too for a lot cheaper. So we got one of those.

This is what it looks like. "N" scale. They come in their own box: 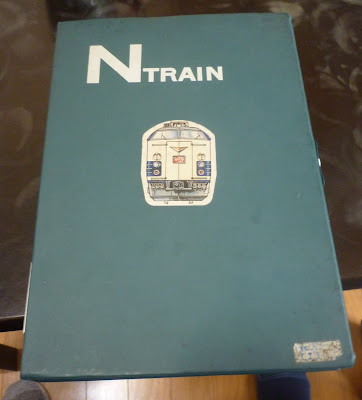 Open it up and hey, a train: 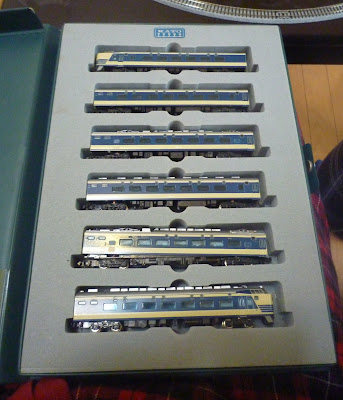 I also got some rails:

And we picked out some little people together: 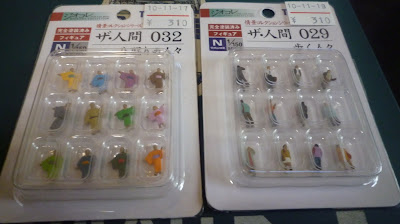 We set them up on the coffee table and played with them for a bit. I have no way to make the train run (no transformer) and not enough track to actually make a loop, so our options were pretty limited: 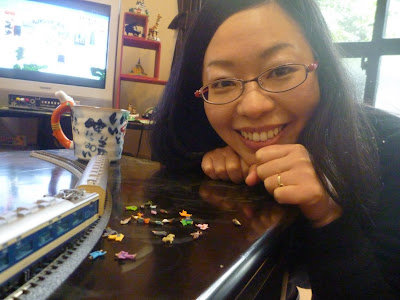 The people didn't come with bases, so they were incapable of standing on their own. We just sort of piled them up here and there, which is all we could think of to do with them at this early stage in our sojourn into model railroading: 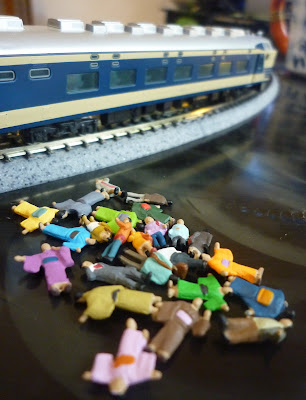 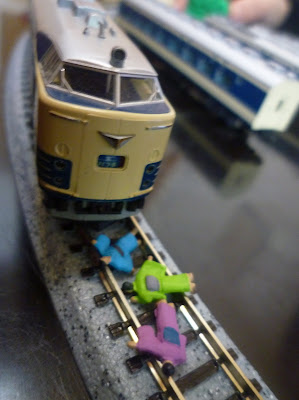 The Shinkansen reached Hakata in 1972.
I used to ride it from there to points North when I first lived in Fukuoka in 1978.

Interesting, the station must have looked quite a bit different in '78!

Love your blog, Sean. My family (Mark, American professor, wife, Japanese/American professor, three kids ages 5-6) living in Tokyo and planning our first trip to Fukuoka in early June. Got lots of great ideas from you blog! Thanks!!

Thanks for the comment, Mark! I hope you and your family enjoy your trip to Fukuoka, its a pleasant little city! I'm glad to hear that my blog may have given you some trip ideas!

Basically the station was the same until the recent complete rebuild.
I was there is 2009 and saw the new station still under construction. Back in 1978 the Shinkansen was a techical wonder to me (I was 21 years old). It was all the original "Type O" train type.
I love Fukuoka! It has changed so much since the 1970's - the skyline was much lower and smaller in scale, the entire area where the tower and Fukuoka Dome is was under water! The land ended right behind Seinan University!
There was NO subway - they were building it and the whole length of the lines were a massive construction project.

Thanks for the interesting post. I've often wondered what Fukuoka used to look like. I've seen plenty of pictures but it must have had quite the different feel to it back then!

mark,
Yes it was a mix of old and new, lots more of the old and much lower. The high rise condo tower forest in the center did not yet exist.

Many of the neighborhoods around Tenjin to the south and west (Yakuin, Kego, Sakaruzaka) had hundres of fantastic old classic homes and small apartment buildings. They are mostly gone now, the late 1980's bubble resulted in a building boom that leveled and replaced SF homes with all of the high rises.
I lived in a very old big traditional house surronded by a garden, I had my own room on a wing by itself (so nice). It is gone now, the family (we are stil friends) replaced it with a new structure but kept the garden - the old place was just too hard to maintain.
The subway really transformed the city, there used to be a street car system, it was taken out and was eventually replaced by the subway system. When I first arrived in Fukuoka in 1978 the street cars were still running on the east side and over to Kyushu U's campus (the street cars were phased out in early 1979).

That is interesting. As a "train fan" I've always wished they had kept the street cars here. I loved the ones they still have running in Nagasaki.

It is kind of sad to hear how all the traditional homes were torn down. I've often thought that Fukuoka would be a much more attractive and tourist friendly city if they had set aside the area near Gion with all the temples as a historic preservation area with limits on development. It seems that as recently as the 70s that was still all traditional homes and quite attractive. Instead it now looks more or less like every other part of town - tall apartment buildings and eyesores all around!

Sean
You are correct about the loss of the smaller scale around the central area sort of ruining the feel.
My father in law lived up in Ozasa on a hill top. He tried stoppong the building of massive condos on the hill tops all around the neighborhhod - he was right. The condos resulted in the loss of tree cover and the bird population plummeted! It was silent after the towers were built, the hilltop forests were the habitat of huge numbers of birds.

The castle ruins were a high spot with a nice vantage point across town.
The street cars were really charming. They were like the ones in Nagasaki and Kumamoto (gone now?).
I was curious about what you are doing in Fukuoka exactly?
I lived there in 1978/79 and 1981. My wife is from there so I've been back many times, the lastime bein 2009.
I enjoy your blog, you notice all the interesting stuff.

Thanks. It is really a shame that large condos have taken over places like your father in law's residence. Actually I live on a hilltop in the suburbs (Higashi Ku) and one of the main reasons we chose the place is because it still had natural tree cover and lots of birds. Its one of the last places left even out here where it is possible to see natural growth trees. Thankfully the slope seems to be too steep for anything to be built on it, so I'm keeping my fingers crossed that our trees don't get chopped down, though I'm always worried about it happening.

I'm doing a Phd at Kyushu University (Hakozaki campus), which is what brings me to Fukuoka. I've been here since 2008 and have about a year and a half left. I love the city and will be very sad to leave when its finished!

Unfortunately I believe the streetcars in Kumamoto are gone too. At least I didn't notice any there when I visited a couple years ago.