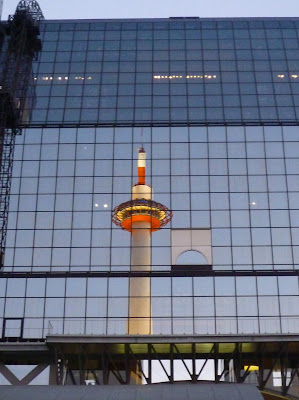 Two of Kyoto's more contemporary sites of interest exist side by side in the centre of town: Kyoto Station and Kyoto Tower.

Kyoto Station was opened in 1997. Designed by Hiroshi Hara, its one of Kyoto's more controversial structures. It is massive. 70 metres high and nearly half a kilometre in length, it looks as if someone parked an aircraft carrier in the middle of the city. A lot of people hate the thing because it is totally out of touch with Kyoto's traditions - no elements of the traditional architecture the city is (or was) famous for are to be found in it and the sheer scale of it just totally overwhelms everything around it. Its external appearance is also pretty awful, the aircraft carrier analogy applies not just to its size but to its aesthetic qualities, though in fairness it does have a lot more windows than a carrier does.

Anyway, a lot of other people have already written about what a massive vanity project the thing is so I won't go much further into that. I think its critics probably place too much emphasis on the building as the "destroyer of traditional Kyoto", a process that was already well under way by the time the thing opened. It also has to be noted that the previous station built in the 50s which it replaced was a pretty god-awful piece of work too.

It does at least have the benefit of being an interesting place. The unnecessary flourishes which the architect included, which really represent the height of bubble-era ostentation in public works projects, are an impressive sight. The interior looks like it could easily house the Hindenberg: 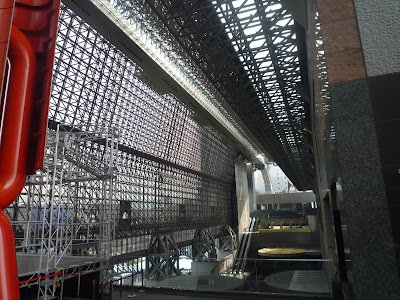 It has all sorts of useless "stuff" cluttering up the view, which actually makes the gray-ness much more palatable : 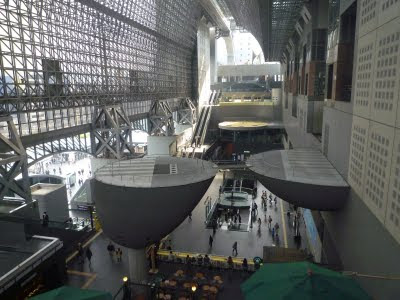 The most interesting feature of Kyoto Station is the massive set of escalators. They take you from street level all the way to the top of the building in one long, continuous route. After the second floor, they are almost completely empty. Its a unique experience to ride them though, especially at night. I took a video of the whole journey from top to bottom here, with musical accompaniment and everything!

As a side note, this is a picture of the Kyoto station police office: 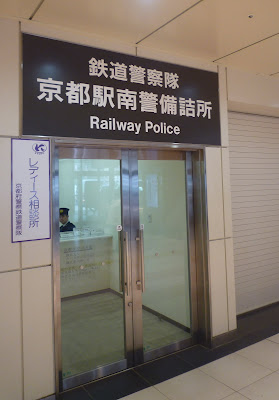 This provides for a brief detour into one of the more unusual and little-known side effects of the plethora of escalators which Kyoto Station is endowed with: creepy old men using hidden cameras to take up-skirt videos of women on said escalators.

We were watching a news program (kind of a Japanese '60 Minutes' type of thing) a few months ago which did a piece on this issue. Apparently it has become such a problem that Kyoto station actually employs a plain clothes police officer whose job it is to patrol the station looking for these guys.

The piece was actually kind of amusing because while filming (with a hidden camera) the officer actually caught a guy doing that. He had a video camera hidden in a briefcase with a little hole in the side. I say it was "amusing" because it really was amusing to watch a guy trying to quickly come up with a valid reason for having a hidden video camera in his briefcase that he was carrying while repeatedly going up and down the same escalator. Try doing it yourself (I mean thinking up such an excuse, not taking such videos), its all but impossible.

Moving on - across the street from the station is Kyoto Tower. Built in the 60s, it also has been criticized for many of the same things that Kyoto Station is (ie its complete lack of connection with Kyoto's past). 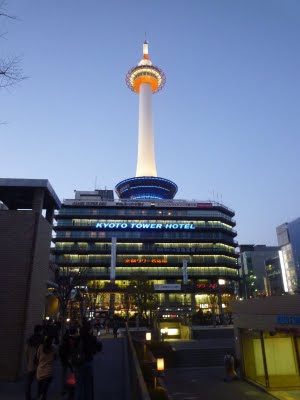 I have to say that I really dislike Kyoto Tower. I've never been up it, but I've been in the building a couple times. The reason I've never gone to the top is that it costs 700 yen to do so. To put that in perspective, we visited more than half a dozen top class UNESCO world heritage sights in the city during our trip and not a single one charged that much for admission. And this is just to ride a frigging elevator! Also it needs to be pointed out that the observation deck at Kyoto Station across the street is completely free and provides almost as good a view (though its a bit shorter).

And the fact that Hakata Port Tower, which is almost exactly the same as Kyoto Tower, is completely free to go up does nothing to endear Kyoto's star attraction to visitors from Fukuoka either. 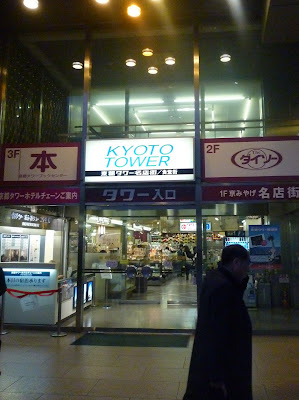 Anyway, as I've said I've been in the building a couple times. The first few floors are souvenir shops and there is a book store as well. The souvenir shop on the ground floor looks like something out of the 60s (which it is): 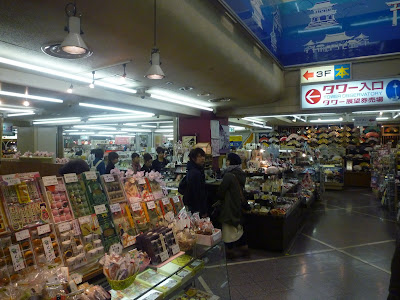 I really hate the souvenir shops at Kyoto Tower though and recommend avoiding the place entirely. The sales staff are some of the pushiest I have ever experienced in Japan and their entire stock is just the regular crap you can buy anywhere.

Anyway, that is the Station and the Tower - probably the first two things that any visitor to Kyoto will see and, ironically, probably the two least attuned to the things people come to the city to see.