My Lunch with Fabio and Alessandra at the Naughty Book Store 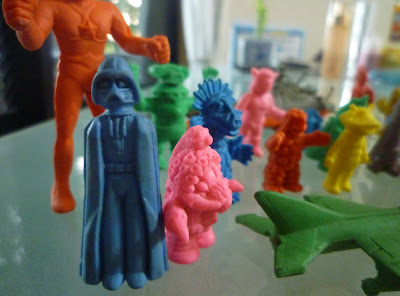 Lunch today began innocently enough. I had just finished a meeting and two of my colleagues - Fabio and Alessandra - were wondering what to do for lunch.

"How about the place in Hakozaki we usually go to?" Fabio asked.

"Well, its probably packed at this time" I said, looking at my watch.

"How about the Pizza and Pasta place at Yume Town then?" Fabio replied.

We had reached an impasse.

Suddenly a thought occurred to me.

"Hey, I know. Why don't we go to Maxim City? They've got an Izakaya style restaurant on the second floor that I've been wanting to try."

Fabio and Alessandra had not heard of this place, but it sounded acceptable and so we donned our hats, clambered onto our bikes and pedaled off in the direction of Maxim City, with little knowledge of the hilarious hi-jinx that awaited us.

Maxim city (AKA Omocha Souko) is probably my favorite store in Fukuoka. Its a weird place. Outside they have a statue of a giant naked robot man: 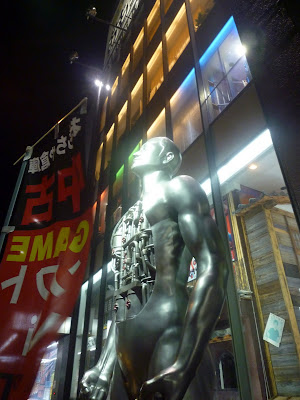 Inside its basically a giant cavernous shrine of used crap. Toys, clothes, shoes, books, electronics, video games: you name it, they've got it. Cheap. I go there all the time and often come out with bags full of crap that I don't need but couldn't resist buying because it was so cheap. I love it. Impulse purchase paradise.

Its all decorated like a Showa-era town inside, which is kind of cool.

Fabio and Alessandra weren't familiar with the place. Fabio, looking wide-eyed at the immense shelves bursting with garbage nobody needs, had trouble trying to figure out who on earth would shop at such a place.

"Me." I offered helpfully. "I mean, look at this" I said, picking up a bag of random crap:

For those who don't know, 100 yen is a pretty good deal for a bag of crap.

The restaurant was located on the second floor, down a cute hallway decked out to look like an alleyway in an old town: 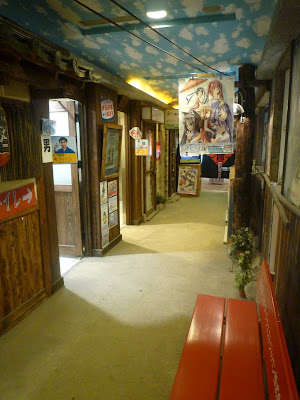 Lots of random old stuff placed here and there to give the place some atmosphere: 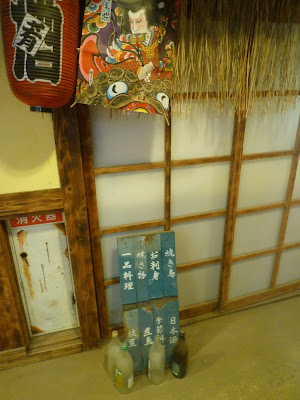 When we got to the end of the hall, I slapped my forehead and could just laugh at the sight that awaited us.

I hadn't actually been to this restaurant for lunch before, I had just seen signs for it in the past and thought it might be good. In retrospect though, now that I think about it, I haven't actually seen any of those signs in a few months.

Which is explained by what we saw at the end of the hallway: 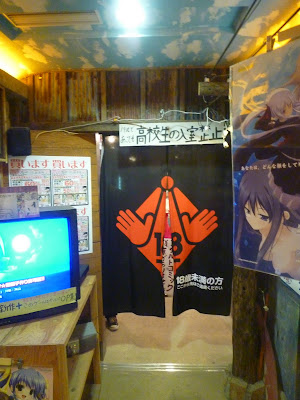 A black curtain saying "No one under the age of 18 allowed" supplemented by the white, handwritten sign above which read "High school students are not allowed to enter this room."

Yup, the restaurant had been turned into an (AHEM) naughty book store.

Oh how we did laugh.

Laugh, that is, until I voiced an idea:

"Hey, this'll make a good blog entry, let me get some pictures."

At this Fabio and Alessandra, legal professionals in their respective home countries with reputations to uphold, expressed some concern.

"Don't take a photo of my in front of a place like this" Fabio exclaimed, running to get out of the frame of my shot.

"It'll be funny! I need some reaction shots from you guys to make the narrative in the post work. Make a face like you are angry at me." I said reassuringly, chasing them with my camera.

Sometimes this blog really does make me forget all sense of decorum.

Anyway, we left Maxim City (myself sans reaction shots) and went across the street to have lunch at a refreshingly family-oriented tempura restaurant. We had a good meal there. After getting home I did an oil painting from memory of Fabio and Alessandra enjoying their lunch: 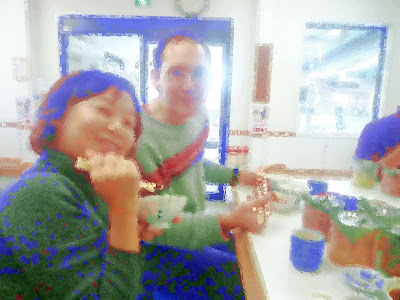 And then we went back to campus to get back to our respective work.

On the way home I dropped back into Maxim City and picked up my obligatory 100 yen bag of crap: 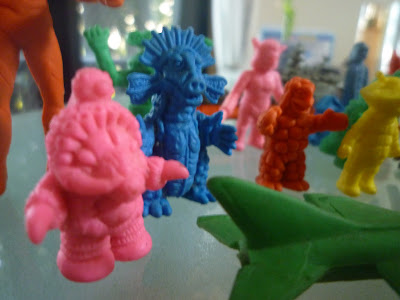 I love that place. How could I NOT buy shit like this when it is that cheap? I mean, c'mon.
Posted by Sean at 11:50 PM