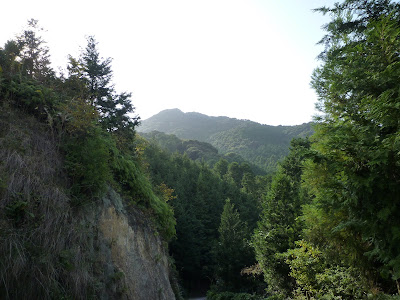 On Saturday mornings I teach English at a law firm downtown. After yesterday's lesson I decided to take a bike ride to the southwest of the city, which I had never been to.

Without any particular destination in mind I rode for about an hour until I noticed a rather pleasantly shaped mountain with a large shrine gate visible about 1/3 of the way up: 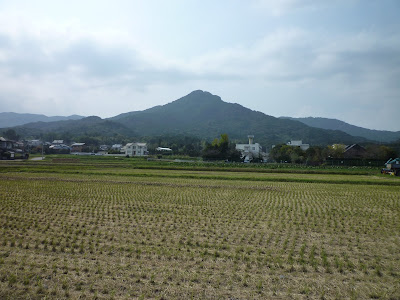 Out of curiosity I cycled over and found the entrance to a hiking course leading to the peak of the mountain (Imori mountain).

I set off kind of expecting it to be like most hiking trails I've come across - relatively gently sloping and without any need for extreme exertion. This trail started that way, but the final 1/3 of the ascent was up an extremely steep, rugged trail that required scaling some near vertical parts using ropes: 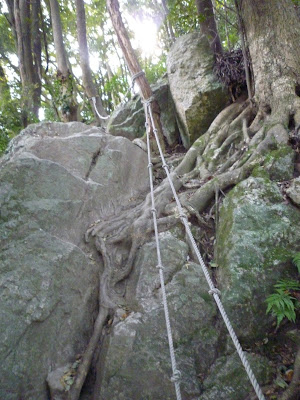 Bearing in mind that I had just come from work and wasn't wearing any climbing gear, I nonetheless pressed on. Though after a while I got quite tired of the tough slogging and took a self-portrait: After about an hour I reached the top, 382 metres up: 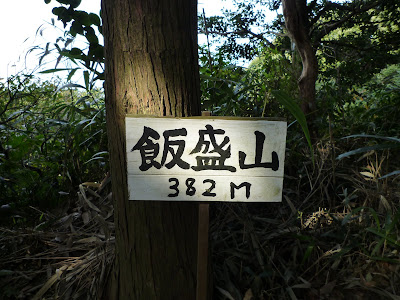 The view from the peak was quite nice: 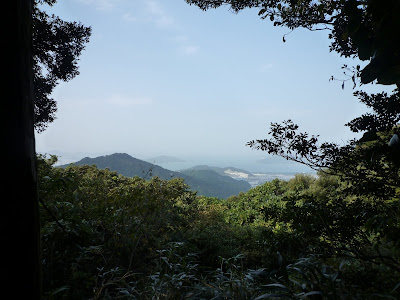 I met an old man at the peak who lived in the area and climbed the mountain everyday. I talked to him for a while, he was a volunteer who cleaned up the trail. He told me that every year people had accidents on the steep part and sometimes had to be airlifted by helicopter to hospital, which didn't surprise me.

After that I headed back down, which was even more difficult as I had to basically rappel down the vertical bits. After getting past that steep part I took a different route down than I had going up and was rewarded with some nice scenery: 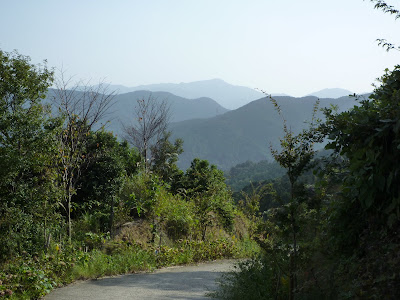 On the way down I crossed paths with the old man I had met on the peak and we walked down together. He told me about this natural spring on the mountain that he got his water from every day to make his coffee. Near the bottom he pointed me down a path leading off into the woods to the left where the spring was and I headed down to take a look, parting ways with him. At the end of the path was a small temple and, sure enough, a bubbling spring. Despite being in the middle of nowhere there was actually a sizeable crowd of people waiting in line with plastic bottles to fill at the spring - apparently it was quite famous. I finished off the last of the water in my 2l bottle I had brought with me and got in line. I was able to fill my bottle up with some fine pure spring water right from the source: 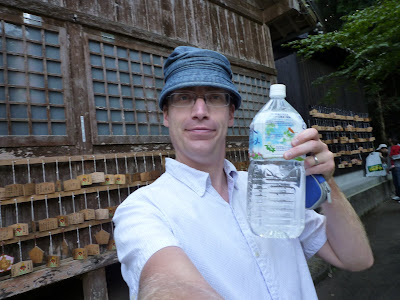 To be honest it basically tasted just like any other water, but I was quite proud of my find nonetheless and forced Ena to try some when I got home!
Posted by Sean at 8:18 PM

Email ThisBlogThis!Share to TwitterShare to FacebookShare to Pinterest
Labels: Fukuoka by Bicycle, Imori

My Interview With God said...

Hi Sean! This is Abi from the LLM IEBL program. I'm going to see Michiko-sensei this Friday pm but I don't know how to get to friend. Can you please give me some directions? I will be coming from Kyudai and will go back to the kaikan after. Thanks!!