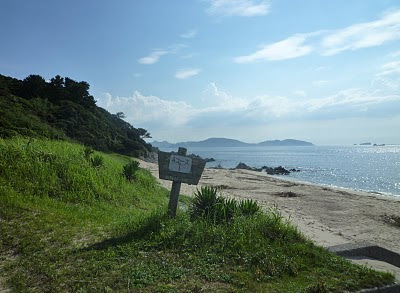 I haven't posted on this blog in over a month now. Part of the reason is that on July 11 I had a major presentation to make and I was busy in the month leading up to that with preparation, etc.

Another reason though is that one day in the middle of June it started raining. And then it didn't stop until about 3 days ago. Kyushu's rainy season lasts about a month and for its duration Ena and I were pretty much stuck at home on all the weekends.

Yesterday was a really brilliant Saturday. I like sunny Saturdays a lot. I do a lesson downtown in the morning and Ena works Saturdays, so we ride our bike in together. Its a really nice ride, we go through a bunch of parks and some of the more "colorful" areas of downtown on the way in. 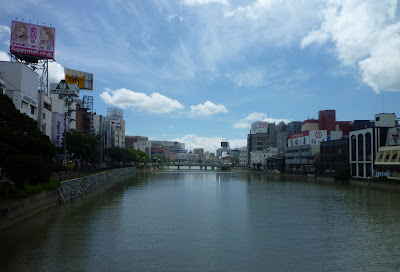 I finished my lesson at about 11:30 and had a sunny day to play with for the first time in over a month. I didn't want to be entirely unproductive though, so what I decided to do was bring some papers that I need to read with me to the beach at Shikanoshima.

After stopping at home to get changed and pack a lunch, I hit the road. It takes about an hour by bike to get to Shikanoshima from our place. I stopped along the way at this one little spot: 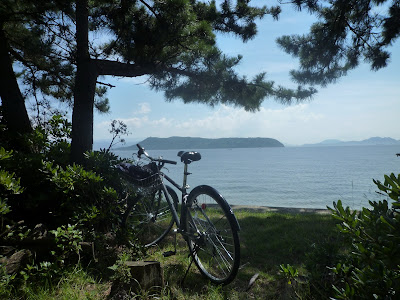 This is on the penninsula leading up to Shikanoshima. Just a tiny clearing in the trees along the roadside which offers a perfect place to sit down for a snack while enjoying the view of the Bay.

After arriving on the island I decided to circumnavigate it in a clockwise direction, which would allow me to ride on the side of the road facing the sea (best views). Its a really nice ride on a clear day. I stopped at Kin-in park and enjoyed their map of East Asia in ancient times: 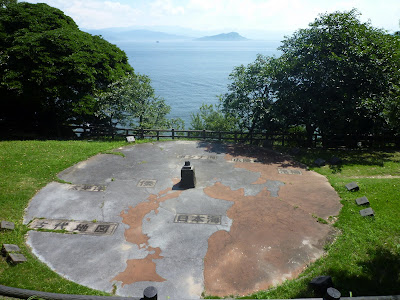 After a while I came across the entrance to a hiking trail. Parking my bike I head off on foot up the hillside overlooking the sea. It was insanely hot - about 33 and humid - and by the time I reached this nice viewing platform I thought I was about to pass out. It had some really great views though: 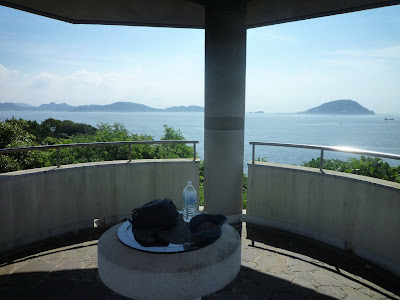 Climbing down the hill I reached my ultimate destination: the Beach!! 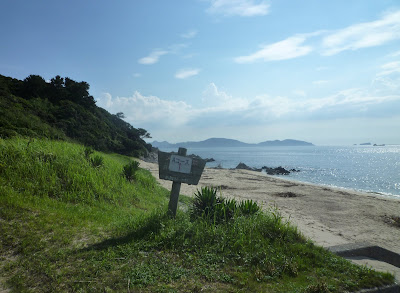 I had the foresight to pack my swimsuit and a towel. I jumped into the filthiest public bathroom I have ever come across to get changed and then made a beeline for the water. I was a little worried about jellyfish but the second I put my feet in the water it felt so nice and cool that I just jumped all the way in. It was great, I spent about half an hour floating around on my back, enjoying the view of the islands. It was a Saturday so there were a few other people there, but not too crowded.

The sun was quite bright and glistened off the water: 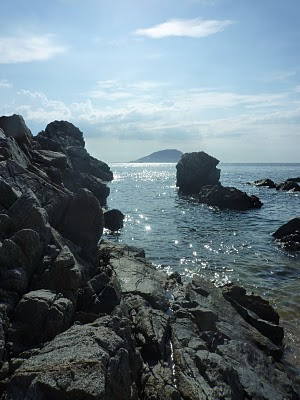 After my swim I dried off and got dressed again and started hiking along the rugged rocky Shikanoshima coastline away from the beach in search of some solitude. After a bit of walking I climbed up the biggest rock I could find: 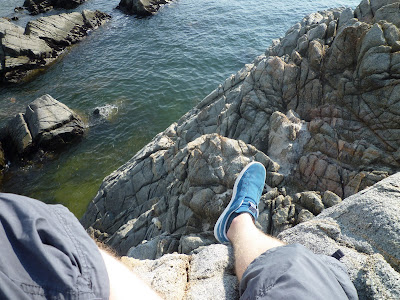 It had a nice view: 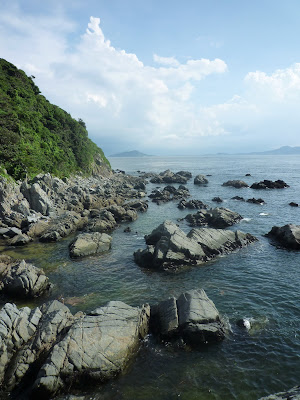 And I got down to some actual work. Read this article about class action lawsuits (and felt the need to photograph myself doing so to prove that I did in fact do something productive that day): 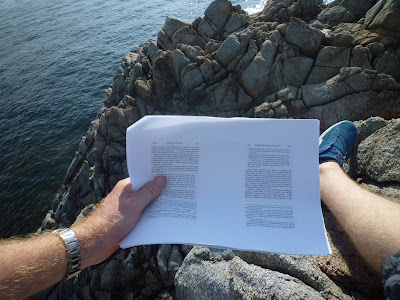 After finishing the article I clambered down and did a bit more walking, coming across some interesting rocky outcrops here and there: 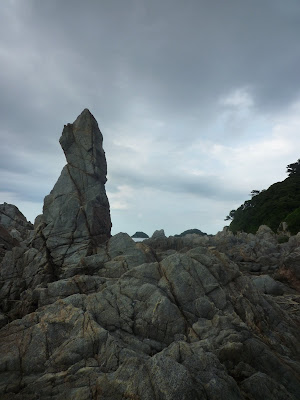 At about 5PM some storm clouds started moving in and I decided it was time to call it a day. The suns rays fought through the newly arrived clouds and made for a pleasant scene:

To get back to my bike I unfortunately had to climb back up the hill which I had come down. I paused to take a picture of a fishing boat passing in the distance from the top:

I got back to my bike and decided to return the way I had come rather than completing the circuit around the island. The clouds were starting to dominate the bay: 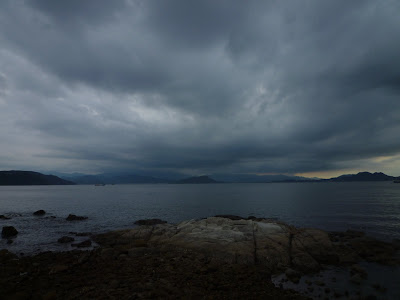 The above picture was taken about 2km or so from a village that sits at the entrance to Shikanoshima (where there is a bridge connecting it to the mainland). After taking the shot I rode those 2km to the village, where I saw something else I wanted to take a picture of. Only when I went to grab my camera, it wasn't there. I had dropped it somewhere along the roadway.

With the stormclouds and darkness moving in I desperately retraced my path, scouring the roadside while trying to avoid traffic at the same time (its a narrow road with no shoulder). I got back to the place where I took the shot without finding it. There was a mobile cafe (a mini van decked out like a restaurant) set up there and a few people on lawn chairs relaxing with some drinks. I went up to the group and asked if they had seen my camera. They were really nice, everybody put down their drinks and started looking around for it. A couple of 7 year girls were quite enthusiastic and made a point of scouring the beach for anything blue (the color of my camera case). I didn't have the heart to tell them I couldn't have dropped my camera there, they were having a lot of fun.

The search turned up nothing, so thanking them I headed back towards the town, carefully scanning the ground but without luck.

On arriving in town I noticed there was a police station and thought I'd give the officer on duty my name and number just in case someone dropped it off. I opened the door and the officer was on the phone. In front of him on his desk was my camera! Someone had found it and turned it in! I was so happy!

And I got to take the picture of that thing in town: this little guy: 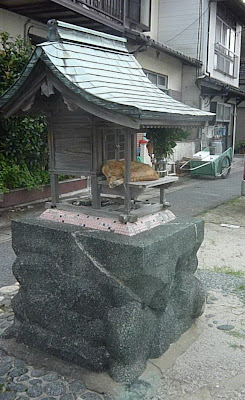