Yesterday was a sunny Sunday so Ena and I decided to have some fun. It was oppressively hot and humid so we didn't feel like going anywhere far or new. Instead we just went into town. We had lunch at one of the hundreds of really nice cafes in Tenjin and then headed over to Ohori Koen, where we decided to do some nautical recreation.

So we piled in and off we went: 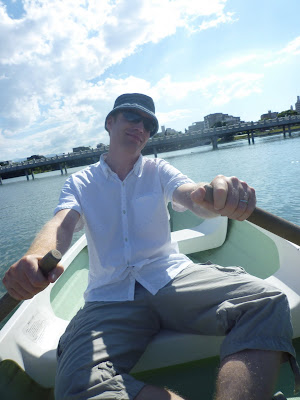 We basically followed the same course I had gone on with Natsu and Simon, except for about ten minutes when Ena joined me on the oars: 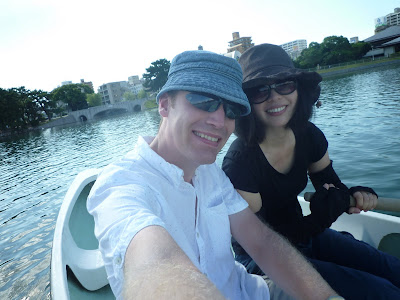 For those ten minutes we just went in circles due to (ahem) a slight imbalance in engine power on each side. Circles are fun though so it was great, Ena really got into it: 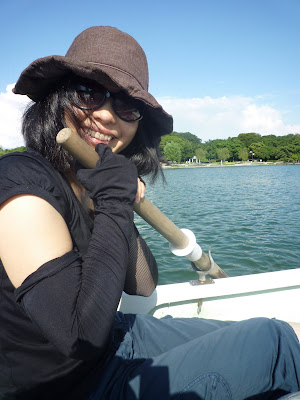 After that we headed over to Momochihama to get some ice cream on the beach. One interesting thing about Japanese beaches is that, at least these days, you will spot a disproportionately high number of men sporting the nation's unfortunate new fashion statement: the mullet. I'm not sure why but going swimming at the beach seems to be a decidedly working class (read "redneck") activity here and the mullet is becoming endemic.

Stepping onto that beach was a bit like stepping into an OHL hockey game circa 1989, at least in terms of male hairstyle. Except that every guy on the beach looked like he spent about half his salary on various treatments, gels and other hair-care products to maintain a style that the hockey playing youth of late 80s rural Ontario achieved by simply not cutting the hair on the back of their heads.

Anyway, I digress. The ice cream was great. We didn't do any swimming but went into the water up to our knees, which felt nice: 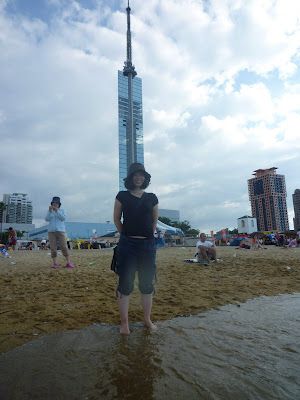 We also checked out the faux-Spanish colonial architecture fake-church-used-for-weddings that forms an interesting backdrop to the beach: 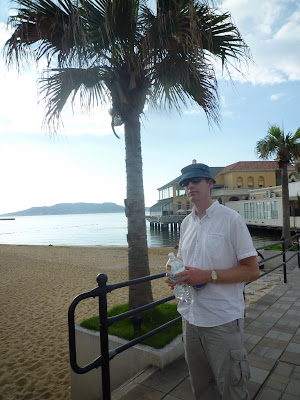