I've had a cold this week and been cooped up at home despite the nice warm weather, which is kind of frustrating. Ena had the day off yesterday but we couldn't do anything. Grr.

Anyway, as a result of my incapacity I've decided to do a blog post about stuff in my apartment. Today's subject: My little box of stuff I collect: 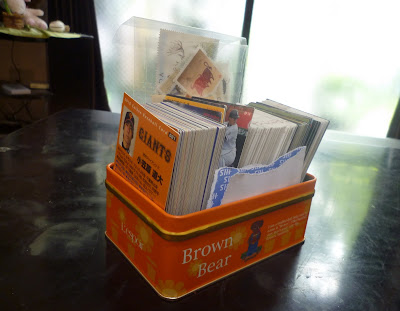 This is a small tin that used to have some cookies in it. I now use it to house my three little collections: stamps, baseball cards and coins. My little baseball card collection takes up most of the space.

I've been a baseball card collector on and off since I was a kid. My collecting days peaked in the late 80s/early 90s when my dad ran a small store selling sports collectibles (best part time job any 14 year old could ask for). By the time the store closed in 1993 (when we moved) I probably had close to 100,000 cards in my personal collection. The last time I was at my parent's place it was kindly requested of me that I go into their crawl space and get rid of as much of my old junk as possible. A large amount of that junk was stack upon stack of boxes filled with those very same baseball cards.

Now, pretty much all of my old cards have absolutely no value today and my dad and I ended up trucking literally 10s of thousands of the things to the salvation army to give away. I even felt bad about burdening them with the things, fearing they would just end up having to pay someone to take them to the dump - that is how worthless they are.

The reason they are worthless is that, roughly concurrent with my peak collecting days, the hobby was being transformed from a rather simple and enjoyable one into one giant pyramid-scheme that, for lack of a better way to phrase it, made everyone and everything involved in the hobby stupid.

I think the general narrative is pretty well known. Up until the early 80s there was basically only one set of cards made per year, so it made collecting pretty simple. If you liked the Montreal Expos there was probably one card of each player out there and for a couple of dollars you could probably collect them all. Not that the cards had any specific intrinsic value to them, but the act of collecting them was an inexpensive little ritual fans could partake of and maybe derive some amusement from.

Then throughout the 80s and 90s things got more complicated. Tons and tons of new sets of cards were being released every year for higher and higher prices. At the peak of the insanity, every player probably had about 100 different cards, most made of plastic rather than cardboard. An Expos fan would need to invest huge amounts of time and money to collect all the Expos cards produced in a given year. By one estimate approximately 81 billion trading cards of all sorts were being produced annually in the US in the early 1990s: that works out to about a dozen cards for every single person on the planet. Every year.

Anyway, this all relates to my little collection box (see - I told you I would bring the tangent full circle) because I think it allows me to experience some of the simplicity of collecting baseball cards that has been lost in North America. The baseball cards I collect are from a company called "Calbee" which has been making them since 1973. You can't buy just the cards themselves, they come as a bonus on the backs of bags of potato chips (2 cards per bag).

I think Calbee does it the right way. Its taken me two years to fill that little box with about 200 or so cards. That is because I can only stomach about one bag of chips per week. So there is a sort of built-in limit on a person's ability to accumulate the damned things that actually makes them more enjoyable to collect. If I could just go into some store and lay down some cash to buy a shrink-wrapped box filled with hundreds of cards, which is the way they are distributed in North America, I just wouldn't appreciate them as much.

The other thing I really like about them is that they keep the design simple and NEVER change it. I hated the way manufacturers started adding gold foil and all sorts of garbage to American cards in the 90s, it just made them look stupid. Simple is good. This is what the cards look like:

Perfect. Picture of the player, his name and his team - all the information you need, no useless shit added thank you very much. The above picture actually shows cards from three different years (2008, 2009 and 2010) - note that the design is more or less identical on all of them - they know enough not to go messing around with something that works perfectly (or they are just too cheap to hire someone to redesign them from year to year, but whatever - it works and I'll be pissed off if they ever try to "improve" them).

The other thing I like is that they are dirt cheap. A bag of Calbee chips costs about 80 cents - which is pretty much the same as what bags of chips without cards cost. Admittedly they ain't the best chips, but they'll do for a light snack.

To continue my rant (I've gone this far, so why not) there is another company that makes baseball cards in Japan: BBM. I hate BBM. Whereas Calbee keeps everything nice and simple, BBM screws everything up North American-style. They release huge numbers of useless sets, add all sorts of shiny shit to their cards, create stupid "tribute" subsets and other barf-inducing attempts at cashing in on false nostalgia and charge way too much money for them. Also they don't make chips or anything else, they just sell the cards. Screw you, BBM.

Anyway, there you go. I'm stuck indoors on a sunny day and wanted to spend an hour doing something other than writing a paper about class action lawsuits and this is what I did. The end!
Posted by Sean at 10:41 PM