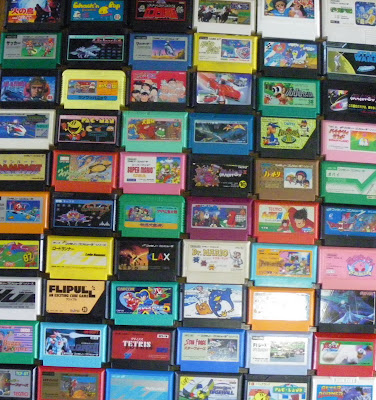 Over the past few months I've somehow gotten into the hobby of collecting old video games. Next to cars and other home electronics, video games are probably Japan's most famous export and you can find shops selling them all over the place here.

The last time I lived in Japan I didn't buy many games. In fact I've never spent much money on games in my adult life, though my parents used to buy them for me when I was a kid and I certainly played them a lot.

The last time I lived in Japan the only games that were for sale were basically expensive new games for whatever the latest system was. Second hand stores in Japan up until recently were almost non-existent and people would usually just throw old things away rather than selling them. That has changed in recent years with the combined effects of economic malaise creating a market for cheaper used goods that still had life in them and a greater awareness of the environmental benefits of not throwing perfectly good things into the trash.

Old video games are one of the things that these new second-hand shops tend to get a lot of and there are a number of them near our place. A few months ago, as I mentioned in an earlier post, I purchased a Famicom at one of these shops for 1250 yen. The Famicom was Nintendo's first video game system. It was released in Japan in 1983 and looks like this: 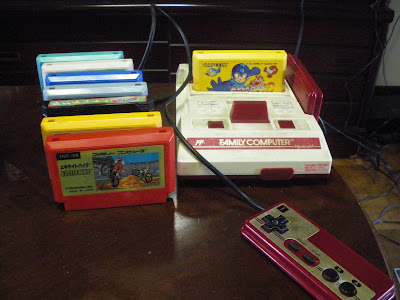 The Nintendo Entertainment System that was released in North America in 1985 has basically the same guts as the Famicom, but it looks completely different. I like the look of the Famicom better, its got some color to it unlike the NES which is basically just a grey box.

Because the famicom games are so cheap it is actually less expensive to buy them than to rent a movie, so they have become a fun way for Ena and I to spend a rainy evening. Ena had a Famicom when she was a kid, so its been kind of fun finding all the games that she used to play when she was little.

One of the second hand shops nearby has been selling packages of 5 games for 200 yen (about $2 Canadian), so I've taken to dropping buy and seing what they had. I picked up two of the packages today and these are the games I got: 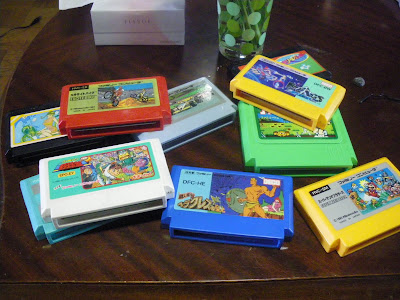 This is one of the other things I like about these games: the cartidges just look cool. They are colorful and the cartoon-artwork on the front looks kind of neat. The NES games, which are all gray, look pretty drab in comparison. These games just scream out "you must have us" whenever I walk through the aisles of the shop.

In today's lot I got Super Mario Brothers. This is what the Japanese version of that game looks like: 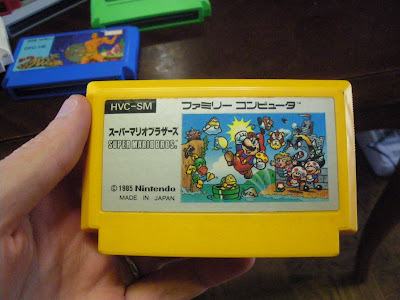 The games are fairly simple, which appeals to me much more than more recent games that are way too complicated and time-consuming. This is what the graphics for "Popeye" look like: 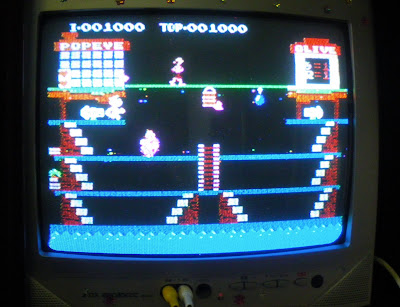 Very simple, but colorful and aesthetically pleasing. Incidentally Popeye was the first Nintendo game ever made for a home console.

I've also got a Super Famicom, which is the Japanese version of the Super Nintendo. I paid 980 yen for it (about $10). Its a newer system than the Famicom so the games are more sophisticated, but its grey and doesn't look quite as cool as the Famicom: 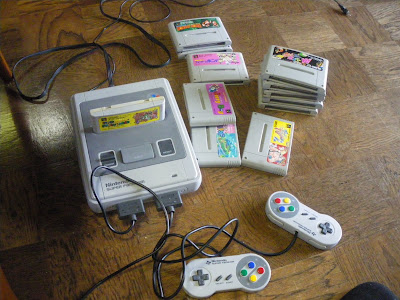 This is what a 200 yen pack of Super Famicom games looks like. I think its a real shame that they introduced this standardized grey cartridge for the Super Famicom, the games just look way less fun and interesting than the older Famicom ones: 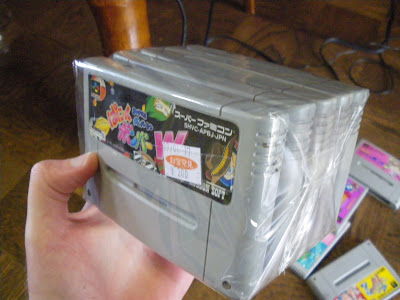 Email ThisBlogThis!Share to TwitterShare to FacebookShare to Pinterest
Labels: Famicom