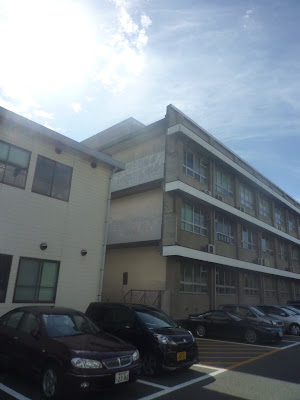 I was riding my bike across campus a few weeks ago when the above sight caught my eye.

Yup, two ugly, ugly buildings and a parking lot. Not much of a sight. What caught my eye was the wall on the larger building on the right. There is a lot of graffiti on the top two sections of it: 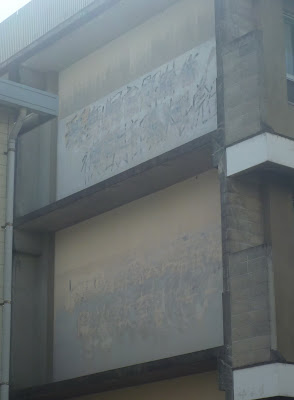 You'll note that someone has expended a lot of effort defacing the graffiti. What I find quite funny is that they obviously had two different people cleaning each section, and each of the cleaners used a different strategy to remove it. These different strategies reflect completely different philosophies about the underlying purpose of graffiti removal.

On the top section, the person basically contented him/herself by defacing the graffiti enough to make it completely illegible. The black ink remains, but so long as you can't actually read what was written, that is good enough.

On the lower section, the person made some effort to cover up the graffiti by using paint that almost matched the color of the wall. Restoring the aesthetic appearance of the wall (such as it is) was the over-riding concern.

What I really like about the person who cleaned up the lower section is that they adopted an extreme minimalist approach. They exactingly painted over only the graffiti and did not get paint onto any part of the wall that wasn't defaced. Basically, they just traced over the graffiti in a different color of paint.

This was very useful because thanks to the fact that the paint they used isn't quite the same as that on the underlying wall, it is still possible to read what was written on the lower section. It says this:

Which crudely translates into "Free the structure of education". Or something like that.

I pointed this out to my colleague Fabio one day and we stood in front of the wall for a few minutes pondering the meaning of it. A professor that we knew happened to pass by and we asked if she knew what it was about. She said that during the 1960s there had been a number of student protests during which activists had occupied some of the buildings and this was likely something they had written during that time. Like us she couldn't read the graffiti on the top section, so its meaning has been lost to the ages.

Fabio pointed out that the graffiti isn't the only whimsical thing about this wall. It has these two rusted out signs posted prominently on the section below the lower graffiti one: 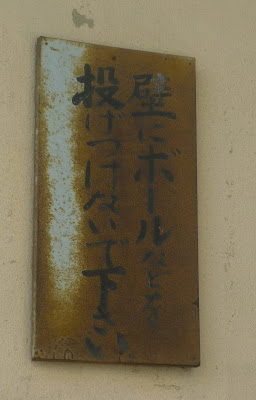 It says "Please do not throw balls against this wall." Of course if you look at the location of the wall, it is in a narrow alley wholly un-conducive to the throwing of balls: 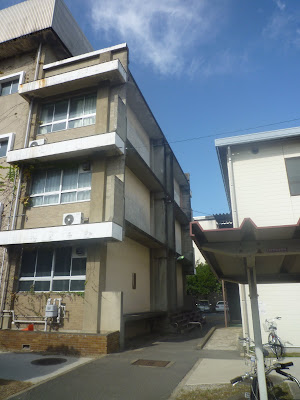 The obvious explanation is that the building on the right in the above photo was built sometime after the one on the left and that during the period before its construction this must have been a popular place for students to play some sort of ball game that must have seriously annoyed the professor who occupied the office adjacent to that external wall. I love the fact that those signs are still up there so long after they stopped serving any practical purpose.

The whimsy doesn't quite end there though. This is also the sight of one of those "staircases to nowhere" that so fascinate me: 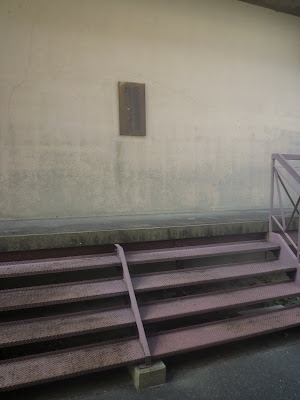 Unlike the "don't throw balls" sign, the existence of this stairway defies easy explanation. To be fair, there is a door on the left just out of sight of this shot, but it has its own section of dedicated stairway. Why did they build these steps leading straight into a concrete wall? Was it part of some government building program designed to soak up a glut of metal staircases on the market at the time? Was it some comical mis-reading of the blue prints that resulted in one side of the building getting too much staircase and another not enough?

I suppose I could ask around and find out, but I rather like not knowing. It adds to the mystery and appeal of this wall. The explanation would only end up being mundane and boring. Sometimes too much knowledge ruins things. Ignorance can be bliss.
Posted by Sean at 5:13 PM