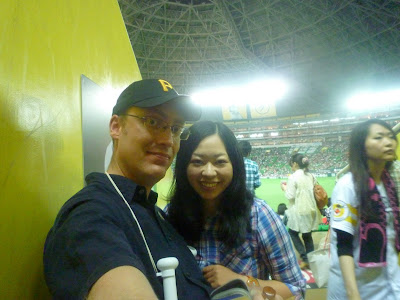 Ena and I saw our first Hawks game of the year yesterday.

They've been having an amazing season so far and are comfortably at the top of the Pacific League standings. Their lineup is a murderer's row full of stars, the guy batting 7th in the lineup, Matsuda, is currently leading the league in home runs and their big free agent acquisition in the off season, Uchikawa, is hitting close to .400.

We got our usual seats in the right field cheering section. 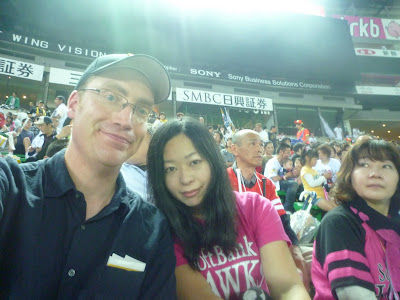 I had to go to the game from work in the morning so I didn't have my Hawks shirt.

It was an inter-league game against the Yokohama Baystars, who are currently last place in the Central League. The Hawks had won 7 in a row going into the game and were undefeated in all their interleague games. They extended both streaks by drubbing the Baystars 7-1, which was fun to see. Matsuda hit a bases loaded triple in the first inning, which was probably the highlight.

They changed the big flags that the Hawks' fan groups wave in the 7th inning stretch and after a victory this year: 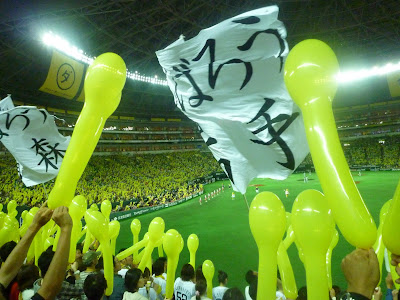 Usually the flags feature stuff related to each fan group, but this year they all have messages of support for the prefectures devastated by the tsunami. The one in front of us said "Ganbarou Iwate" ("Do your best, Iwate!").

After the win we stuck around for the victory fireworks. I took a video of these at a game last year here. Always the highlight of a Hawks win, not so much for the fireworks themselves but more for the way the dome looks with the lights out.

After that we joined the masses spilling from the stadium into the edge of a typhoon that was passing to the south of Fukuoka. 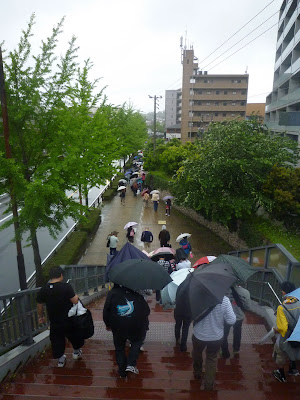 And made our way to the subway station and home.
Posted by Sean at 5:20 PM