This is me having yakitori (grilled chicken) in Nagasaki after we spent the first day of our trip there touring the temples and other sites (see previous post): 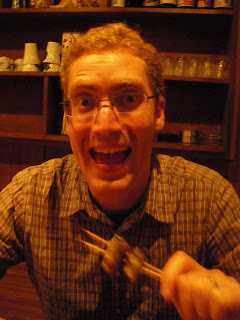 (I told my Japanese language class that I had yakitori in Nagasaki and the teacher was shocked that I didn't have Chinese food, which is what everyone else who goes to Nagasaki does.)

The second day we went to Glover Park, which is a nice hillside park with a lot of Meiji-era western style houses that were built mostly by English traders who lived there. There is quite a nice view of the city from there. 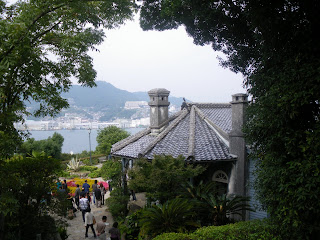 At the park we stopped at the oldest western-style restaurant in Japan. American President U.S. Grant ate there on his visit to Japan in the 1870s. We had cake and high tea while sitting at this table, which had a panoramic view of the city (cost: about 7$ each. The Empress Hotel is such a rip off in comparison). A nice tourist from the UK who was sitting across from us took this picture: 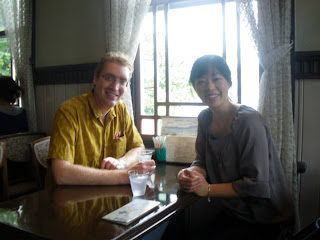 We also went to a Confucian Shrine, which was neat. We encountered a bunch of ninjas there so Ena, in a moment of slapstick-hilarity, pretended to be one of the statues of the sages and we were able to get out OK: 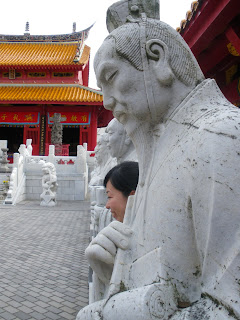 Another interesting thing we found was the site of Japan's first Bowling game, marked only by this little stone post wedged between a drinks machine and a street vendor selling jewellery. 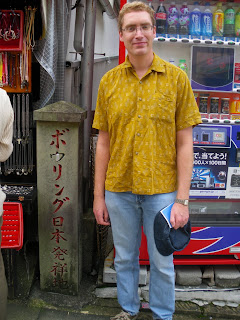 We did a lot more stuff, but this blogger only lets me put 5 pictures up per post so I'll end it here.
Posted by Sean at 2:52 AM

Email ThisBlogThis!Share to TwitterShare to FacebookShare to Pinterest
Labels: Nagasaki