I went to Sumo over the weekend with some classmates. It was the last day of the Kyushu Bassho and we had to get there EARLY to get tickets. These are some of them in line in the cold at 7AM: 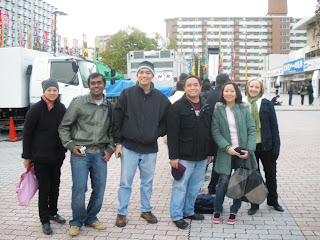 Sumo tournaments last for 15 days and are held 6 times per year (they follow a circuit around Japan). It can be a bit boring if you get there early because it takes about 10 hours from the gates opening to the final bout between the top wrestlers. One positive of getting there early when the low-ranked sumo are fighting though is that nobody is around and you can get really close to the ring even if (like me) you bought cheap seats in the nose bleed section: 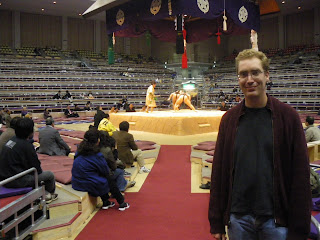 It can be a bit tricky asking sumo to take a picture with you. You have to pick the right moment. Asking a guy who is about to go into the ring and is totally focused on that is going to get you a gruff refusal or just plain ignored. But after they have wrestled and are wandering around in their kimono they are a bit more receptive, like this guy: 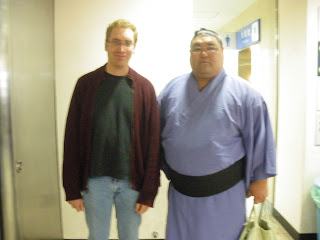 My new camera is pretty good at taking action shots (and I got the zoom too): 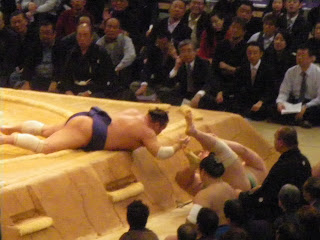 This is Hakuho, who currently holds the rank of Yokozuna, which is the highest in the sport (a maximum of two people can hold that rank at any given time). He is surrounded by bannerman carrying what are basically ads for the sponsors of his bout: 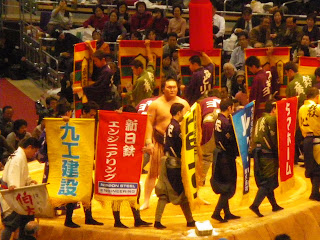 These bannermen are an interesting part of Sumo. You don't see them at all in about 95% of the bouts because there just isn't enough interest in them for companies to sponsor them. But in bouts involving top ranked guys or popular guys you will see them. Basically the number of bannermen a sumo can attract is a good indicator of how popular he is. In this bout Hakuho had a large number of them, which in itself was enough to elicit cheers of approval from the crowd. There is also a monetary incentive for the sumo, as each of the companies has to contribute money to the prize that will be given to the sumo who wins that particular bout. The more bannerman, the bigger the pot. This also gives an opportunity for lower ranked sumo who just so happen to be fighting a top ranked guy the chance to hit the jackpot, as they'll be able to collect all the money if they win.

The day ended with quite a bit of excitement. Hakuho and Ama, who is an up and coming wrestler, ended the tournament tied each with a record of 13-2. So they had to have a tie-breaker, which go the crowd really excited. This is a picture of Hakuho and Ama going through the customary warm ups/psyche-outs as they prepared to face each other: 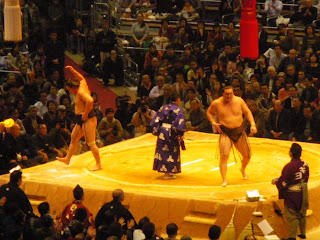 In the end Hakuho defeated Ama in a very closely fought contest, which was a bit of an anti-climax as Ama was the underdog most people seemed to be rooting for. Nonetheless it was a nice way to finish off the tournament.
Posted by Sean at 5:30 AM

Email ThisBlogThis!Share to TwitterShare to FacebookShare to Pinterest
Labels: Sumo