The weather wasn't too bad yesterday - warm and hazy but with no rain. So we decided to head over to Shikanoshima island with a picnic.

We've been to Shikanoshima a lot of times before but yesterday we decided to take a ride along a coastal road that does a full circle around the entire island. 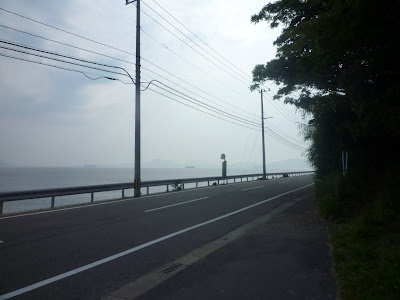 From a cyclist's point of view, Shikanoshima isn't as pleasant as Nokonoshima, the other big island in Hakata bay. This is mainly because Shikanoshima is connected to the mainland by a spit of land and a bridge while Nokonoshima can only be accessed by ferry. This means that on Nokonoshima there is virtually no vehicular traffic. So on Nokonoshima you don't have to be constantly looking over your shoulder while riding on the roads and (more importantly) the roads themselves are rather quaint country roads that blend in well with the scenery.

Shikanoshima's roads on the other hand get a fair amount of vehicular traffic on the weekends. This in turn has invited a lot of unsightly "improvements" such as massive concrete retaining walls that mar a lot of the island's natural beauty. These "improvements" did not, unfortunately, include a paved shoulder so we had to battle it out with traffic. Fortunately the speed limit is 40km/h and the traffic goes quite slow, so it wasn't particularly stressful.

That said, the road does offer a lot of really great views of both the open sea (north and east) and Hakata Bay (south and west). 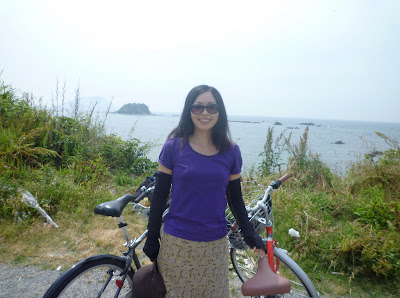 We got off the busy road at the northern part of the island to do a little walking along the beaches up there: 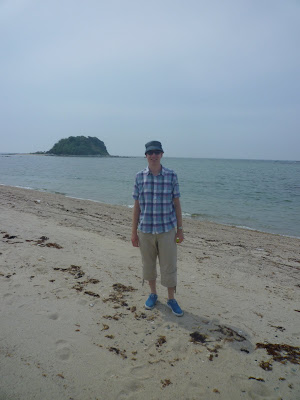 After coming around a corner we discovered what all the traffic was there for: the obligatory big beach resort hotel:

The beach was pretty crowded but quite nice (and of course you don't need to be staying at the hotel to enjoy it). We spent an hour or so just enjoying the view and relaxing there: 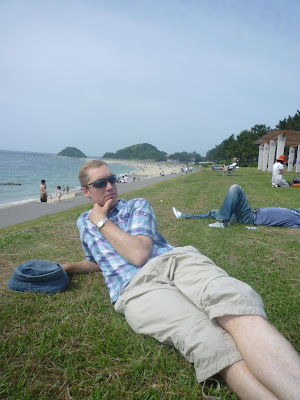 I walked further along the coast away from the beach and came across some nice rocky coastline: 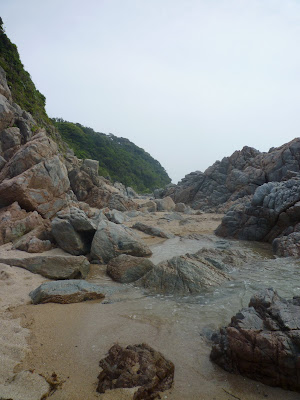 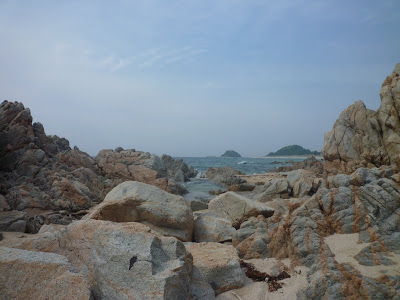 The water was quite clear: 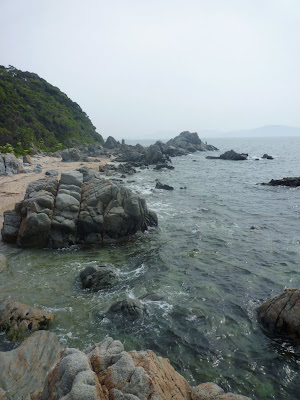 After that we continued on our loop around the island, stopping to take some pictures here and there: 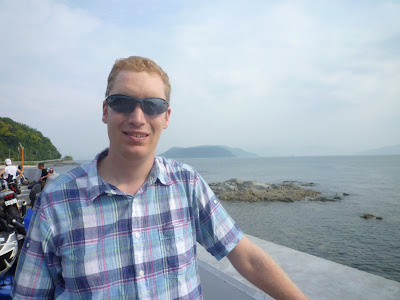 There is an interesting park that we went past. We didn't feel like climbing up, but I took a picture of Ena in front of it: 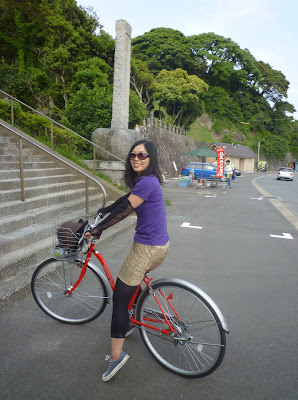 This is the Kin'in park, which commemorates Shikanoshima's main claim to fame in Japanese history. In 1784 a peasant was breaking some ground on the site of the present park and discovered a gold seal. The seal had some writing on it indicating it had been a gift from the Han dynasty to an ancient ruler in the Japanese archipelago almost 2000 years ago. This is several centuries before the beginning of recorded Japanese history (they didn't get their writing system until about 1500 years ago) and is the earliest evidence of a Japanese political entity that was organized and strong enough to have some sort of relations with mainland China.

Anyway, shortly after that we completed our loop of the island and went home!
Posted by Sean at 6:39 PM