On the weekend I went with 11 of my classmates to Tokyo to participate in the 7th Intercollegiate Negotiation Competition. We had a great time, but it was a pretty busy time. 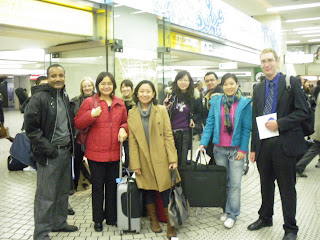 Above is a picture of us at Shinjuku station. We realized once we got off the plane that none of us really knew how to get to our Ryokan from the airport, except that someone remembered being told it was near Shinjuku, which turned out to be incorrect. So we spent a good while navigating the subways before finally arriving. 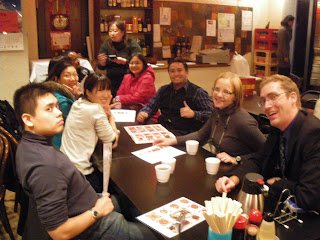 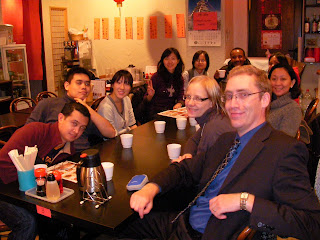 This is us on the first night having dinner (at about 11PM) at a Chinese restaurant near our Ryokan. It was pretty good, I had some beef set filled with mushrooms (that I did not eat as is my custom). Everyone had a good time. 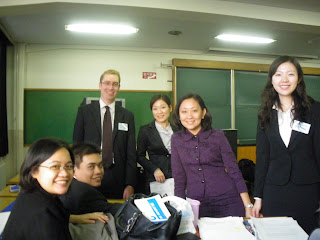 These are the members of my team on saturday morning just before we went in for a gruelling 4 hours of arbitration(from left: Celeste, Brian, me, Jin, Ava and Zhong). We faced off against the Australian National University Team, who won the competition last year. The arbitration involved each side arguing an international contractual dispute between two fictional film companies using the UNIDROIT principles. It was a hard-fought battle, but I think both teams did quite well. 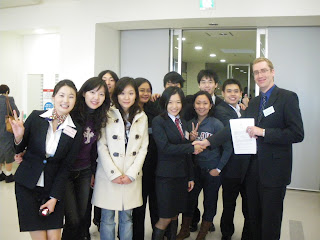 The next day we had the Negotiation round in which we faced the Osaka University team. In this one each team represented a different company (Red and Blue) and we had to negotiate a contract to produce a film together. Negotiations lasted for about 2 and a half hours. This is a picture taken afterwards with both teams. I was the vice president of Blue Corporation, which was a pretty cool gig. I'm shaking hands with Oyun, the vice president of Red Corporation, while holding up the contract we were able to conclude. The Osaka team was pretty cool, they gave us some sweets as omiyage, which was nice. 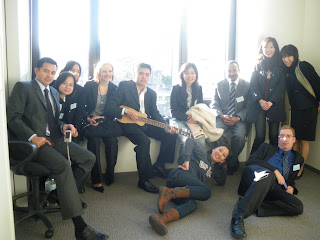 After the end of the last round, the members of both Kyushu teams collapsed in exhaustion while Brian sang the blues. (From left: William, Tingting, Celeste, Onerva, Brian, Jin, Ava, Destaw, Zhong, me, Mikako. Don-don took the picture).

All in all this was an awesome experience and I got to make some great friends so it was all good (even though Tokyo University won the bloody thing!)
Posted by Sean at 2:40 AM