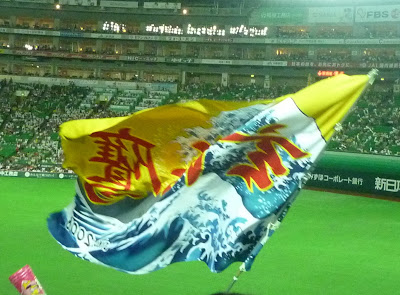 Ena and I went to another Hawks game last night and got to watch them beat the Orix Buffaloes!

The Hawks jumped on the board real early before another sell-out crowd. In the bottom of the first inning they quickly loaded the bases with one out, bringing their top power hitter, Tamura, to the plate. He promptly blasted a pitch into the left field bleachers to put the Hawks ahead 4-0. The crowd in right field went absolutely crazy, we were banging our plastic bats together like crazy, screaming and jumping up and down like there was no tomorrow. It looked like the Hawks would cruise to an easy victory.

In actual fact though it turned out to be a close game, with the Hawks only adding one more run and barely squeaking out a 5-4 victory after the closer Mahara nearly blew the lead in the 9th. We were really happy and relieved when they got the final out: 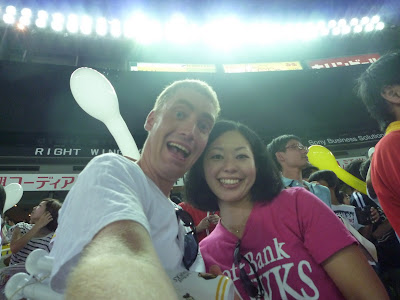 The rest of the crowd in right field was pretty happy too: 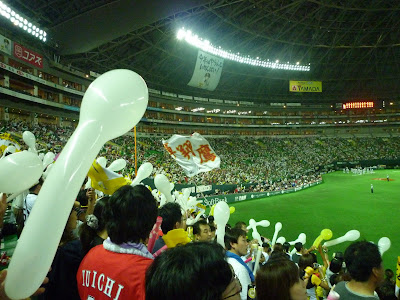 We had a great time, it was Ena's first time to see the Hawks win and we got to stick around for the fireworks after the game. I took a video of the post-game celebratory fireworks that you can see here. Actually, probably more interesting than the fireworks themselves is the sight of the Stadium with the lights turned down.

I kind of liked this T-shirt that I saw in the Hawks souvenir shop, I'm not sure what it means exactly. I swore I wouldn't turn "Blog of Sean" into one of those sites filled with stupid "hey, look at how bad the English in Japan is" pictures, but screw it, here ya go: 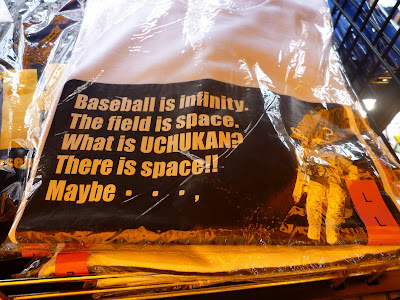 With that win combined with a Seibu Lions loss the Hawks are now just 0.5 games out of first place. If they repeat that today the Hawks will be in first!
Posted by Sean at 9:46 PM