It is only as I sit here typing up this blog that I realize that on all three days of our Miyazaki trip the main "site" that we went to was a shinto shrine. A lot of tourists who visit Japan complain of "shrine burnout" where they get dragged around Kyoto for days on end seeing nothing but shrines and temples that come to look increasingly alike the more one sees of them. In Miyazaki though its quite different as the shrines at Aoshima and Udo Jingu we visited on days one and two were more like adjuncts to the nice beaches and lovely coastal scenery in which they were set rather than sites in their own right.

On the last day of our trip we decided to stay in the city. Our bus back to Fukuoka left at 4PM and, now wise to the realities of Miyazaki transport, we decided not to risk getting stranded out in the countryside waiting for a train or bus that only ran 3 or 4 times a day while our ride back to Fukuoka was leaving us behind.

So we decided to head over to Miyazaki shrine, which unlike Aoshima and Udo Jingu is a shrine that you go to see for the shrine itself. It is dedicated to one of Japan's mythical ancient emperors and is laid out more like a palace than a shrine.

Despite its grandiose stylings, the somewhat "small city" reality of the present day shrine is given away by the presence of large numbers of roosters wandering freely around near the shrine entrance: 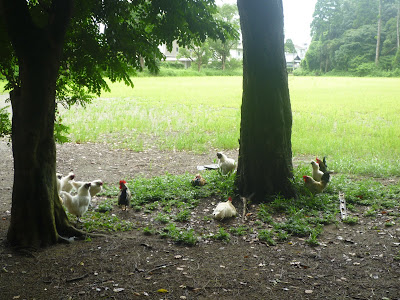 I have no idea what these birds were doing there, some of them were to be found wandering the street leading from the train station too. They definitely added to the atmosphere of the place though.

We followed a path through the woods (the shrine is surrounded by a forested park) which took us by these two guys: 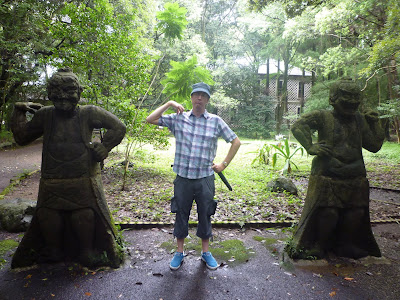 Whatever religious purposes these statues may have once served has likely long since been surpassed by their current role as a place for idiot tourists to take gag photos of themselves.

The path eventually took us to the shrine. There is a long avenue leading up to the main buildings: 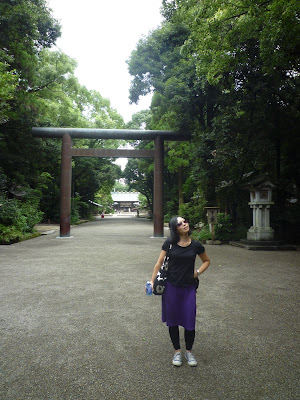 The entrance is quite impressive: 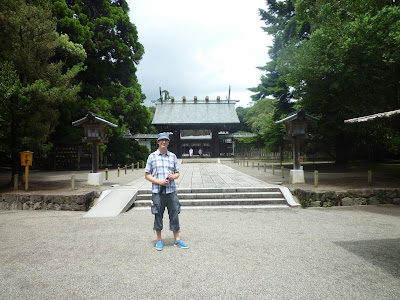 It is one of those shrines done entirely in "earth tones" without the bright orange that is used on most shrines (like Aoshima and Udo Jingu).

This is where our luck with the weather finally gave out. It was raining off and on all three days of our trip, but by good fortune on days 1 and 2 it had always rained while we were doing something indoors (riding a bus, eating lunch, etc) and had cleared up when we were outside. But at the Miyazaki shrine it started to poor rain and we were forced to take refuge under the roof of this structure: 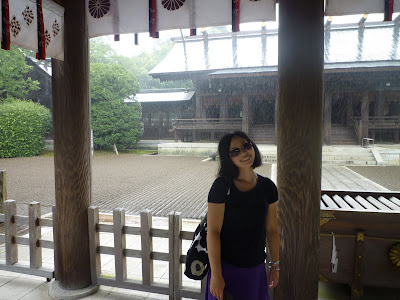 This was actually really cool though. Because it was raining (and a Monday) nobody else was visiting the shrine. So we pretty much had the whole place to ourselves. The structure we took refuge under was in the centre of the shrine (its where people make offerings to the gods) so we had a really attractive setting to wait out the rain. 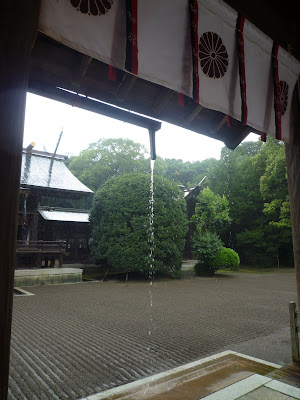 Unfortunately this turned out to be more than a passing shower and we eventually decided to leave the shrine. The Miyazaki Prefectural museum of nature and history was located in the same park as the shrine so we decided to head over there as we suddenly found ourselves in need of an indoor activity.

This also turned out to be lucky, as it is actually a really good museum. The walk from the shrine took us to the outdoor part of the museum, where they have a few thatched-roof farmhouses they had brought from various parts of the prefecture and rebuilt into an open air museum: 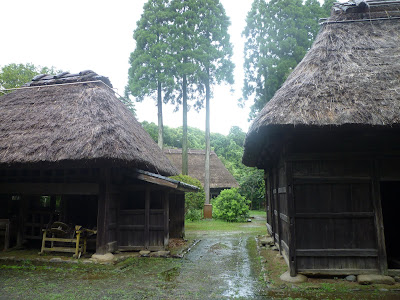 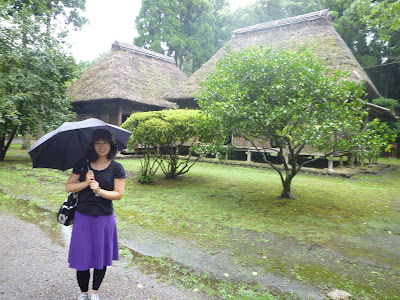 As with the shrine we had the place all to ourselves and decided to temporarily take shelter in one of them: 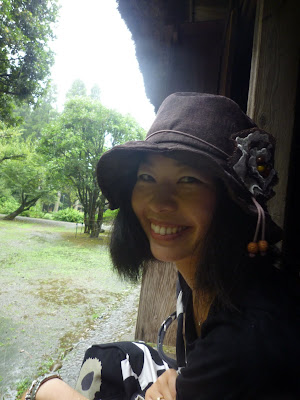 After that we went straight into the main museum building. Going in I was a little wary that this would be some small-town museum that took five minutes to go through, but in fact it is a really quality museum that has excellent exhibits that compare well with any museum I've ever been to.

The first floor was the nature museum, the highlight of which was probably the dinosaur display: 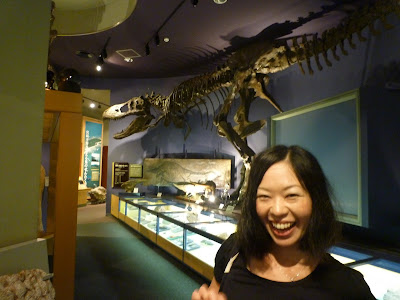 The second floor dealt with history and had exhibits tracing Miyazaki's history from paleolithic times to the present. It was a great way to spend a couple hours on a rainy day.

After the museum it was time to head back to Miyazaki station to catch our bus: 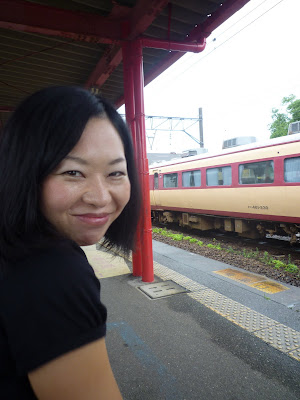 All in all, Miyazaki was a great place to visit. The only hiccup was the public transit, though with better planning we could have gotten around that (so if anyone reading this is planning on visiting Miyazaki, check the bus and train schedules in advance!!) and at any rate it didn't have much of an affect on our enjoyment of the trip!

Another point that I should make is that, surprisingly, every single place we visited in Miyazaki - Aoshima, Udo Jingu, Miyazaki shrine and the prefectural museum - had free admission. About a year or so ago I wrote a big rant on here about how poorly Victoria compares to Japan in that regard and my trip to Miyazaki really reinforces that view. If any one of these sites was in Victoria you'd probably have to pay 15 to 20 dollars to get in and as a result locals would never visit and only well-to-do tourists would be willing to make the splurge. Free admission (or admission at a reasonable rate of 4 or 5 dollars) in most of the big attractions in Japan (theme parks are an exception) really enables normal people on shoe string budgets to do more travelling secure in the knowledge that they won't be forced to shell out tons of cash on admission to sites of sometimes dubious merit (yes, Victoria Miniature World, that barb was directed at you).

So, Miyazaki prefecture, my hat is off to you!
Posted by Sean at 6:52 PM

Email ThisBlogThis!Share to TwitterShare to FacebookShare to Pinterest
Labels: Miyazaki