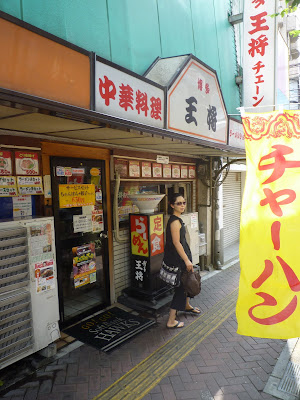 Ena and I have been taking it easy for the past couple of days, its just too hot to ride our bikes or go anywhere.

So yesterday we just kind of moped around nearby Kashii. We ended up having lunch at a place called Oushou (王将) which is a fast food chain restaurant that specializes in noodles and gyouza and Chinese-style dishes.

There was an Oushou in Himeji near where we worked from 2001-2003 and I used to have lunch there sometimes. Its a nation-wide chain, but (apart from the menu) its got a lot of unusual quirks for a franchise restaurant.

The main one is the physical appearance of the restaurants. With McDonald's or most other fast food chains they pretty much all look alike. The interior of a McDonald's in Fukuoka looks exactly the same as the interior of one in Canada.

Now, I eat at McDonalds sometimes and find this sort of standardization useful because no matter which McDonald's you go to you know exactly what they've got and how much it'll cost. In terms of the restaurant's physical appearance though I agree with those who say that this sort of sterile cultural homogeneity is objectionable. McDonald's is really just spreading bland ugliness across the planet.

So I kind of like Oushou from this perspective. A lot of Oushou restaurants have the same problem of McDonald's - bland, uniform plastic decor in a cheaply constructed building surrounded by a huge parking lot. I never go to that type of Oushou. 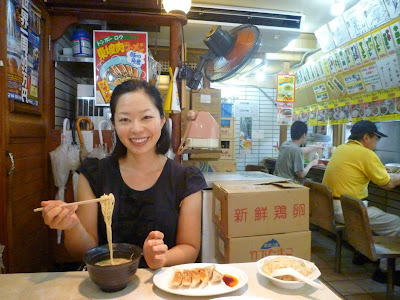 I love it! This place is great! Its an absolute mess! Boxes are stacked everywhere, the furniture is mismatched, there is a ROTARY DIAL pay phone just behind Ena (the pink one just to the right of her head), they've got a bunch of mixed up posters and photos tacked up to the wall, discarded umbrellas hanging wherever they could find a place to keep them, beat up Fukuoka Hawks goods scattered about, ancient wood paneling that was probably installed in the early 70s along the top of only SOME of the walls!! Its just a treasure trove of bad taste and indifference - exactly what a place like this should be!

Some people might say this place looks awful but I say its perfect. Nobody gives a shit what it looks like. That means they don't have people from Oushou's head office coming down to measure every square inch of the place to ensure that the Franchisee isn't doing anything to even slightly deviate from the standard pattern they enforce on everyone. I'm sure McDonald's (I shouldn't be singling them out, its really every fast food franchise) does this all the time. But not Oushou - if they did the head office guy's head would probably explode the second he walked into the Kashii Oushou!

The food isn't bad either - actually Kashii Oushou is a pretty famous spot locally and among the crap they've got on the walls are tons of pictures and autographs of Hawks baseball players who have eaten there, along with some newspaper articles about the place. We had ramen, gyouza and fried rice: 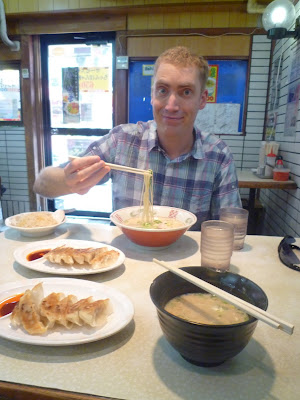 Look at that fake wood paneling above my head!! Isn't it great? My parents used that exact same type of paneling in about 1977 in a room they used to raise sheepdogs in!! That is how shitty that paneling is! And here we are: 2010 and its in the greatest restaurant in the world!

Well, I exaggerate a bit, but still - I love Kashii Oushou.

The other cool thing about visiting Kashii Oushou is that afterwards we popped into a little grocery store to buy some bottled drinks and I found some melon soda! 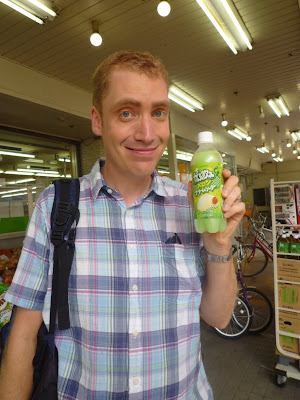 Melon soda is on the menu at most fast food restaurants here and I've taken to drinking almost nothing but when we dine in one. But I've never found it in a grocery store until yesterday. I was so excited we had to take the above photo to memorialize the occasion. Actually, just looking at it, I think I might have missed my calling - I would have made a pretty good pitchman for melon soda.
Posted by Sean at 8:01 PM

Email ThisBlogThis!Share to TwitterShare to FacebookShare to Pinterest
Labels: Kashii