On day 2 of our Miyazaki trip we decided to head down the coast to Udo Jingu, a famous shrine out in the middle of nowhere overlooking the sea.

We were pretty excited to go down there because the bus ride would take us along this coastal highway that was reputed to have some fantastic views. One tiny failure in our trip planning though was that we failed to consider the fact that Miyazaki is a much less populated prefecture than Fukuoka, which means that public transportation is infrequent and inconvenient. We ended up just missing the bus that we intended to take which meant that we had to kill a ton of time in town until 12:45PM to catch the next one. We sort of realized that we have been spoiled by Fukuoka's trains and buses which run every 10 or 15 minutes from sun up to midnight.

Nonetheless once we got on our way things were looking good. Until the rain hit. While we were going through the Hori Kiri pass (one of the best viewpoints along the coast) we hit a major rain storm: 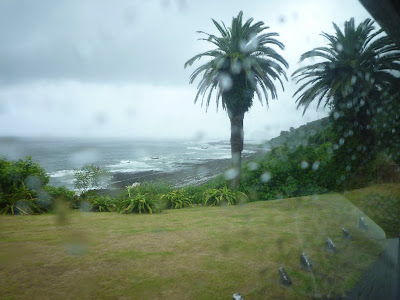 We were really worried as we didn't have umbrellas, but luck was with us as by the time we arrived at our destination the rain clouds had moved on and it was sunny again.

The ride took about an hour and a half and once we got out of the suburbs the views were quite nice. The bus actually dropped us off in a little village a couple of kilometres from the shrine. We walked along a coastal road from there which offered some nice views of the washboard rocks: 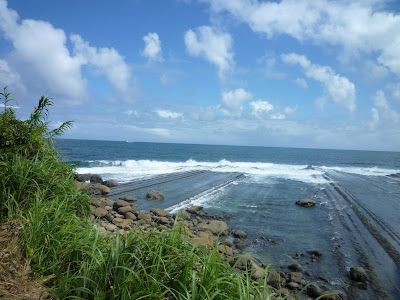 Eventually we arrived at the Udo Jingu ("Jingu" means shrine). It is without a doubt the most beautifully located shrine I have ever been to. Actually I would say that the shrine and its surroundings are together the most beautiful site I've been to in Japan. The walk from the entrance to the main shrine takes you along some fantastic coastal scenery: 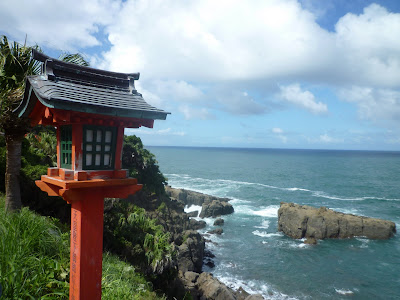 The clash of colors provided by the green palm trees, the blue sea and sky and the orange shrine features is really amazing: 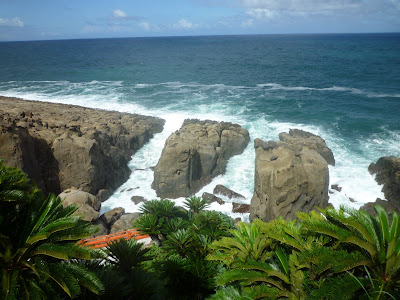 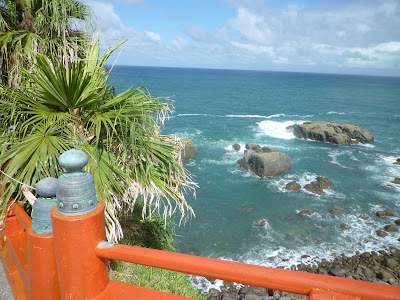 And of course throw in a cute couple (well, a cute girl and her gangly husband) and the scenery takes on a whole new look: 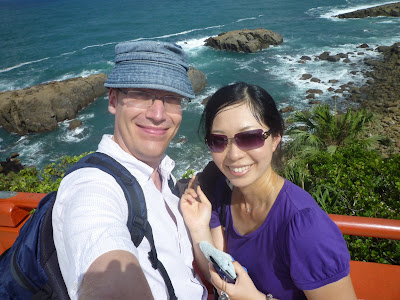 There are a few small shrine buildings stretched out along the path leading up to the main one: 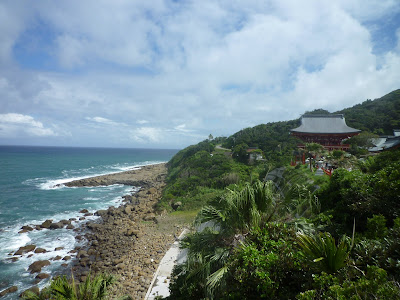 To get to the main building you have to go down some stairs going down a cliff face: 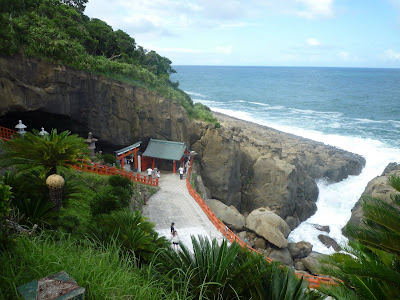 The main hall itself is not large but is quite beautiful - not so much for the building itself but by virtue of its being snuggly fit inside a little cave: 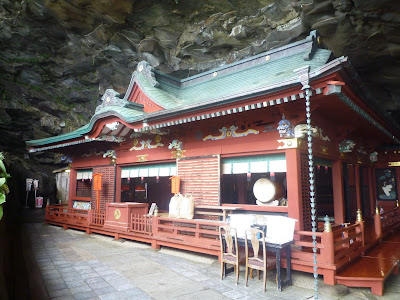 It is definitely the most interesting location for a shrine I have ever seen.

You can walk around a bit, the cave isn't very large but they managed to squeeze a little pathway behind the shrine building: 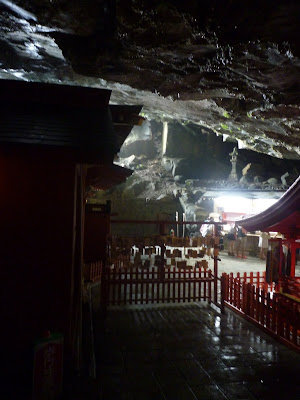 After moseying around the cave a bit we went and bought these little clay pebbles: 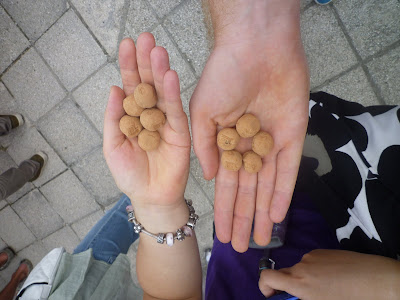 You are supposed to throw them at this rock jutting out of the sea below and, if you get them into this one spot you'll have good luck (at something, I've forgotten what deities this shrine is dedicated to): 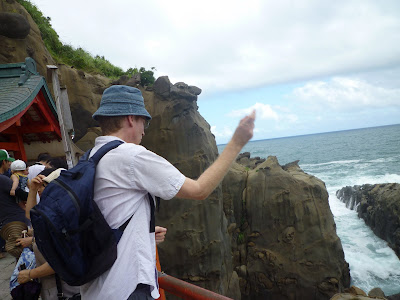 We were both able to hit the rock but our clay pebbles bounced off into the sea. I'm not sure if you had to get them to stay on the rock for it to count or not.

After spending a pleasant while exploring the shrine and enjoying the views we once again got screwed over by the quirks of Miyazaki's public transport system and our own lack of advanced planning. The last bus back to town left at 4:20PM (the town of Fukei, where the bus stop was, looked like it had a population of only three or four hundred), which meant that we had to start walking back to the bus stop after only spending a little over an hour at the shrine.

Instead of returning by the coastal road we walked up a set of 800 steps that took us up and over the hill behind the shrine: 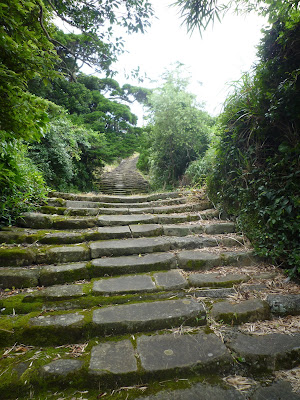 Technically this is the way we were supposed to have entered the shrine rather than the coastal road we took. The stairs actually provide a shortcut.

At the top of the hill we paused to enjoy a nice view of the mountain scenery: 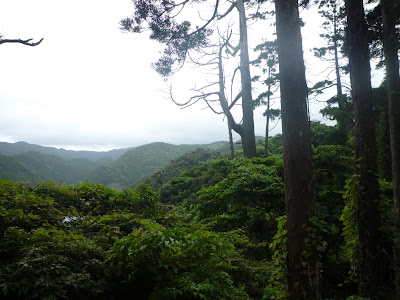 A 20 minute walk later we were back at the bus stop waiting for our return ride back to town.

Back in town we had dinner at a nice little restaurant and retired to our hotel room to watch some TV and rest our feet!
Posted by Sean at 5:46 PM

Email ThisBlogThis!Share to TwitterShare to FacebookShare to Pinterest
Labels: Miyazaki