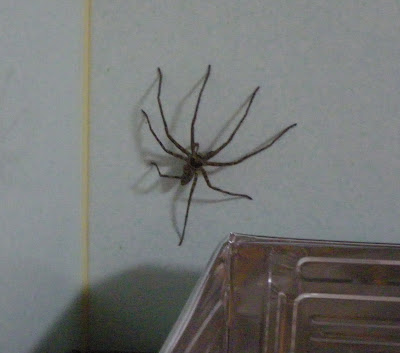 This is my new spider story.

If you were to ask me the exact moment I lost my enthusiasm for living in a cute little place nestled in a wooded hillside surrounded by the calls of nature I would say "September 9, 2009 at approximately 9:34 PM".

At that moment I was calmly washing the dishes in our new apartment when suddenly this massive dark blur shoots out from behind the microwave and onto the wall behind the sink directly in front of me. It was this HUGE spider. This picture doesn't quite capture its size. Basically it was roughly the size of my hand with the fingers completely outstretched. Definitely big enough to completely cover my face if it chose to jump on it.

Ena was preparing a bath and asked "What is the matter?"

Not quite understanding my meaning Ena came to have a look for herself.

We stood there frozen in terror looking at the giant spider on the wall. My hands were covered with soap suds and I had a spoon I had been washing in my hand.

I slowly approached the sink making the universal sign for "Don't you f@#king go jumping on my face" and gently placed the spoon on the edge.

"What should we do?" Ena asked.

"Wait here, I gotta go get something." I replied.

"Don't you be leaving me here with this thing while you go get the camera, this is serious." She said. She knows me too well.

"I'll just be a second, let me know if it goes anywhere" I said and abandoned my wife with a giant spider in order to go get the camera.

Returning I took a few snaps of the thing as it slowly moved along the wall.

Giving the camera to Ena I said "here, use the movie mode and film me trying to kill this thing. It'll be awesome."

She looked at me like I was insane so I dropped the idea. YouTube users will have to look elsewhere for entertainment tonight.

Retiring to the front foyer I picked up one of my sneakers to use as a weapon. When I got back to the kitchen the spider was in a corner, making it very difficult to get a clean shot.

After a standoff that lasted a couple of minutes the spider made a move. I struck.

Eventually the spider landed in the sink, which it had some difficulty getting traction on and could not climb out of.

"Big mistake, pal" I said with a cocky grin and nonchalantly flipped on the faucet, intending to drown the spider.

Perhaps the adrenaline was affecting my brain because of course the water just immediately started going down the drain without posing even the remotest threat of drowning to the spider.

It was at that moment that I discovered that this was a spider that had the ability to JUMP, which it demonstrated for me by starting to jump like crazy around the sink.

It was at that moment that I just started blindly smashing my sneaker at random into the sink - not really caring how many dishes I smashed - until eventually one of my blows landed clean and true. The spider was no more.
Posted by Sean at 6:20 AM