We began the second day of our trip early, having breakfast at the hotel and then heading off to explore the southern part of the island. The weather was a bit cloudy, but still warm and the forecast didn't call for any rain. Our intention was to stick to the coastal road and follow the southern coast all the way to the eastern part of the island, which is where some of the best beaches in Japan are reputed to be (and which are the island's main draw in the summer).

Once again our journey took us through some really lovely countryside: 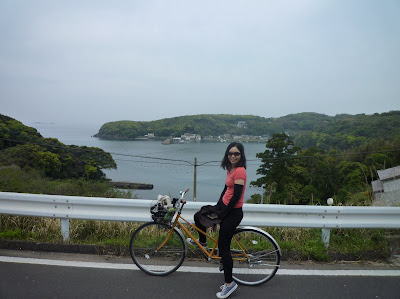 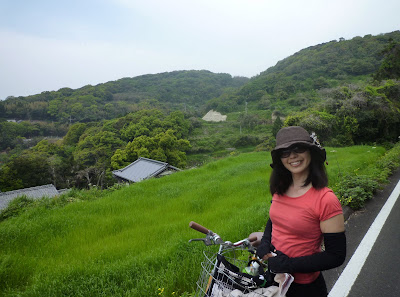 We came across a number of small cattle farms. These black cows are another thing the island is noted for: 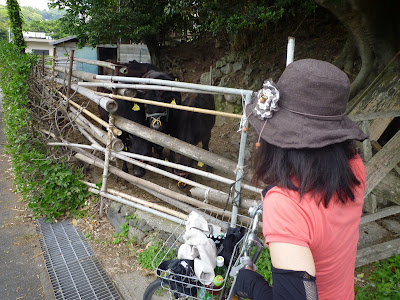 Country roads in Japan often have makeshift wood stands where locals sell their produce. These operate under the honor system and you just drop the money in a box. We bought a bag of oranges from one for 100 yen and stopped at "dolphin nose", a prominent cape (shaped like a dolphin nose) with a lighthouse on it, to eat them: 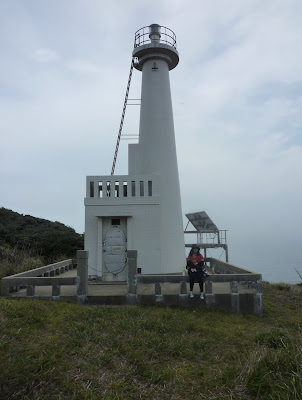 We then swung down to the small fishing village of Haze, which has some really nice cliffs and spectacular views of the coastline: 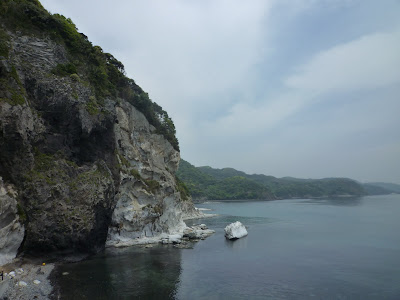 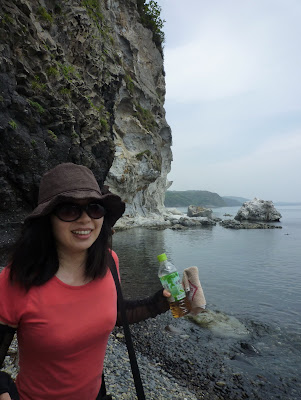 After that our plan to make it all the way to the beaches on the eastern side of the islands kind of came off the rails. We didn't realize it when we started out but after leaving Haze the coastal road we were on turned into an uphill stretch for a few kilometres that basically took us from sea level to the highest point on the island. In addition to leaving us completely exhausted (we walked our bikes up most of the way), this also ate into a lot of our time. Once again I found myself cursing the Lonely Planet guide and wondering if its authors had ever even been to this island. Mindful of our need to catch the last ferry back to Fukuoka at 5:45PM, when we reached a fork in the road near the highest elevation, we decided to take the one that led us back to town instead of trying to force our way to the beaches.

This area had some nice views too, which we were able to appreciate after taking a little rest: 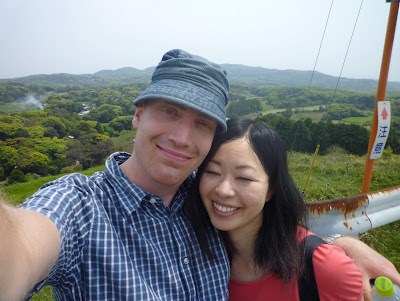 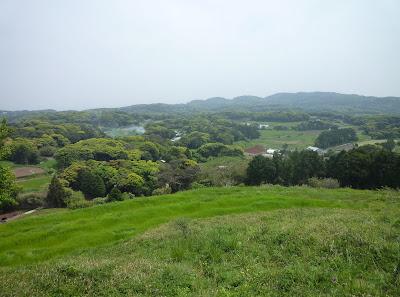 There was a little viewpoint at the official "highest point" on the island, which also offered some good views: 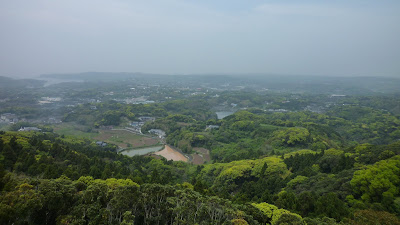 On the way down we passed by the Matsuo Kofun, an ancient burial mound more than 1500 years old. There are more than 200 of these burial mounds on the island, an indication of its importance in ancient times when Kyushu was the centre of Japanese civilization. It kind of reminds me of something out of the Shire in the Lord of the Rings: 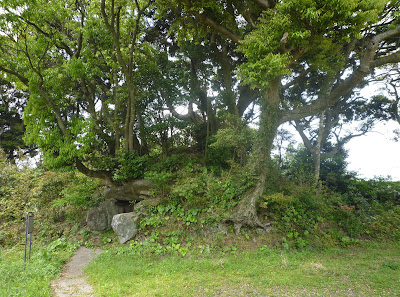 Remembering her experience at the Kurozaki gun battery, Ena refused to enter the kofun with me: 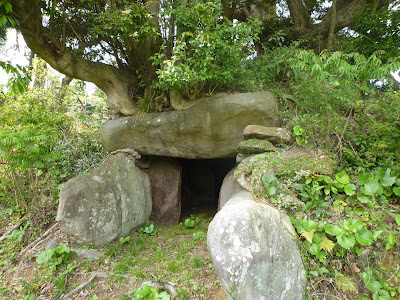 After that we were back in town. We ended up with some time to spare before the ferry left so we wandered around a bit. The town had an almost deserted feel to it, I'm not sure if its always like that. We stopped at this souvenir shop to buy some stuff: 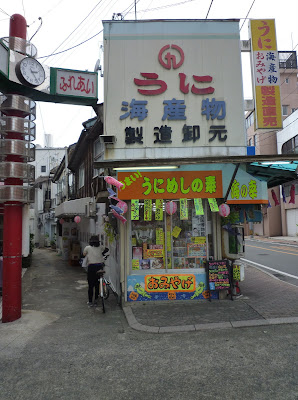 After that we got to talking about how nice it would be to settle down in a pleasant, sleepy town like this. Surrounded by pretty nature and the laid back lifestyle, it would be fun to run your own business or something. We came up with this great idea to open a girl bar with a really flamboyant, flashy exterior and give it some outlandish name like "Bitch". We got really excited about this and were starting to jot some preliminary plans down on paper when we discovered that someone had already beaten us to it: 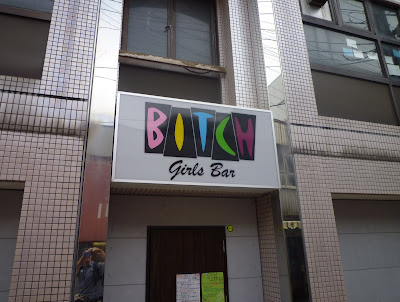 So our hopes were kind of dashed, but we'll try to find something else to do.

We had a bite to eat at a cafe with a less colorful name and then headed over towards the ferry terminal, taking some last pictures in town on the way: 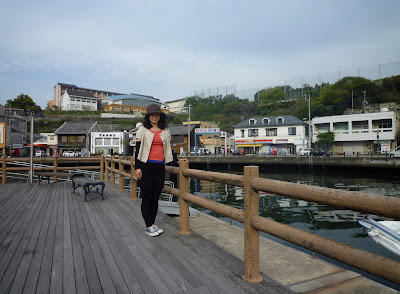 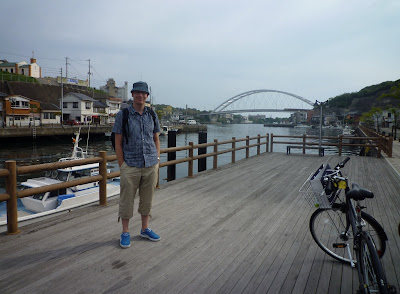 After buying our ferry tickets we stood on the pier and waited for our chariot to arrive and whisk us back to Fukuoka: On board we took a seat outside on the stern of the ship (yes, I did look that nautical term up so I wouldn't look stupid saying "the back of the ship") so we could watch the sunset: 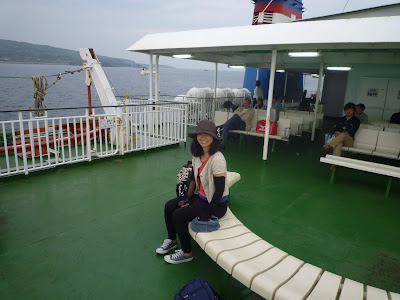 They were great seats and as the ship steamed for home we watched as Iki island slowly faded into the distance in front of the setting sun: 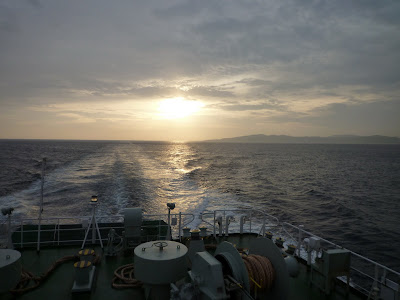 A little over two hours later the lights of Fukuoka welcomed us back and we were home again:

It was a really great trip, one of the best we have had in a long time. Hopefully we'll get to take some more on the weekends this spring and summer.
Posted by Sean at 8:39 PM

wow!! can't believe that Iki Island does really exist! And my real name is Iki :)