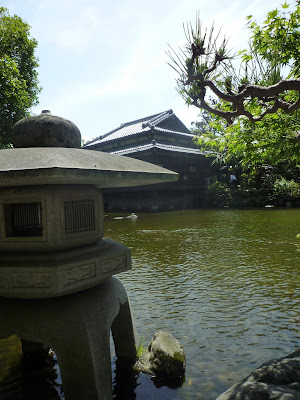 Ena and I had a sunny day off yesterday. It is a testament to how much I liked Yusentei that I decided to take Ena there, meaning that I paid to get into the same place twice in three days - quite a feat for a notorious cheapskate like myself.

Ena liked it a lot. We sat in the tea room and enjoyed the view of the garden: 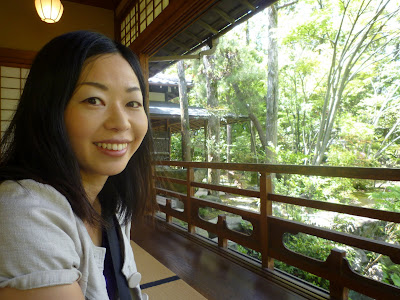 While sitting there I read a bit about the place's history. It was originally a villa built in 1754 by Tsugataka Kuroda, the feudal lord who ruled Fukuoka. He had good taste. After that we took a stroll around the garden path, passing the waterfall: 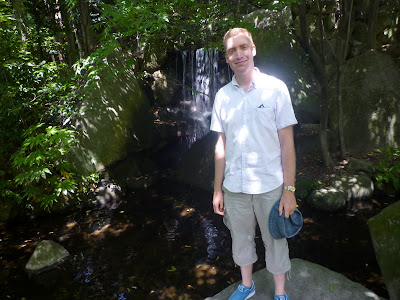 And around the pond: 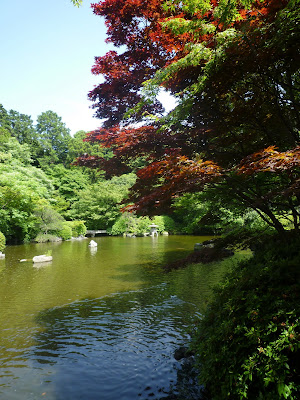 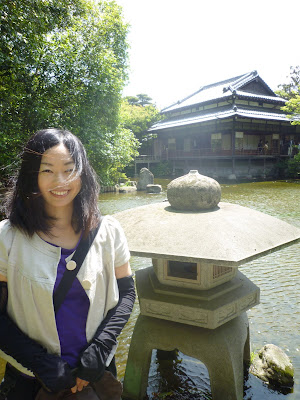 After that it was still early, we still had energy and the weather was still good. So we decided to head over to Aburayama, the tallest mountain in the city, which was pretty close to Yusentei (which I should note is on the opposite side of town from where we live).

I've long been wanting to go to Aburayama, it is quite an attractive mountain that looms over the western part of town and forms a nice backdrop to a lot of scenic places, including Ohori Koen: 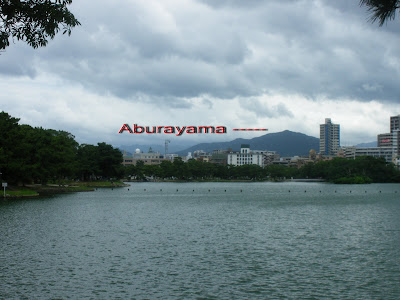 Perhaps the biggest reason I've wanted to climb it though is that we can see it on a clear day all the way from our balcony: 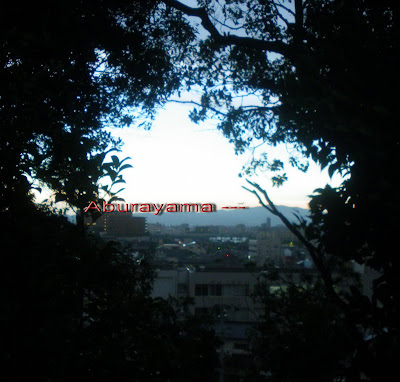 We parked our bikes near the foot of the mountain where it became too steep to keep riding them. A road let part way up the mountain and we walked along for a while until we came to a viewing platform which marked the end of the road. There were some good views from the city there: 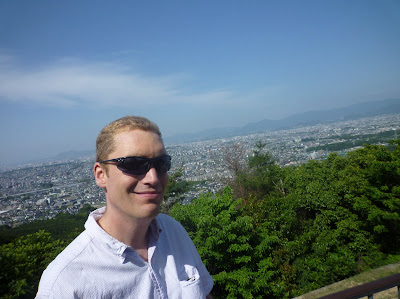 This platform was less than halfway up the mountain itself and it was still early. We met an old local man who suggested we take the hiking trail to the top of the mountain. It was about a 3km hike according to the signs and we had a lot of daylight left so we decided to take up the challenge - Fukuoka city's tallest peak (though I should mention that there are much taller mountains just outside of town)!

The climb was a nice one, though steep at points. The trail was pretty well maintained and led through some really nice forest with the occasional sunny bit: 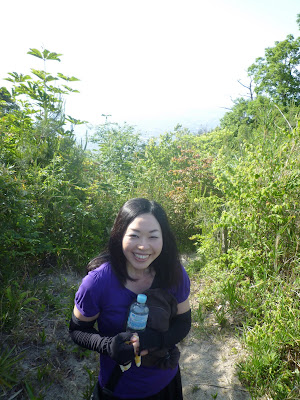 At times we could see the whole city with the islands of Hakata bay in the distance: 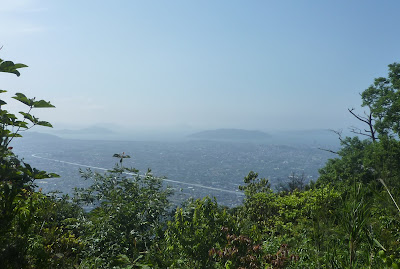 The trail didn't take us directly up Aburayama, it instead followed a ridge that first took us to the peak of another mountain, Myoukenyama (I think), 452 metres high: 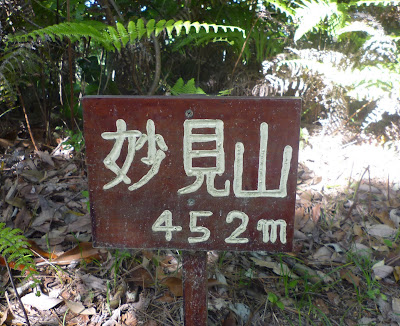 A little while later on the trail we came to Kunimi Iwa, a prominent rock. In feudal times the entire domain of the Kuroda clan (the one that built Yusentei) and the neighboring domain in Chikuzen could be viewed from this rock, so it was a well-known point on the trail. The trail itself, I should say, is also of ancient origins, having been used by Yamabushi (Buddhist mountain monks) for their religious training since time immemorial.

We decided to see how the view was, which was actually somewhat of a terrifying experience. You can't tell from these pictures but there is a sheer drop of a couple hundred metres on 3 sides of this rock, which isn't particularly large. We just went up quick enough to take these pictures and then got right back down again: 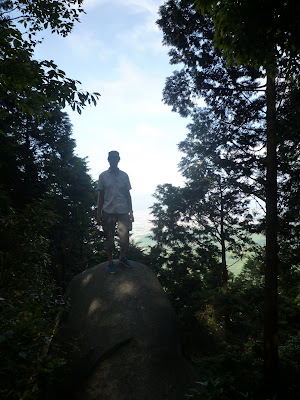 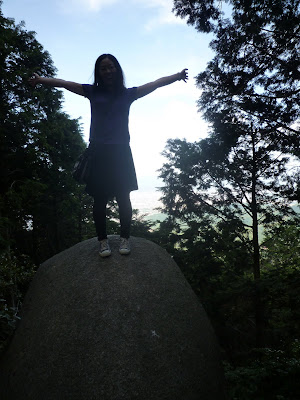 After that it was just a short hike up to the peak of Aburayama, 597 metres high: 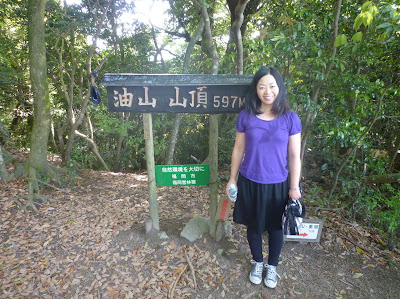 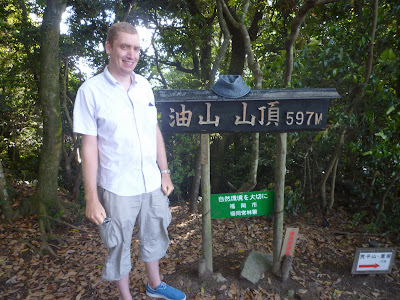 On the hike down we decided to take a different route. As we were to learn to our regret later on, this is something you should never do unless you are sure the other route will ultimately take you back to where you parked your bikes. In our case it did NOT and once we got back to the bottom of the mountain we had to add about a 45 minute walk through town to where we had left them.

Nonetheless, the we enjoyed most of the descent in blissful ignorance of the pain in the ass that awaited us at the bottom. 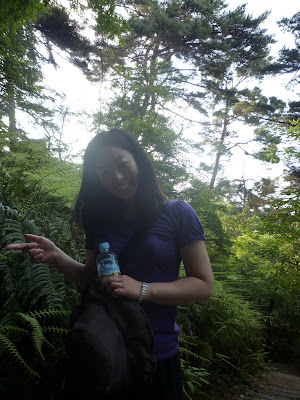 The scenery was actually better than what we had seen on the way up: 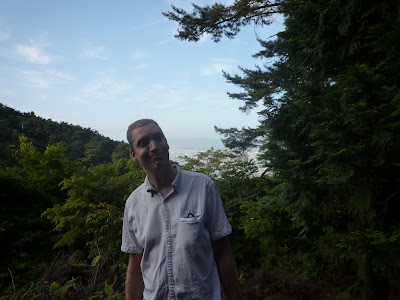 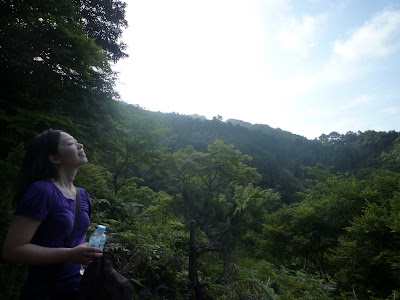 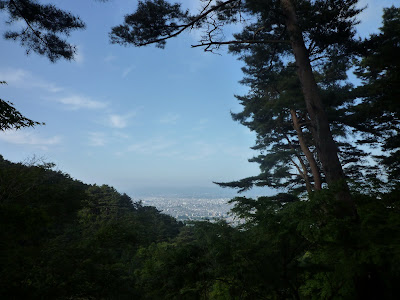 In 1978 somebody had a lot of money that they didn't know what to do with so they decided to build a suspension bridge along the trail just for us hikers: 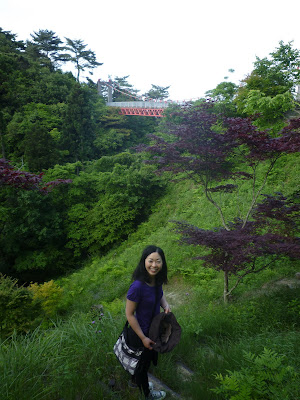 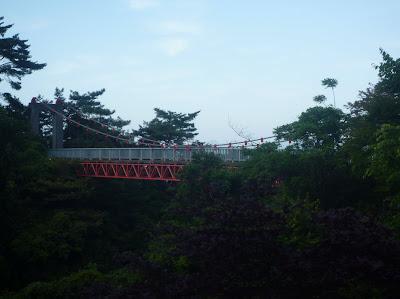 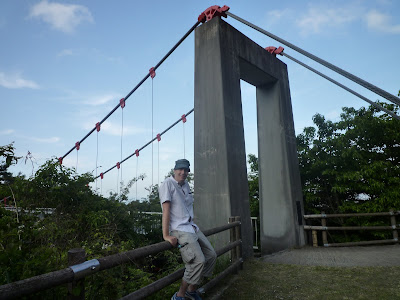 The view from the bridge up the mountain was kind of nice: 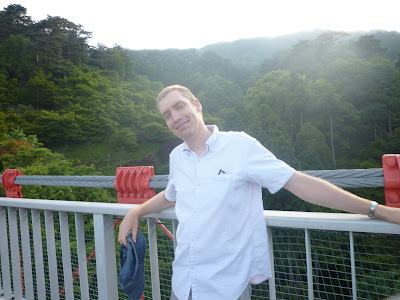 From that point it was pretty smooth sailing to the bottom of the mountain, where the quest for our bikes began. By the time we reached them it was dinner time so we pedaled back to town and had dinner at a Thai restaurant in Daimyo. All in all, a great day!
Posted by Sean at 6:02 PM