The elevated expressways of Fukuoka 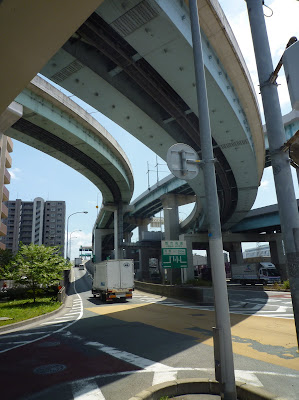 One of the more interesting features of Fukuoka's cityscape are its elevated expressways. 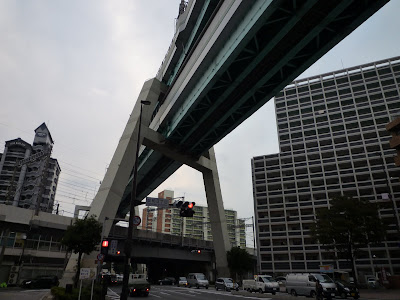 They come in a variety of designs, are often stacked on top of each other, and run into and merge with each other at varying points, creating some interesting views. 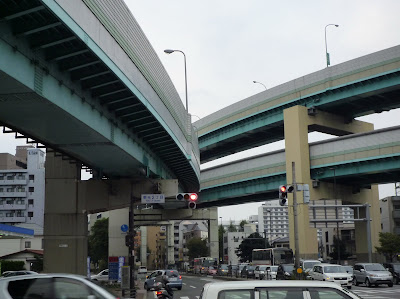 They can also frame the background scenery in a rather interesting way. This is Hakozaki shrine as seen through two levels of an expressway heading into downtown: 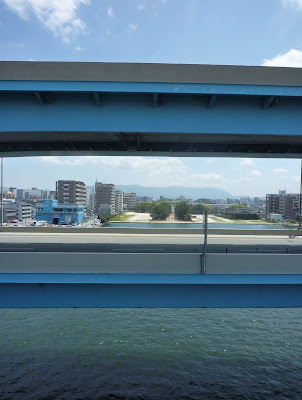 They also take traffic through some of Fukuoka's other industrial sites, like these giant oil "bubbles": 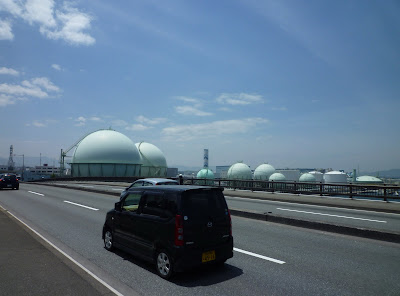 Our apartment is actually quite close to one of these expressways, maybe 100 metres away. Fortunately its on the other side of our hill so we don't hear it or have to look at it. Its fun to look at them sometimes when passing by a place where they wrap around a neighborhood or something like giant ribbons, but basically they are eyesores and most people have a "not in my backyard" attitude towards them.

That said, they are actually quite useful for cyclists. I can't ride on the expressways themselves, but they usually have roads running directly underneath them with large bicycle/pedestrian paths. Because they follow the route of the expressway they are usually quite direct and don't have a lot of intersections. Traffic is also pretty light on these roads and they often have a lot of trees planted alongside them, so they are quite convenient. 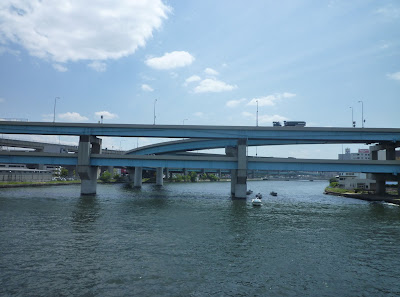 Email ThisBlogThis!Share to TwitterShare to FacebookShare to Pinterest
Labels: Fukuoka

Hi, I have been following your blog for a year or so. Excellent pictures and rants too! I actually live in Kashii, and often bike ride too.

Two years ago, I rode from Kashii to Nagasaki. I had a plan to ride around Kyushu, but maybe in the future.
Anyway, I thought you may like this website: bikely.com. You can find routes and post your recommended routes. You can see mine here:
http://www.bikely.com/maps/bike-path/Fukuoka-to-Nagasaki
It was awesome! But, I would never ride long distance in summer every again! However, I am planning my next trip to Mt Aso this July....but I haven`t planed it yet.

I wanted to ask you, how did you find such an amazing place to live?
I live in a nice apartment near Kashii station, and costs 90,000yen a month, it`s OK, but I`d like to find something like your house.
Did you go through an agent? Any advice you have would be great!

Thanks for your blog!
Matt
PS. I also have a blog, but I haven`t updated it for three years, but some stuff on Fukuoka anyway.
http://matthewwheatley.blogspot.com

Thanks for the post and thanks for turning me onto Bikely. I checked out your Nagasaki route, must have been a nice ride. A friend of mine has done the Kyushu loop down to Kagoshima and back but I've never done anything so ambitious. Good luck with Mt. Aso....in July!

We kind of lucked out with our place. We went through an agent (one of the ones on the street in front of Kashii station). We had done some research using their online listings before and had found our place advertised there. The picture in the ad had caught my eye because you could see a lot of trees surrounding the building, which I liked.

The first apartment I lived in in Japan the only window it had looked out onto this ugly building only about 2 metres away, with no trees and not much natural light. Since then I've made it a point of placing high priority on how nice the view is from the windows and how much light a place gets. Its a pain to find because its one of the things they never put in the apartment ads themselves.

The agent took us to 3 places in our price range (60-70). 2 of them were just awful - in noisy neighborhoods surrounded by asphalt with no greenery, no view and very little natural light in them. The third (the one we had chosen) was perfect and we said "we'll take it" on the spot. It was actually even a bit cheaper than the other two (same size though, 2LDK) and I was a bit worried that there was a hidden "catch" somewhere, but we've been here for almost a year now and we haven't found anything bad about the place.

I think the key to apartment hunting in Japan is to stay away from train stations. The rule seems to be the further from a station an apartment is, the less the rent (and the bigger a place you can get for the same money). Also you have a better chance of finding a place in a quiet neighborhood with a view and some nice trees further away from the station. We're probably about a 15-20 minute walk from the nearest station here, part of which is uphill, which I think made this a much cheaper place than if it had been say 5 minutes walk away.

Its kind of ridiculous really because by bike we can still get to the station in under 10 minutes so its not that inconvenient. The only drawback is that we don't have many restaurants in walking distance (a point brought home to me as I visited a friend in Daimyo yesterday who has a million places to choose from).

Nice blog by the way, I liked the dolphin rescue story! You should start it up again!