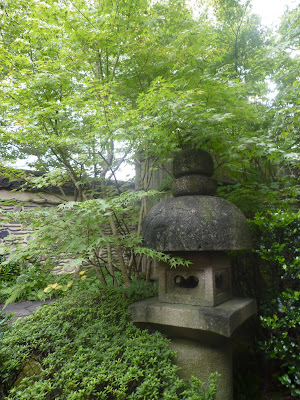 Fukuoka is not generally known as a garden city. And this is reasonable, because it isn't one. Home to one and a half million people but not a single "big" garden to be found in the whole place. This is a bit of a shame to a Japanese garden lover like myself. Even tiny Takamatsu, one-fifth the size of Fukuoka, boasts a huge garden that in my opinion puts Victoria's Butchart Gardens to shame.

What Fukuoka lacks in big gardens however it makes up for in little gardens. There are a lot of them, scattered throughout the city. I think the best one is Yusentei, the garden I liked so much on my first visit that I made the 15km bike ride back the very next day because I wanted Ena to see it too. There is also a nice little garden in Ohori Koen that I visited with my dad while we went Cherry blossom viewing last year.

Yesterday Ena and I did a little bike tour to two of Fukuoka's other little gardens that we hadn't been to yet. Our original plan was to take in three, including the one at Ohori Koen that Ena hadn't seen, but it turned out to be closed on Mondays so we only squeezed the two in.

The first one we went to was the flower garden at Hakozaki shrine, just up the road from our place. We pass by it all the time but for some reason in the two years we've been here we have never gone in.

Its a pretty small garden that you can walk through in about 15 minutes, but for the 200 yen admission its a good deal. I like the fact that they use the honor system to collect the admission fees, during the off season (ie now) nobody mans the gate soyou just put your money into the box as you enter. Its a bit of a testament to the honesty of this society that they can do this, in Canada it would never work: 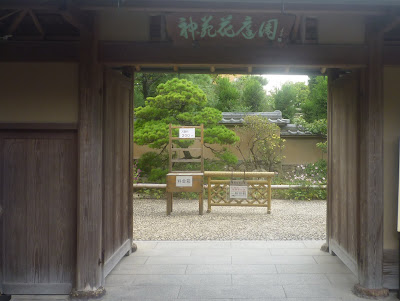 There weren't any other visitors yesterday. The garden has a number of specialty flowers that it is known for like peonies. It is really crowded when those are in bloom and virtually deserted the rest of the year. There were some colorful flowers around though: 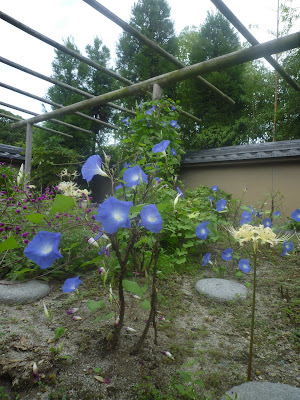 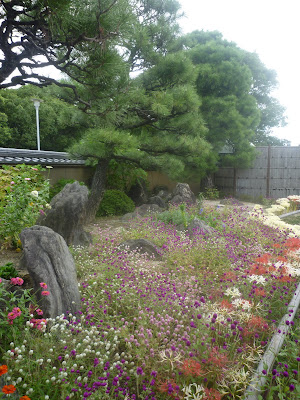 The garden also has elements of the more traditional Japanese garden look, with some nice paths covered by maple tree canopy: 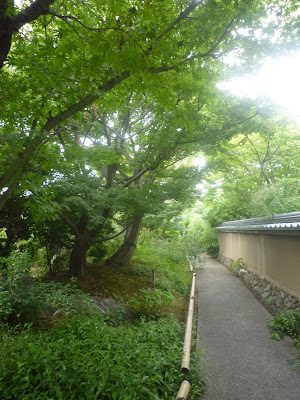 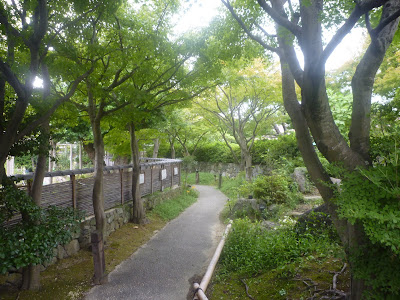 There is a restaurant in the garden which I think is their main source of revenue. We had just eaten so we didn't go in (its pretty expensive too). It overlooks the vest viewing point of the garden, which we viewed from a bench outside: 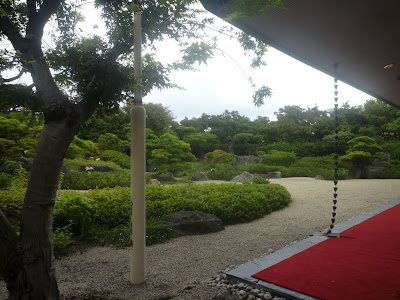 After leaving the Hakozaki flower garden we pedaled downtown to Hakata, which is where the Rakusuien is located. This is kind of a remarkable little garden, originally built as a villa in 1906 by a local merchant and rebuilt as a garden by the city in 1995. It is on a tiny, postage-stamp sized plot of land right in the middle of the busiest part of the city, surrounded on all sides by high-rises.

What I find remarkable is that despite its size and location, they've done such a good job of screening out the surrounding buildings through the use of mature trees that when you enter you feel like you might as well be in the middle of the countryside.

The garden is surrounded by a really attractive tile-topped wall: 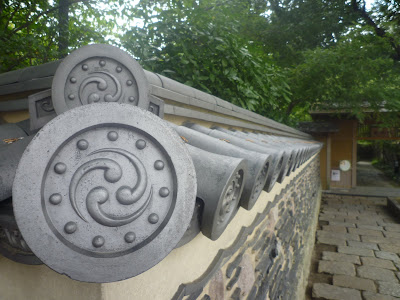 The front gate leads down a nice path into the garden lined with Japanese maples: 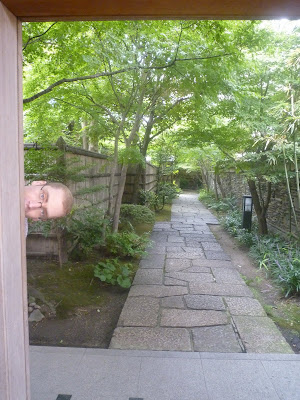 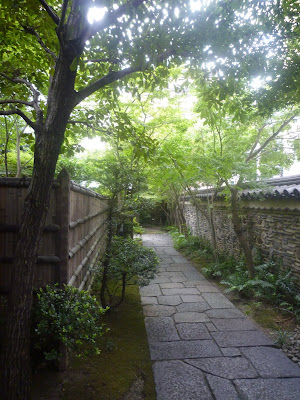 Admission to the garden is only 100 yen (about 1$). For an extra 300 yen you can have macha served in the tea room of this building: 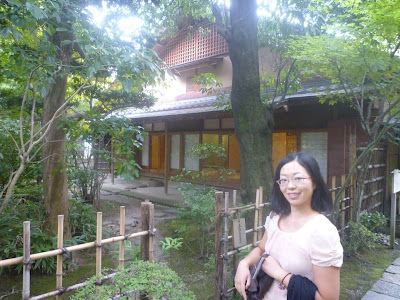 The garden is tiny but they've made such effective use of the space that it creates the illusion of expansiveness: 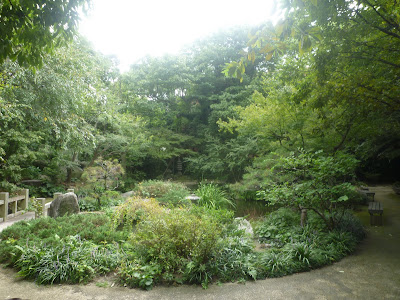 There is a path leading around a central pond: 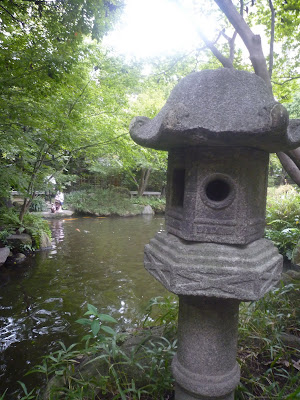 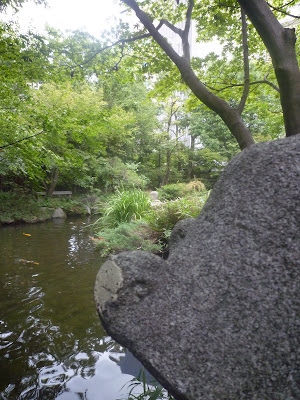 The pond is, as usual, stocked with carp that will frenzy around you if you make them think you have food for them, which we didn't. One of them did its best great-white shark impersonation for me: 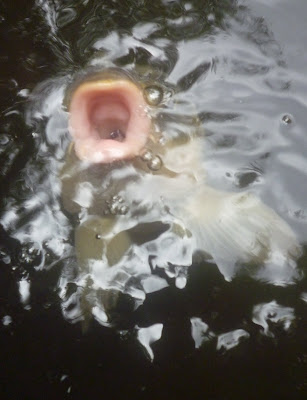 It would have been much more terrifying if carp had been a species of fish which actually had teeth. 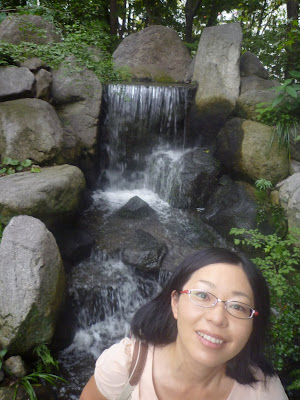 And mature tree limbs being supported by stilts: 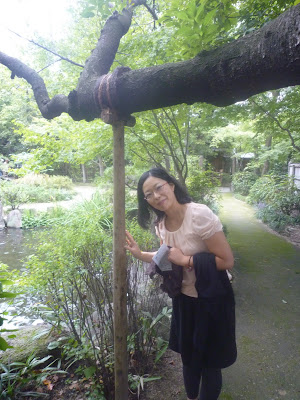 After wandering the garden for about 20 minutes we retired to the tea room to redeem our 300 yen tickets. The tea was probably good. I don't know though, I've never really taken to macha. The main benefit is that you just get to sit in a nice room and look at the pretty garden in peace and quiet, which is what I was really paying for, though Ena likes macha a lot and assures me it is extremely healthy: 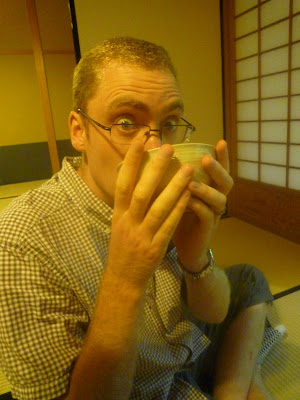 One of the benefits of buying the macha ticket is that you get access to an exclusive part of the garden reserved only for the tea room people. Actually its basically just a tiny strip of the larger garden which they have put a little bamboo fence around, but it is nice to feel like you are a VIP. The other cool thing is that you have to wear geta (old style Japanese footwear) to go into that part of the garden: 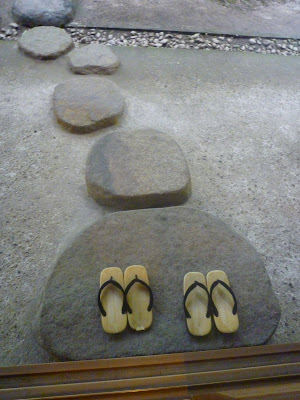 Geta are a form of footwear that do not really complement modern socks very well. Ena and I adopted different strategies to get around this. I just jammed my toes in, forcing the sock to give way, while Ena put her feet in diagonally, avoiding the risk of any potentially-damaging sock stretching: 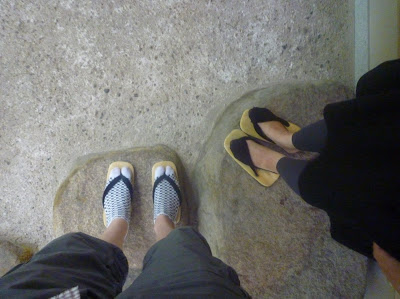 Our VIP section of the garden had a little hut we could sit in and look at the tea house: 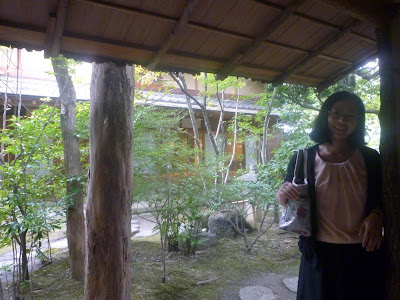 That pretty much wrapped up Rakusuien, a bonny little garden indeed. After that we cycled over to Ohori Koen where we discovered the garden to be closed. So we called it a day. Not bad for a Monday.

Our tour of Fukuoka's gardens continues in this post here.
Posted by Sean at 5:43 PM

The gardens are beautiful! Hope you can give us a "tour" of these gardens when we visit Fukuoka :) -Ava

Thanks Ava! Touring gardens is the thing to do! Let me know if you are in town!!! :)