My Rant: Canadians in Japan who don't have common sense

Pretty much every foreigner living in Japan will go through periods of culture shock where they have difficulty adjusting to their new surroundings. When I moved to Japan for the first time the company I was working for gave a lecture on this where they explained that most people experience peaks and valleys going from loving Japan to hating it and then back again in relatively short order. The longer you stay the less pronounced these mood swings become and you eventually sort of figure out your place and develop a bit of an equilibrium with the country.

Recently my attention has been drawn to the writings of a newly arrived Canadian who is clearly having some issues with Japan. Like I said, pretty much every foreigner goes through periods of hating this country (including me), but most of them only express their frustration to friends in casual conversation or perhaps emails to family back home. This Canadian on the other hand has unfortunately been given access to the English language media in Japan through which he can express his frustration. The results are some of the most obnoxious, arrogant and just plain awful articles I've ever seen. They are the type of thing that give us Canadians living here a bad name.

The first article is written as an open letter to Japan’s environment minister Tetsuo Saito to complain about the lack of wildlife in Tokyo. It was published in the Japan Times, the leading English language newspaper (Article) and entitled "Silent Spring in Tokyo". For starters the arrogance and inflated sense of self-importance it takes to write a letter to a member of the Japanese cabinet – in ENGLISH – in order to lecture him about policy issues a few months after arriving in the country is just mind-boggling (edit - in fairness this letter-style is apparently the format that the Japan Times requested so it isn't entirely his fault that it comes off as being so arrogant. Fault the Japan Times for creating a format that invites this kind of stupidity). More than that, however, the content of the letter is just awful.

First he complains that, unlike Canada, there are no “squirrels or chipmunks, raccoons, skunks, rabbits, foxes or deer” in his neighborhood. This is just stupid. For one thing, a quick search of the internet revealed that skunks have never existed in the wild in Japan to begin with and I'm guessing some of those other animals may not have either. Moreover, the author makes no allowances for the fact that he is living in one of the most densely populated urban centres on the planet. The greater Tokyo area has more than 30 million people (roughly equivalent to the entire population of Canada) living within a piece of land roughly the size of P.E.I. Any idiot with an ounce of common sense would realize that it isn’t realistic to expect flourishing wildlife within such a densely populated area.

The next article by this writer turned up this week in the Commentary section of JapanToday – one of the bigger (though certainly not one of the better) online English news sites. Here he offers us his views on what is wrong with Japanese baseball games (Article). This is what really pissed me off with this guy because I love going to Japanese baseball games and think they are great fun.

Basically what happened is he went with his son to a game and decided to buy tickets in a section reserved for fans of the visitor’s team even though he intended to root for the home team. He did so because it was cheapest ticket available. As anyone who has seen a Japanese baseball game knows some sections of the outfield seats are divided between the sections for home and visitor fans. Those seats are for people who want to join in organized cheering for their team and usually the die-hard fans sit there. For those that don’t want to take part in that cheering the vast majority of the seats elsewhere in the stadium are basically just normal seats where you can quietly watch the game irrespective of which side you like. 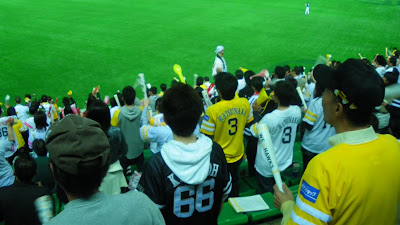 So he completely ignores the custom (and common sense) and buys seats in the visitor’s section with the intention of rooting for the home team. And – will wonders never cease – he apparently did not have a good time as a result. Unbelievably the fans – whom he derisively refers to as “cheering zombies”- were making a lot of noise and standing up to cheer, which apparently differed from the serene quiet experience he was looking for at a baseball game. To be fair I can understand how a fan of North American baseball would be surprised to see how noisy and active Japanese baseball fans are (I certainly was). But the common sense reaction to that is “oh they seem to do things different here. When in Rome….” and then just respect the difference. His reaction however is to write a bitter article attacking Japanese baseball fans and engaging in some sort of amateur cultural-psychological explanation for why the Japanese prevented him from having a good time:

“Japanese cheering sections are, like many things in Japanese society, exclusive clubs. Outsiders are rarely allowed in. That’s my explanation for what happened to us at the baseball game. Sure, we had tickets that entitled us to sit where we wanted. But the Yokohama fans didn’t want us in their section. I guess they felt they owned that part of the ballpark, and we were uninvited guests.”

Well, yes, Mike, when you completely ignore the customs that the fans have developed over the past 70 plus years of pro ball here its not surprising that you might get treated as an uninvited guest.

The only part of the article where I thought he had a reason to be upset was where he claims a woman sitting in front of him slapped his son after he stepped on her belongings. This is definitely inappropriate and would send me through the roof if it ever happened to me, though something tells me he is misrepresenting the actual facts of this encounter – especially given the fact that according to him it was the woman and not him who ended up calling security.

I'm inclined to think that this kind of cultural arrogance is in part bred by Hollywood. Last night I was watching "Angels and Demons" and it kind of struck me as ridiculous that Tom Hank's character was in any way involved with the plot. I mean, he doesn't speak Italian, German or Latin yet the Vatican authorities feel obliged to go all the way to the US and fly him straight to Rome because, apparently, there aren't any experts on Italian art in all of Italy who could help them with their investigation.

Of course its just a simple plot device because the movie is in English and they needed a reason to have the dialogue in English so why not make the main character American. But I think this sort of film also sends out a message that people in the rest of the world know nothing about their own countries and its up to Americans (and their junior partners north of the border) to go around telling them how to do things. In Japan, that results in Canadians writing terrible letters to Japanese leaders in which they state the blatantly obvious (Tokyo has less nature than Canada) and seem to expect that to resolve the problem. As though the whole country was waiting for someone to point this out and now the Environment Minister will respond "Oh my, you are right! OK....what should we do.....Oh I guess we'll just have to expropriate the homes and businesses of millions of people at a cost of hundreds of billions of dollars in order to create a bit more habitat for all those Canadian skunks and chipmunks that for some reason aren't running around the streets.....yes, that makes sense. Thank you Canada".
Posted by Sean at 12:08 AM