Sean and Ena do Fukuoka

I decided to take a break from studying today and go for a bike ride with Ena. What started out as a little ride ended up being an 8-hour cycling tour of half the city. First we went to Hakozaki Shrine, which is near the Kyushu University Campus: 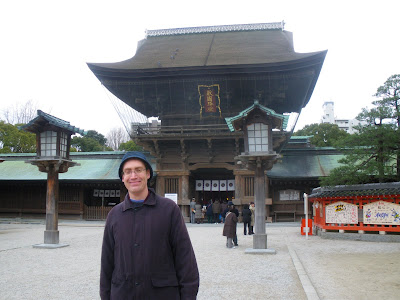 After that we rode downtown, stopping here and there to do some window shopping. We ended up at this interesting temple in the city: 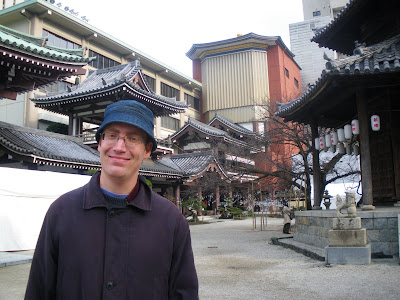 In the building behind me (with the orange walls on the side) there is a giant statue of a seated Buddha (it takes up the whole building). Under the statue there is a tunnel called "hell" tunnel. When you go in, there are a bunch of paintings of the Buddhist hell with pictures of demons eating people, etc while a recorded voice explains how bad it all is. Then after that the second half of the tunnel you have to navigate in pitch blackness. You just feel your way along by holding onto this railing. It is supposed to be a kind of spiritual experience, though its kind of scary.

All in all its probably the best free entertainment in town!

After that we stopped at Canal City for cake and coffee, which we always end up doing when we are in town.

Then we ended up cycling all the way to Ohori Koen, which is way further than I thought we would end up going. Its a really nice park with a big lake and some islands connected by footbridges. This picture of Ena was taken on one of the little islands: 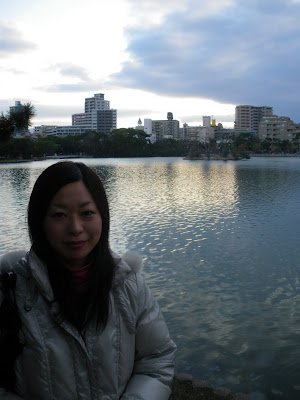 I made good use of the panorama function on my camera too:

Finally we ended up having dinner at a restaurant in Youme town, a big mall. Its crazy how much cheaper you can eat out in Japan, this whole, quality meal with drinks and dessert only set us back 20 bucks: 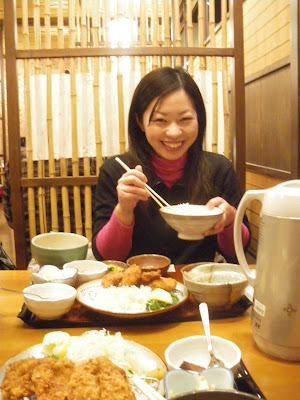