On Friday afternoon we biked over to Wajiro on a whim to see what the coastline was like over there. It turns out there is a nice sandy beach that runs for kilometres and has some great views: 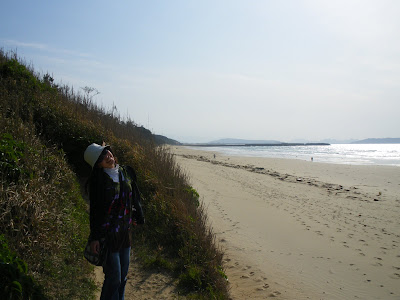 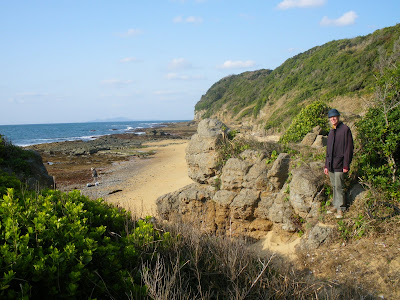 The beach is covered with lots of interesting things. We found this starfish: 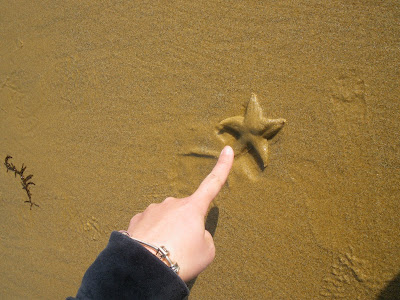 It started running away- very slowly - when Ena touched it so after we followed it around for a little while we decided to leave it alone.

The beach was also littered with hundreds of these: 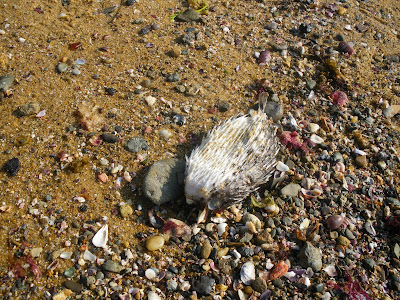 If you can't tell what that is, it is the corpse of a blowfish ("fugu" in Japanese). These are well known as delicacies in specialized restaurants, though they have to be prepared by a properly certified chef as the blowfish contains poison that is lethal to humans and an amateur chef might not know what part to take out before serving it.

I don't know why there were hundreds of dead blowfish on the beach, I guess that is just where they go when they die. These ones were porcupine-type blowfish with spikes all over their body that stick out when they inflate their bodies, allowing them to do serious damage to any predator that tried to eat them.

There was also a reasonably attractive stretch of rocky coastline: 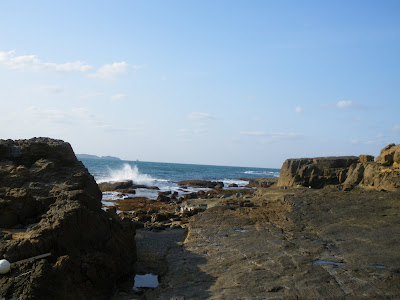 Lots of people were out collecting shellfish along this part of the coastline. The island visible in the far distance is Ainoshima, which has a small village, some ancient ruins and some attractive natural scenery on it. There is a ferry that runs out there irregularly, I think this summer we'll hop on and spend a day out there.
Posted by Sean at 7:13 PM

Email ThisBlogThis!Share to TwitterShare to FacebookShare to Pinterest
Labels: Fukuoka by Bicycle, Genkai